DSS 35: Watch the construction of the next big dish!

Over the next couple of days, you'll get to see a pretty amazing bit of high-tech construction. These three webcams are pointed at Deep Space Station (DSS) 35, the Deep Space Network's next 34-meter beam-waveguide antenna, which will see its big dish lifted atop its support structure on Friday.

Here's the current shot from Webcam 2, taken at sunset on Wednesday: 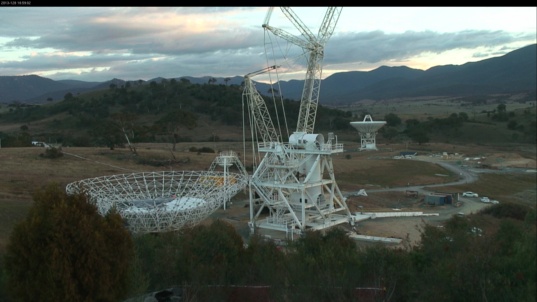 Click on the image to go to the current view from the webcam at this site.

Here's a little update on what's going on at the site from Glen Nagle:

Three major parts are now ready to be joined together in a massive operation starting in the next few days. The base structure and azimuth drives are already in place on the base track, and next to that the 34-metre dish structure and quadlegs and subreflector have been constructed.

The plan is to use a massive 600 tonne crane to lift the 125 tonne dish as a single piece and place it delicately on the base structure. Basically flying the dish more than 20 metres in the air. All going well, the next day the quad and subreflector will also be hoisted into place and bolted into the heart of the dish. A dish has never been moved as a single piece before, so it will an amazing operation to watch.

Here's a bit more background from a blog post he wrote a couple of months ago:

The first of the new antennas, Deep Space Station 35 (DSS35) began its 4-year construction cycle in September 2010. In late December 2012 it reached a critical milestone with the completion of its underground base pedestal and delivery of the major antenna structural components.

The second antenna DSS36 is currently at the ‘groundworks’ stage where a deep excavation awaits the construction of the 2-storey concrete pedestal cylinder that will house electronics and sensitive receivers.

Over the next few months, DSS35′s above ground structure will continue to grow. Most of the antenna structure will be in place by mid-2013, with ongoing instatllation of electronics and antenna calibration to continue until DSS35′s scheduled completion in late 2014. The second antenna (DSS36) will commence base pedestal construction shortly and is expected to be completed in 2016.

I've set a calendar reminder for tomorrow! This is going to be fun to watch!