I've spent a pleasant couple of hours playing with a new data set. This new data set contains images we've all seen before, taken by Deep Impact during its flyby of comet Hartley 2 in November of 2011. One of Deep Impact's cameras, the High Resolution Imager, had a defect that made its images blurry. The newly released data set is a "deconvolved" one, where they have attempted to correct for this blur. The deconvolution introduced some other artifacts -- there's no way to make these photos perfect -- but they are fun to play with nonetheless.

Here's the result of some late-night play with the image data. The original data was taken near closest approach. 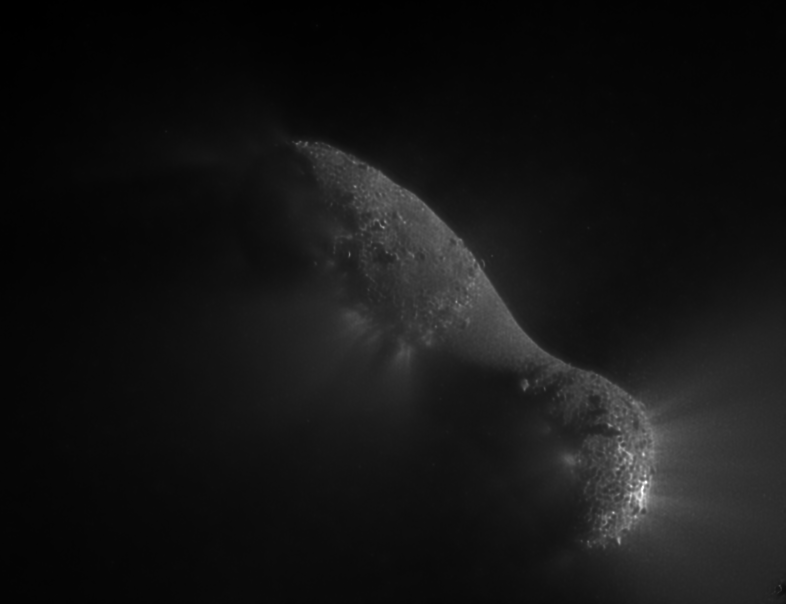 Comet images are tough to process because you want to see the jets (they are comets, after all) but the jets are inherently fainter than the rest of the nucleus. If you stretch the contrast to reveal the jets, you often wash out detail on the nucleus. It's even more of a problem with these Hartley 2 photos because of all the artifacts. I can't say there was much science to my image processing method here -- it was just futzing around in Photoshop until something happened that I was pleased with. But maybe it's reproducible.

I left the original photo more or less in its original form, and created a copy on a second layer. I stretched the contrast in that copy, which brought out the jets but also brought out all the ringing artifacts from the image deconvolution. Then I applied a Gaussian blur to the copy, which removed the rings but also fuzzed the image considerably. Then I reduced its opacity, overlaying fuzzy jets onto the sharper image of the nucleus. This is definitely more art than science, but I'm happy with how it looks.

Hartley 2 is very evidently a spiral-in 'contact binary' comet, perhaps a spin off fragment from a 100 km and larger trans-Neptunian object (TNO) when the protoTNO bifurcated due to excess angular momentum. In turn the TNO may be a gravitationally-bound fragment spun off during the bifurcation of a much-larger binary protodwarf-planet, taking us all the way back to the formation of giant planets from the bifurcation of our own protostar due to excess angular momentum of the collapsing bok globule, spinning off gravitationally-bound protoJupiter and protoSaturn fragments which themselves bifurcated as they contracted due to excess angular momentum, forming binary Jupiter and binary Saturn. Core-collapse perturbation may cause binary objects to spiral out from their binary progenitors as their close-binary components spiral to eventually merge, fueling their wide-binary 'orbit inflation'. This alternative bifurcation/fragmentation hypothesis unifies stars and planets in an identical formation process, with metallicity increasing with each bifurcation/fragmentation generation due to diffusion (volatile loss) in the pithy proto-object phase. If binary progeny spiral out of their progenitor's Roche spheres, they assume heliocentric orbits, otherwise they remain captive to become moons. Finally, most binary objects spiral in and merge, perhaps like our former binary Sun in a luminous red nova (LRN) at 4,567 Ma, forming the short-lived radionuclides from r-process nucleosynthesis and spallation and forming enriched stable isotopes (12C, 14N and 16O) from alpha-process nucleosynthesis, additionally, condensing CAIs from super-fast polar jets emanating from the core and melting chondrules from super-intense magnetic field reconnection events of the extended flare-star phase of our early Sun following the LRN.

That's the most beautiful image of a nucleus I've seen.

Excellent result! Is the completely raw data also available? It would be interesting to see if another deconvolution might handle the data differently.

Where is the spectrographic images of this body that accompany this photo? Surely they did not invest so much money just to take a polaroid? This is NOT a dirty snowball and this is a once in a blue moon opportunity for scientific research...where is the rest of the data?

Astrowalker, RichRiggs: Google is your friend. Google "deep impact hartley 2 data pds" (PDS is the Planetary Data System) and you'll find everything you're looking for.