Curiosity update, sol 227: Some sharpshooting and a dusty deck

Curiosity is back to science operations, though the activities are limited in scope by the fact that conjunction is fast approaching. (When Mars is behind the Sun as seen from Earth, our ability to communicate with our Mars spacecraft is severely limited. Because we can't get data down from them and because we couldn't rescue them if something went wrong, they have to go into a reduced activity period, performing only extremely safe operations producing a relatively low amount of data from a command sequence lasting three weeks or so.)

They've dropped one more sample from the John Klein drill hole to SAM. I noticed in a Mastcam photo of the SAM inlet tubes that the rover has really accumulated some dust over the last few months. Compare the view of those SAM inlet ports taken on sol 90: 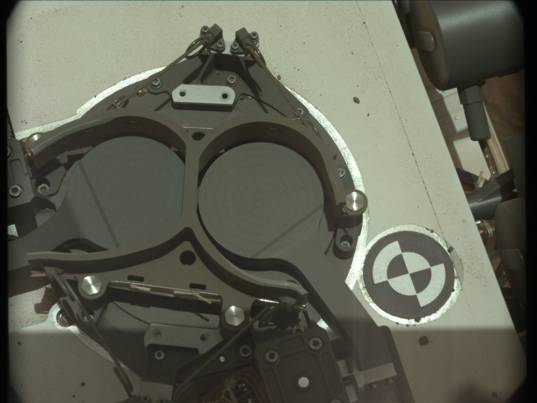 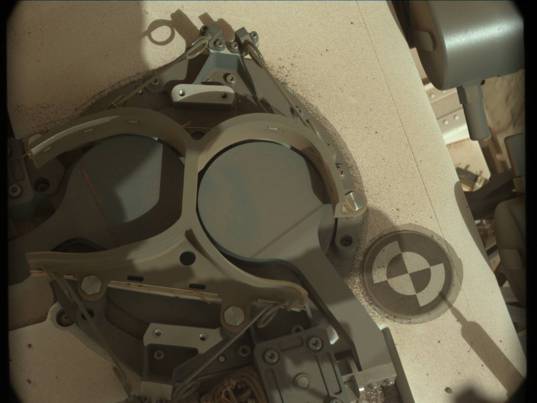 If the rover team is still a little cautious with the drill and SAM and Chemin, the ChemCam team has clearly gotten comfortable with their laser gun. Check out this bit of sharpshooting: Chemcam performed a profile up the visible wall of the John Klein drill hole, shooting at five spots inside it and one just outside it.

On sol 227 (March 27, 2013), Curiosity used its ChemCam to shoot a profile of six laser shots up the visible wall of the John Klein drill hole.

They followed this feat by strafing the tailings pile. Pew pew pew! Jokes about Curiosity's laser are never going to get old. The day I think that shooting things with a laser-equipped robot on Mars is boring is the day I should quit writing about space.

Would it be possible to use the STEREO probes as relays during conjunctions? They're perfectly positioned for it. I'm guessing they'd need an extra antenna that could be pointed at Mars in order for it to be practical. And they may not have much spare bandwidth. I wonder if anyone thought of the possibility when they were being planned?

In an inferior conjunction even the slight increase in altitude would not really make much of a difference. The viewing angle is what determines a conjunction. Conjunctions are in 4 parts. 1) Western quadrature; 2) Eastern quadrature; 3) Inferior Conjunction; 4) Superior Conjunction. 1 & 2 are at the arc of 3 on each respective limb for the farthest separation. { this is also known as Western or Eastern greatest elongation - before view blockage by the star} 4 is opposite 3 and the planet is out of communication and these definitions are based upon where the viewer is. Remember the definition is all a view point of the viewer. (to try to clarify, think of an inner planet to your planets orbit as those inner planes being inferior. If that confuses you, then ignore it). Drawing this with circles around the letter "S" for "star" and marking the points will help you see this. The only way really to obtain a full comm window is to place a S/C - spacecraft - above each solar pole so it can relay data that the planet orbiter S/C has received from the ground and sent to it.

The STEREO probes aren't slightly higher, they're orbiting the sun. They are at about the same orbital distance as Earth is from the Sun, and are currently over halfway to conjunction, themselves. They are in a great position to have line of sight to both Earth and Mars. The only problem is that I doubt they are built to act as relays. They only seem to have one high-gain antenna, so they'd have to point it at Mars to receive from Mars, then re-point to transmit to Earth, then back and forth. Not very practical. But I wonder how much more it would cost to make future probes like this with relay capabilities?

In order for one spacecraft to receive the transmissions of another, they need to be capable of "hearing" the right frequency. Mars spacecraft are equipped with special telecom hardware for the purpose of receiving, recording, and retransmitting data. I doubt STEREO is equipped with this. Also remember that the orbiters are located very close to the transmitting spacecraft. STEREO is not. It would need a very sensitive antenna (that is, a large dish) to detect transmissions from Mars.