A week ago yesterday, at the Lunar and Planetary Science Conference, I faced a choice between attending the third full session on Curiosity results or a session that covered at least eight entire worlds (including Ganymede, Europa, Dione, Rhea, Mimas, Tethys, Enceladus, and Miranda). If I may editorialize a bit: I do think it's appropriate at a science meeting to give new missions a somewhat disproportionate share of oral session time. With new data coming in from new kinds of instruments from new locations there is high potential for surprising results, observations that falsify or confirm the hypotheses that sent a spacecraft to a new place. However, I do think that three full oral sessions devoted to Curiosity results was excessive, especially given how much Curiosity was discussed in all the other cross-disciplinary Mars sessions over the course of the rest of the week. So, on Tuesday morning, I attended the icy moons session (amusingly titled "License to Chill") and enjoyed its variety!

By way of introduction, here are those eight worlds I mentioned. Ganymede, on the left, is the largest moon in the solar system, larger than Mercury. Next to it is Europa, the smallest of Jupiter's four Galilean satellites. Next to that is Miranda, the smallest of Uranus' major icy moons and the only one that Voyager 2 got great photos of. The five moons in a row below that are Mimas, Enceladus, Tethys, Dione, and Rhea, in that order -- all the round moons of Saturn interior to Titan's orbit. Although Mimas is right on the edge of "round" -- it's clearly flattened, and it has that huge divot of Herschel crater taking a bite out of its terminator at upper left. 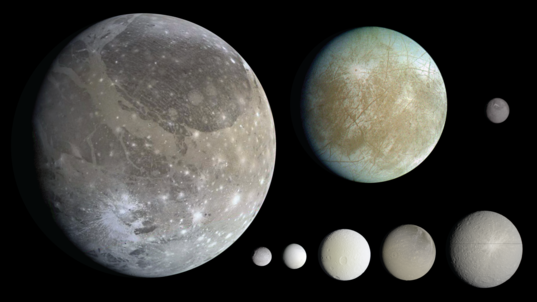 I missed the first talk in the session but was there in time for the second, given by low talker Steve Vance about the interior of Ganymede. His work concerned phase equilibria of brines containing magnesium sulfate, which doesn't sound auspicious, but the results were actually rather cool. Ganymede is unique because of its large size and density, which makes the pressure in its interior quite high compared to most other icy worlds. Like Europa, it has an outer shell made of ice, overlying an ocean of liquid water. Europa's liquid water ocean likely stays liquid all the way down to its relatively large rocky core, which is what makes it so interesting for astrobiology: warm, briny water circulating into hot rocks may generate a rich and active chemical brew. By contrast, the higher internal pressure means that at some depth, Ganymede's ocean more likely gets squeezed into different, denser crystalline varieties of ice than the lightweight ice-I with which we are familiar. Ganymede's interior likely contains ice-VI, ice-V, and maybe ice-III (sorry, Vonnegut fans, no ice-nine).

The details of which kinds of ice form and at what levels depend (in Vance's work) on two factors: the concentration of magnesium sulfate in Ganymede's ocean, and the temperature at the ocean's base. Magnesium sulfate is likely a major constituent of the dissolved content of Ganymede's ocean, and its behavior in a brine at very high pressures has been explored recently by a couple of experimenters. This is what motivated Vance's work. The ocean can actually contain quite a lot of magnesium sulfate, up to 10 percent by weight. Vance took that new data and modeled what should happen inside Ganymede for a range of temperatures. For unrealistically high interior temperatures, it's just ice-I at the top and a liquid ocean going all the way down to the core at a depth of about 720 kilometers. As the base temperature drops, you start getting a layer of ice-VI between the ocean and the rocky core. Drop the temperature some more and you get a layer of ice-V between the ocean and the ice-VI. This situation -- concentric layers of ice-I, water, ice-V, ice-VI, then rock -- is, I think, the usual notion for Ganymede's interior.

The really interesting thing happens in Vance's model when the base of the icy mantle is at a very restricted range of temperatures just above 250 Kelvin. At 255 Kelvin, you have about 150 kilometers of ice I at the top, and a thin (less than 100 km) layer of liquid, and then thick layers of ice V and VI. Just a couple of degrees below that, you start getting ice-III condensing out of the ocean. But ice III is negatively buyoant in that ocean -- in other words, it rises, "snowing" upside down. But as it rises high enough, the reduction in pressure makes it melt again. You can have a perched, slushy layer of ice III in the middle of a liquid ocean, with ice I above and ice V and VI at the bottom. Vance called this two-separate-ocean possibility a "Dagwood sandwich" internal model of Ganymede, and admitted that there's no observational evidence that it actually looks this way inside; but it's allowed by physics and wouldn't it be cool if it were there?

But what does this mean about whether Ganymede is as "habitable" as Europa? Ganymede could well have liquid, super-saline brines at the interface between its ice and its rock. But the pressure may be a huge challenge; it's even a challenge for Europa, where the ocean is much lower-pressure than Ganymede's but much higher-pressure than Earth's (or any past Mars ocean or present Enceladus sea, for that matter). Vance left that as a question mark: more data is needed! 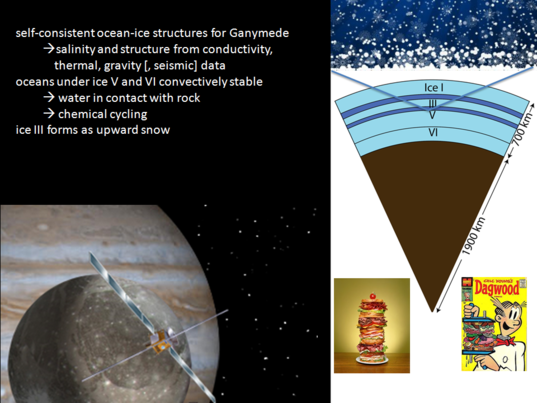 Phew, that's a lot of words on one talk -- I'd better accelerate. The next two talks, by Kelsi Singer and Krista Soderlund, were geophysical ones looking at the spacing of fractures around large basins on Europa and on the organization of whorls in Europa's ocean and how they might relate to Europa's surface features. I'm sad to say that my attention tends to wane when it comes to what seems to me to be endless reinterpretation of Galileo's limited data on Europa's surface features. It is so, so past time for us to get a new mission to achieve better imaging and other data on Europa already. Go Europa Clipper!

So the following talk, by Dan Hobley, was more refreshing. He discussed a kind of terrain found in arid, icy locations on Earth I hadn't heard of before. "Penitentes" are crazy tall skinny blades of ice that form under a very limited range of environmental conditions. For one, they form in very cold, very dry conditions (so that ice sublimates, never melts). And they also form only in the tropics, where the Sun is high enough that it can shine pretty much straight downward. With this geometry, any initial undulations in topography are amplified: the Sun shining on flat bottoms and reflecting from sloped sides of local lows in the snow accelerates sublimation from the floor; as the sides of the hollow steepen, they sublimate less and less. It's a positive-feedback process that can yield insane-looking terrain composed of east-west aligned ice blades reaching upwards of five meters in height. Why discuss this terrain? Well, if you send a lander to Europa, and you try to land it on penitentes, you're gonna have a bad time. Hobley's models showed that this kind of terrain could indeed exist on Europa, at least at low latitudes. It's like the possibility of spacecraft-swallowing dust that Apollo engineers worried might exist on the Moon: there's no proof it does exist, but it could, and we'd better make sure it doesn't before we try to land in places that could have it. 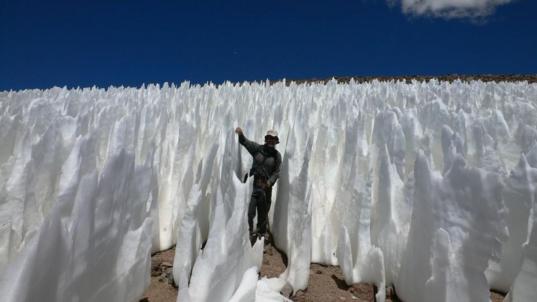 Penitentes are, according to Wikipedia, "a snow formation found at high altitudes. They take the form of tall thin blades of hardened snow, or ice, closely spaced with the blades oriented towards the general direction of the sun." These are from Argentina. More photos here.

There were a few talks that had too much data and too-wordy slides for me to get anything out of (unfortunately, these were the ones that covered most of Saturn's moons), and then a few that contained more questions than answers. Karl Mitchell tried to explain the intense brightness of Enceladus to Cassini's radar; he showed it could be due to large pore spaces inside Enceladus' uppermost ice, but then couldn't explain why Saturn's other icy moons also appear bright. An Yin argued that Enceladus' tiger stripes are left-lateral shear structures, but it seemed a nonunique interpretation. Carolyn Porco presented their latest cool maps of the locations and directions of Enceladus' jets and wondered if they were related to normal or shear stresses having to do with Enceladus' orbit; the answer appeared to be that they're sort of correlated.

The next talk that really struck my fancy was by John Weiss, who looked at the lovely image of Saturn and its rings backlit by the Sun and asked: can we learn anything about the activity of Enceladus' plumes from the shapes of the streamers visible in the E ring? Here's that famous image:

With giant Saturn hanging in the blackness and sheltering Cassini from the Sun's blinding glare, the spacecraft viewed the rings as never before, revealing previously unknown faint rings and even glimpsing its home world.

And here's a zoom in on Enceladus: 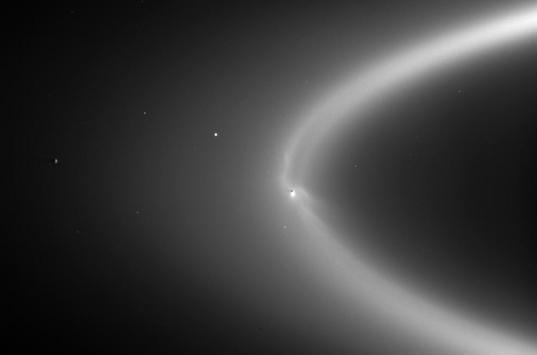 A Cassini image taken in September 2006 revealed an amazing sight: Wispy fingers of bright, icy material extending thousands of miles from Saturn's moon Enceladus and into the E ring.

Enceladus' jets make the E ring. Particles spewed forth from the jets either race ahead of Enceladus in its orbit (if they are sprayed inward) or behind it (if sprayed outward). But the peculiar combination of the direction of the jets (as shown in Porco's talk) and their location makes them wind into all sorts of fancy streamers, at least in Weiss' simulations. Their patterns bore similarities to what Cassini has seen in the rings, but there didn't seem to be anything really predictive about his model yet. The idea would be to take Cassini's observations of the shapes of E ring streamers and use those to determine whether specific jets are, or are not, active at different times. We haven't figured out yet whether they're always active or only sometimes active, and it's not clear that Cassini will be able to determine that. If Cassini could determine the activity of jets from a long way away, that might help; but while Weiss could produce some pretty cool streamer shapes in his model, the model can't yet be used to determine specifically which jets are, or are not, on.

Finally, Bob Pappalardo gave a talk that argued that Miranda and Enceladus are remarkably similar geologically. Both have three large areas that have been (or, in the case of Enceladus, currently are) geologically active. The three areas are broad regions centered at the south pole and on the leading and trailing hemispheres. Bob asked: is this a coincidence? And answered: We think not. He proposed an explanation involving late differentiation, meaning that the moons' geologic development was delayed and their cores formed late in their geologic histories. As much as I wanted to like the idea that these two similar-sized worlds in similar locations around their different giant planets had similar geologic histories, I have to admit that I wasn't sold. And it's a big problem that we've never seen Miranda's entire northern hemisphere. What else could be lurking up there?