LPSC 2013: Do we have a meteorite from Mercury?

Before yesterday, my answer to this question would be "no." Now my answer is "probably." But it's not clear if we know which of the meteorites in our collections is from the innermost planet.

Yesterday at the Lunar and Planetary Science Conference, in the middle of a session about MESSENGER's mission to Mercury, there was a presentation by Anthony Irving that posed an interesting question: do we have in our hands any meteorites from Mercury?

Dynamically speaking, it's very, very hard to get a rock from Mercury to Earth. Mercury is located so close to the Sun that you have to impart a tremendous amount of energy to blast a rock off of it and into a high enough orbit to reach Earth. It helps a little bit that Mercury is such a small planet (so its gravity is relatively low). And there's also a way in which its proximity to the Sun helps: any asteroids that hit Mercury are traveling insanely fast (between 20 and 50 kilometers per second). That would make a big enough bang to spew a lot of rocks into space. Still, it's never been considered too likely that one of them could get all the way to Earth, and then be found.

Irving said that recent work has suggested that it is more likely than we used to think. (I didn't catch who it was who did this work.) (Thanks to Kelly Beatty for pointing me to Gladman and Coffey, 2008.) That work suggests it's about 23 times harder to get a rock from Mercury to Earth than it is from Mars to Earth. Given that we've got more than 70 known Mars meteorites in our collections, that means we ought to have found 3 (give or take a couple) Mercury meteorites by now. So which ones are they?

He thinks he may have found one: NWA 7325. (The "NWA" bit means it was found in northwest Africa.) Here is what it looks like. Isn't that green rind lovely? 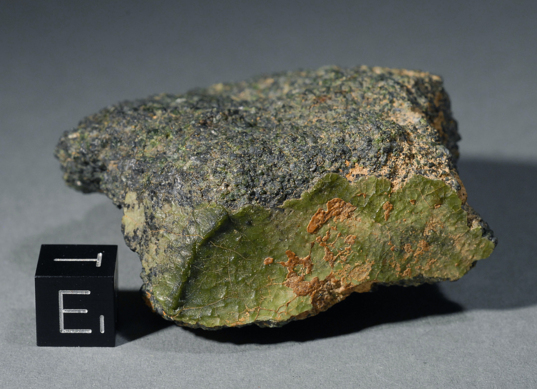 Irving explained its composition in detail. Since most of that detail will mean as little to you as it did to me, I won't try to repeat it, but there were a couple of key points. It is a stony meteorite, meaning that it's made of the kinds of minerals that occur in the rocky mantles of rocky planets. That's important because it means it is a piece of a world that was large enough to have differentiated into a rocky mantle and a metal core. But a lot of meteorites are from places like that.

NWA 7325 has olivine in it that is insanely magnesium-rich. Iron and magnesium are two elements that are almost always found together in rocks; the ions they make have the same size and charge so they happily occupy the same positions in crystal lattices. It's weird to have a rock that is so dominantly magnesium-rich. Mercury's surface rocks are known (thanks to MESSENGER) to be unusually low in iron. But that's hardly conclusive.

Irving talked about the oxygen isotope ratios. Oxygen occurs in three main flavors, with either 8, 9, or 10 neutrons in the nucleus. The 16-neutron one is the most common. The relative amounts of the different isotopes present in rocks got set when the planets formed and differ from planet to planet depending on when, where, and how they formed. If you measure the amounts of oxygen-18 and oxygen-17 in proportion to oxygen-16 in rocks, each planet's rocks bear a reasonably unique fingerprint. NWA 7325's oxygen isotope ratios do not match any known meteorites from any other planet-size body. In fact, they're not particularly similar to much of anything that we've measured oxygen isotope ratios for.

NWA 7325 is massively enriched in europium. This happens when you make a global magma ocean in which feldspar crystallizes and floats to the top of the ocean, like it did on the Moon.

Essentially, Irving's argument boiled down to: this meteorite is from a planet-sized body, but not from any of the planet-sized bodies that we know we have meteorites from. Mercury is the only planet-sized rocky body left in the solar system that we don't know of any meteorites from yet. So either NWA 7325 is from Mercury or it's from some since-destroyed biggish protoplanet from which we don't have any other meteorites.

The chemistry is not a perfect match. Irving said that the differences between NWA 7325's bulk chemistry and what MESSENGER has shown us about Mercury can be explained away. That was the weakest part of his argument, for sure. Questioners in the session clearly weren't totally convinced, arguing that if you can make NWA 7325 from Mercury, you could just as well make it from other meteorites of known composition and provenance. I have no way of evaluating the validity of either side of that argument!

For me, the biggest news from his talk was that regardless of whether NWA 7325 is from Mercury, we ought to have a couple of pieces of Mercury in our existing meteorite collections. Which ones are they?

One other note about this talk. At the opening, Irving talked about how northwest Africa is in many ways a more productive place to search for meteorites than Antarctica. You can search year-round, he said, and you don't get much help from the penguins in Antarctica in looking for meteorites. The story is different in northwest Africa, he said, and showed a slide of several Berbers in ethnic garb reading a meteoritics journal. The audience (including me) laughed, because it was a surprising image. But there was no mockery in his intent. He said that many Moroccan residents of the deserts that preserve meteorites are learning a great deal about the value of these rocks not just financially but also scientifically, and are interested and willing participants in the scientific enterprise of finding and interpreting space rocks. They're citizen scientists. And are much more helpful than the penguins!

hi, Emily... that work regarding the likelihood of meteorites from Mercury reaching Earth is a 2008 analysis by Brett Gladman and Jaime Coffey: http://arxiv.org/ftp/arxiv/papers/0801/0801.4038.pdf I think one key test will be the crystallization age of NWA 7325 -- and whether that matches the presumed age of Mercury's current crust.

We apparently do have a rough crystallization age: http://www.mail-archive.com/meteorite-list@meteoritecentral.com/msg111895.html To be frank, the same thing was said about angrites and aubrites, and nothing has really ruled those groups of meteorites out yet (with certainty). These claims aren't groundless, but trying to pin a meteorite on Mercury is really reaching given the data we have at the moment. It's like trying to claim that HED's are from Vesta. The spectral data from Dawn tells us that Vesta is a differentiated body with a felsic surface and more mafic rocks exposed in crater floors, but we have numerous HED-like meteorites with distinct O-isotopic ratios that could have been sourced from such a body. So...this is an interesting hypothesis, but I wouldn't give it much more thought until we bring samples back. Or find a meteorite that really fits the bill. This one's a better match than previous ones, but there are still some quirks that say 'probably not.' So, NWA 7325 is probably not from Mercury. Could be. But probably not. Stunning ungrouped achondrite, though.

Hi Emily-- Minor correction on the O isotopes: their atomic masses (not their numbers of neutrons) are 16, 17, and 18-- with 8, 9, and 10 neutrons respectively. Interesting article!

Thanks for the link, Kelly, and for the correction, Kevin!

ASTEROIDS, COMETS, AND METEORS ORIGINATED FROM EARTH: In the Earth's past there were powerful volcanic explosions propelling millions of tons of earth soil and rock (now asteroids and meteors which may contain organic molecules or organisms) into space. Read my popular Internet article, ANY LIFE ON MARS CAME FROM EARTH. The article explains how millions of tons of Earth soil may exist on Mars, and how debris we call asteroids and meteors could have originated from Earth. According to a Newsweek article of September 21, 1998, p. 12 that quotes a NASA scientist, SEVEN MILLION tons of Earth soil may exist on Mars! How could this be possible? Read and find out. Even if the right chemicals exist, life cannot arise by chance. The molecules that make-up life have to be in a sequence, just like the letters found in a sentence. Please read my popular Internet articles listed below: SCIENCE AND THE ORIGIN OF LIFE, NATURAL LIMITS OF EVOLUTION, HOW FORENSIC SCIENCE REFUTES ATHEISM, WAR AMONG EVOLUTIONISTS (2nd Edition), DOES GOD PARTICLE EXPLAIN UNIVERSE'S ORIGIN? ANY LIFE ON MARS CAME FROM EARTH, NO HALF-EVOLVED DINOSAURS Check out my most recent Internet articles and sites: THE SCIENCE SUPPORTING CREATION and WAR AMONG EVOLUTIONISTS (2nd Edition) Babu G. Ranganathan* B.A. Bible/Biology Author of popular Internet article, TRADITIONAL DOCTRINE OF HELL EVOLVED FROM GREEK ROOTS *I have given successful lectures (with question and answer period afterwards) defending creation before evolutionist science faculty and students at various colleges and universities. I've been privileged to be recognized in the 24th edition of Marquis "Who's Who in The East" for my writings on religion and science.

i have some that meteoret i have 71 grams i swear i'm from western sahara and i live in the same place when thats stone founded i can send some photo about it this my mail western8sahara@gmail.com