Reports from the Lunar and Planetary Science Conference

Here's a list of links to all the reports I've filed from the Lunar and Planetary Science Conference.

I depart tomorrow for Houston and the annual Lunar and Planetary Science Conference (LPSC). This is my favorite meeting of the year, a couple of thousand planetary geologists gathering to share their latest work and also just to catch up with friends. In a story that Casey is following, there will be significantly fewer federally-funded scientists attending LPSC than expected, due to travel restrictions imposed by the stupid, stupid sequester. (If you have been denied LPSC travel, I want to hear from you -- I'm thinking about ways to get your science out there.) But there'll still be too much great science going on for me to follow it all. 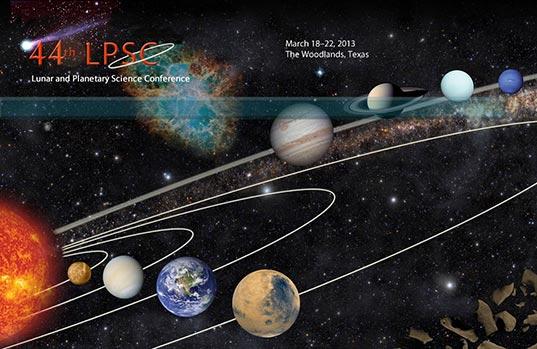 Thankfully, I'll be getting more help this year in following what's going on than I have done in past years. LPSC is trying out a new thing, having officially sanctioned "microbloggers," attendees who get access to the limited available wireless bandwidth in exchange for having promised to put out information about the conference through a variety of social media channels. (This is a challenge because the Woodlands Waterway Marriott is in all ways an excellent meeting venue except that there's like no network or cellular data capacity for some reason.) I am working on a list of people who I know will be Tweeting from the conference (not all of whom are officially blessed ones); it contains about 45 people now, and I'll add to it continuously. Here are a few others that I know of who will be sharing the conference through other means. If you know of any others, please let me know in a comment or email, and I'll update this post. I, of course, will be tweeting like a maniac.

OK, now for the schedule. This is going to be an especially Mars-heavy LPSC for me, so I'm hoping that some of those fine microbloggers will be sharing notes from other sessions. Here's where you'll find me during the week:

Monday: Curiosity all day long. Morning and afternoon sessions with a press briefing in between. Press briefings will be Livestreamed, so you can watch them, at noon Central time on Monday and Tuesday. Because Curiosity is such a hot topic I can't even consider going into other rooms like the lunar session in the morning or the planetary cartography, volcanism, or tectonics sessions in the afternoon, so I'm looking forward to people's tweets from those rooms.

The meeting day is followed by "NASA Night" at 5:30, which will be unusual this year because Jim Green and other people from NASA HQ are not going to be able to attend physically, due to the aforementioned travel restrictions. (Obviously as NASA leaders they could've chosen to attend, but they gave up their spots to allow more scientists to travel. Good on them.) So conference attendees will be there physically, but Jim will be Skyping in his presentation. That will also be Livestreamed.

Tuesday: There is a third Curiosity session in the morning, all of it devoted to the "Rocknest" sand dune. I recognize why the team wants to devote so much attention to it but I think I will go instead to a parallel session covering all the icy moons of the outer solar system. There's a GRAIL/Lunar Reconnaissance Orbiter press briefing at lunchtime. (Again, Livestreamed.)

Wednesday: Again, a hard choice, among Dawn at Vesta; MESSENGER at Mercury; or water on Mars. I think I'll do what I can to cover Vesta in the poster session, and probably attend mostly MESSENGER, because Thursday will be a Mars-water-heavy day. Wednesday afternoon I will take a mental health/writing break before serving on a panel at the Women in Planetary Science event and then speaking at FameLab.

Wanted to leave a comment and thank you for your blog. I find it full of relevant and timely information but also refreshingly personal and engaging. I'm not only learning a lot but also getting to know you at the same time. Keep up the good work.

Jere and David, thank you so much, that's very kind of you to say!

I have been fortunate enough to meet Emily in person. And I have to say, she is even more "personal and engaging" face to face! I'm really looking forward to the tweets from LPSC.

Thanks, Dr. Lakdawalla. I really appreciate reading your posts here. If you run into any NASA folks, tell them we need astronauts that can tweet like CDR Hadfield! He tweets like a boss!