Will comet Siding Spring make a meteor shower on Mars?

Last week I posted about a newly discovered comet that will be making a very close approach to Mars on October 19, 2014. Right now, JPL's Solar System Dynamics group shows that there is still a possibility that C/2013 A1 (Siding Spring) could hit Mars. But the uncertainty in its position at that time is large -- the closest approach could happen an hour earlier, or an hour later -- so we're a long way from knowing yet whether it will or (more likely) won't impact. 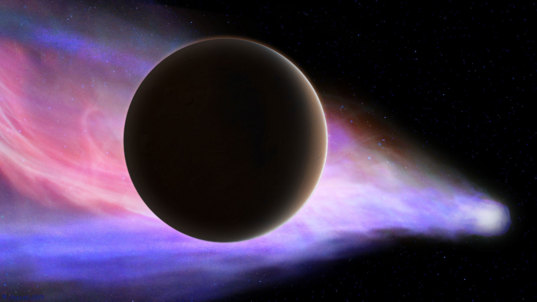 If it did hit, it would be a very bad day for everything orbiting and roving Mars; Phil Plait has considered that possibility. I'm not as preoccupied with death and destruction as Phil is, so I'm not focusing on the extremely unlikely impact risk. But I was worried about the risk posed to our spacecraft by the cloud of debris that accompanies a comet, so I wrote to a comet scientist friend to ask for help. She passed my questions on to astronomer Mike Kelley, and now I'm not nearly as worried as I was last week. It seems to me that the comet will have to be very, very close to Mars for its debris to pose any real risk. Here's what Mike told me.

This is an interesting case to consider. As you already know, the uncertainty in the orbit does allow for an impact, but there is a lot of wiggle room and, for the moment, this case seems unlikely. However, you make a good point; we should consider if the dust could produce a Martian meteor shower. This scenario reminds me of the occasional meteor storms that occur on Earth after a close comet flyby. One that comes to mind are the meteor storm of Comet 21P/Giacobinni-Zinner in 1933 and 1946, when Earth passed the orbit of the comet shortly after the comet had been there. Thousands of meteors per hour were observed in these events.

With this in mind, I examined the distance between Mars and the comet's tail. The comet is currently predicted to pass Mars at a distance of about 100,000 km. Unfortunately, the comet's tail is more or less pointed away from Mars during the close encounter. In other words, it doesn't really come any closer to Mars than this distance.

So, can the coma be ~100,000 km in size? If small dust grains are ejected at a few tens of m/s, it only needs to be ejected a month or two before the closest approach to Mars to travel this distance in the absence of radiation pressure. But accounting for radiation pressure any dust this old will be pushed far down the tail, and since the tail is pointed away from Mars... no meteors. I ran a short 3D simulation that agrees with this assessment. The coma has already evolved into a tail well before it travels 100,000 km.

You were also asking about millimeter-sized grains. These will be ejected with lower velocities, perhaps only a meter per second or less, and would take more than a year to travel 100,000 km from the comet in the absence of radiation pressure. Again, once we consider radiation pressure, and giving it a year to act on the dust, even grains this large will be pushed quite far down the tail.

So, in short, I'm not predicting anything spectacular for Mars, but I hope I'm wrong! If the closest approach distance decreases significantly, then we may have to revisit this experiment with a more careful treatment.

Is there or has there been a plan to attach a probe to comet--I realize that it is a pretty hostile environment but it might be pretty cool to catch a ride through the solar system.

While the spectacle of a meteor shower might not be expected, spectacular global-wide auroras are likely to be observed from the vantage point of the Mars orbiters and rovers. Cometary comas are on the scale of 100,000 kilometers in diameter. Assuming the present nominal closest approach of 33K km, the coma would impact the upper atmosphere of Mars, globally. The sequence of Auroral events might begin with a global red glow from excited atoms/molecules returning to ground state. When the bow shock draped around Coma strikes the Martian atmosphere, there could be bands/arcs of higher energy emissions in blue and green stretching thousand of kilometers and then followed again with a global aurora in red. Given both our Rovers are in good health, at least one of them will take spectacular night time imagery bathed in auroral lights. The actual passage of the nucleus of the comet (the rocky body) will be most spectacular during a relatively short span of perhaps 4 to 6 hours. And again most spectacular for one of the Rovers considering they reside on opposing sides of the red planet. The interaction of Mars' atmosphere with the cometary coma would act like a planet-sized probe; potentially revealing to us a distinct morphology of the comas neutral particles and ions. Additionally, if all goes as planned, the next Mars mission - MAVEN will arrive one month before the Comet's closest approach. JPL will be faced with performing a swift checkout of the instruments and quick start-up of the Science phase of the mission. MAVEN is designed to specifically study the Martian atmosphere and its instrument suite will be perfect for studying the Comet Coma and Martian atmosphere interaction. MAVEN, like all Mars launches will have a 1 or 2 week window and depending on the day and time it launches, the probe in an elliptical orbit could itself have a very close brush with the comet - maybe desirable, or view the grand event from a safe vantage point. JPL Small Body dB: http://ssd.jpl.nasa.gov/sbdb.cgi?sstr=2013A1;cad=1#cad [my graduate work was in the plasma physics, specifically ionospheric, magnetospheric particle-field interactions]

@the nucleus of the comet (the rocky body) really? No water in it?

As I recall most comets have two tails, the smaller directly opposite the main one. Why would this smaller one not affect Mars?

Sorry, did some current reading on comet tails and see my memory is quite out of date. I see comets have three tails and the anti only appears to be opposite when viewed from the Earth. But I still wonder if one of these other tails might result in a meteor shower on Mars.

ASTEROIDS, COMETS, AND METEORS ORIGINATED FROM EARTH: In the Earth's past there were powerful volcanic explosions propelling millions of tons of earth soil and rock (now asteroids and meteors) containing organic molecules. Read my popular Internet article, ANY LIFE ON MARS CAME FROM EARTH. The article explains how millions of tons of Earth soil may exist on Mars, and how debris we call asteroids and meteors could have originated from Earth. According to a Newsweek article of September 21, 1998, p. 12 that quotes a NASA scientist, SEVEN MILLION tons of Earth soil may exist on Mars! How could this be possible? Read and find out. Even if the right chemicals exist, life cannot arise by chance. The molecules that make-up life have to be in a sequence, just like the letters found in a sentence. Please read my popular Internet articles listed below: SCIENCE AND THE ORIGIN OF LIFE, NATURAL LIMITS OF EVOLUTION, HOW FORENSIC SCIENCE REFUTES ATHEISM, WAR AMONG EVOLUTIONISTS (2nd Edition), DOES GOD PARTICLE EXPLAIN UNIVERSE'S ORIGIN? ANY LIFE ON MARS CAME FROM EARTH, NO HALF-EVOLVED DINOSAURS Check out my most recent Internet articles and sites: THE SCIENCE SUPPORTING CREATION and WAR AMONG EVOLUTIONISTS (2nd Edition) Babu G. Ranganathan* B.A. Bible/Biology *I have given successful lectures (with question and answer period afterwards) defending creation before evolutionist science faculty and students at various colleges and universities. I've been privileged to be recognized in the 24th edition of Marquis "Who's Who in The East" for my writings on religion and science