A forgotten image of Earth and the Moon

I was digging into ESA's Rosetta mission archives and stumbled upon an image I don't remember seeing before, from Rosetta's first Earth flyby. It's striking how dark the Moon is. The Moon is considerably darker than Earth (or at least Earth's clouds) to begin with; and we appear to be looking at Procellarum here, so it's a particularly dark bit of the Moon. The image as posted on the ESA website was pretty raw, so I did a little work on it. Just imagine arriving from out of deep space and careening past Earth, seeing the Moon swing suddenly above the horizon and then, minutes later, watching everything recede into blackness again. 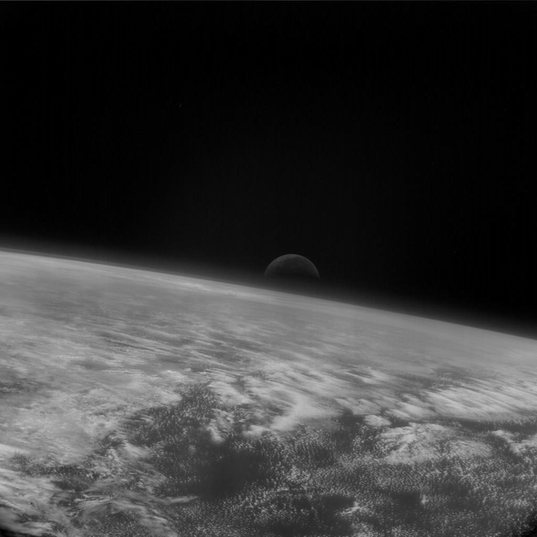 As Rosetta flew past Earth for the first of two gravity-assist flybys on March 3, 2005, one of its Navigation Cameras caught the Moon rising above the Pacific. The photo was taken at 22:06 UTC, just three minutes before its closest approach.

I checked ESA's Planetary Science Archive and there's lots of other navigational camera data from the Earth flybys though I think it's pretty safe to say that this is the most awesome image from the first flyby. The rest showed at most one world. This one is twice as nice because it contains two!

This photo reminded me that I have more work to do to import images from our old website. I used to have a great collection of photos from Earth taken by interplanetary spacecraft, and I'm working to reassemble it. Here's a particularly cool series taken by Galileo as it departed from its second Earth flyby -- the last time it would ever be close enough to Earth to achieve high enough data transmission rates to be able to relay movie frames. I like watching the shiny specular reflection of the Sun off of Earth's oceans, how it stays motionless while Earth rotates under it, and how it flickers brighter and dimmer as it crosses water and land.

As Galileo receded from its ssecond flyby of Earth on December 16 and 17, 1992, it captured this sequence of Earth rotating as the Moon zipped by on its orbit. There are 56 frames in total, each separated by 15 minutes, spanning about 14 hours.

I keep wondering whether the two bright specks that flash about a quarter of the way along the moon's trajectory, are either cosmic rays or stars. They become visible simultaneously one just above the moon and the other half way down to the left a bit. There is a couple more along the way. I've misidentified flashes like that before when they've actually been cosmic rays.

Thanks for sharing your find with us.

I can't think of having ever seen an image in which the Moon is in front of the (wholly or partly) illuminated disk of the Earth, so that it would be easy to judge the relative brightness of both bodies. Does such an image even exist?

@Andrew: they are cosmic ray hits or data transmission errors. @David: Yes, it does! Deep Impact got such a photo. I don't have it in my archives right now. It's worth a blog post; stay tuned for that!