Today is a day of remembrance for NASA: the tenth anniversary of the loss of the space shuttle Columbia during its return to Earth. A year after that terrible day, the seven astronauts were honored in names of landmarks visible far away on the eastern horizon of the Mars Exploration Rover Spirit, which had landed on Mars only a month previously. 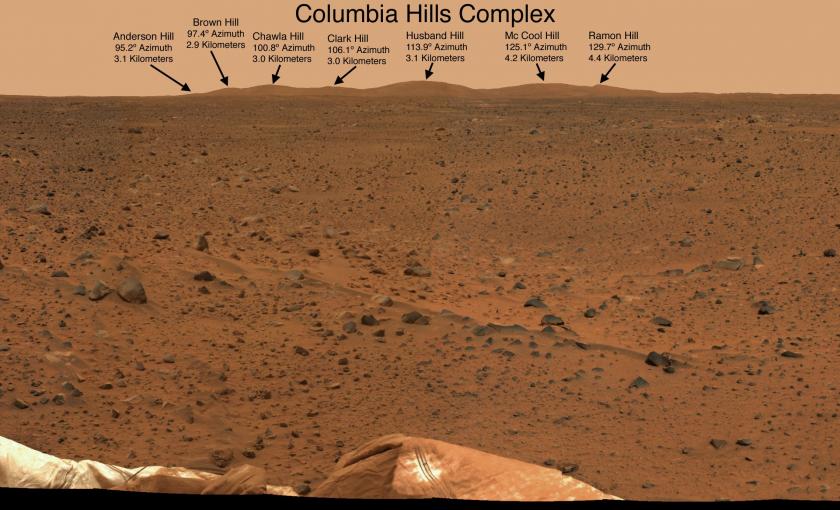 On February 2, 2004, NASA Administrator Sean O'Keefe announced that the seven astronauts lost with Space Shuttle Columbia on February 1, 2003 would be memorialized in the names of seven hills seen on Spirit's eastern horizon.

Naming landmarks after fallen heroes is something that people like do do, but I don't usually find much comfort in it. Having a constant reminder of the potential downside of our attempts to go beyond our limits makes us mindful of safety but it can also make us timid and prevent us from accepting risks that we need to take in order to do new things that we've never done before. That's why what Spirit did next was so wonderful. A year and a half later, Spirit's horizon was totally different. Because Spirit had climbed those hills. It wasn't something a Mars Exploration Rover had ever been expected to do -- but the mission tried, and then, they succeeded. That, I think, was a much more fitting tribute to the memories of people who died in the act of trying to expand our horizons.

I miss Spirit, too. Here's her view from the summit of Husband Hill. Her tracks point back toward her landing site, and her pole antenna points toward the Inner Basin and Home Plate, where she made discovery after discovery.

This is the Spirit Pancam "Husband Hill Summit" panorama, acquired on sols 583 to 586 (24-27 Aug 2005), shortly after Spirit completed its climb to the summit of Husband Hill. This is the largest panorama yet acquired from the Spirit rover. This panorama provided the team's first view of the "Inner Basin" region (center of the image), including the enigmatic "Home Plate" feature seen from orbital data. Spirit arrived at the summit from the west, along the direction of the rover tracks seen in the middle right of the panorama. The peaks of "McCool Hill" and "Ramon Hill" can be seen on the horizon near the center of the panorama. The summit region itself is a broad, windswept plateau. Spirit spent more than month exploring the summit region, measuring the chemistry and minerology of soils and rocky outcrops at the peak of "Husband Hill" for comparison with similar measurments obtained during the ascent before descending into the Inner Basin.