What do you do when your spouse is out of town, your children are asleep, and you're annoyed at the world because you've been sick with a cold and sinus infection for two weeks straight with no recovery in sight? Here's what I do: have a few drinks, eat some chocolate, and play with archival space image data. Here's the result of this evening's self-indulgence. Those of you who follow me on Twitter saw the intermediate steps in the process of producing this photo (steps 1, 2, and 3). 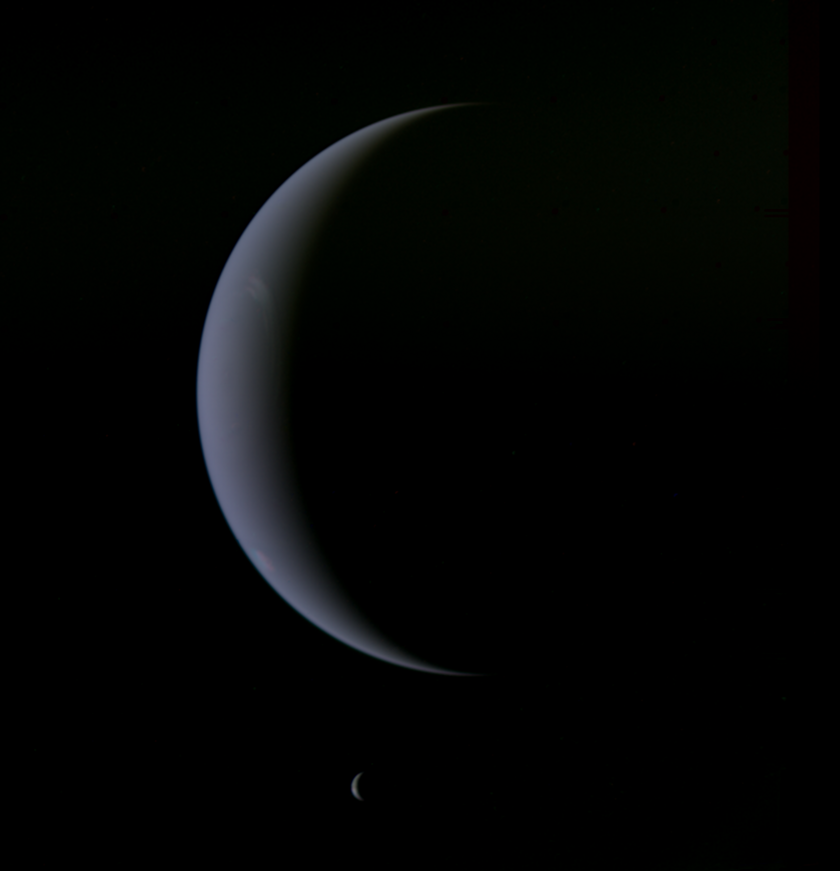 Voyager 2 is the only thing we have ever built that has ever seen this huge planet (and its huge moon Triton, not quite but almost as big as our Moon and Europa and larger than Pluto or Eris) from this perspective. There is no government (or private company, for that matter) with any plans ever to do this again. The photos we have from Voyager are very likely the only ones of Neptune from Neptune that I will see in my lifetime. I hope not. I hope we'll go back and get better pictures. Until that happens, we'll have to do the best we can with what Voyager 2 sent us. The good news is, there's a lot more in the Voyager 2 data archive than most people have ever seen. There are 10,000 photos, and while not all of them are great, it's not hard to look at them all to find the great ones.

Serene. Neptune imparts a feeling of regal calm in this image. I'm glad to be in a time period that allows me (us), to see our solar system and its realm in these historic and personal ways. The hours I sit with my telescope, the discoveries and news coming back from the current missions, visiting a planetarium, hanging out with others weekly on the web, all combine to create an ongoing experience that is as wondrous as it is unique. :)

I feel for you! - I'm just over that illness. I'm glad that I'm of the generation that was able to see the Voyager images for the "actual" first time. - Two amazing machines....

I still think the Voyager 2 imagery of both the Uranus & Neptune systems absolutely amazing. Hindsight is a wonderful thing, I think it was a foolish decision to sacrifice Voyager 1 for Titan. Pioneer 11 did drop a big hint that Titan was shrouded by thick haze. Voyager 1 should have gone on to Uranus & Neptune too, two spacecraft, two trajectories, perhaps much of the other side of Triton could have been seen at high resolution, perhaps a closer pass of one or two of the other major moons of Uranus would have been possible, perhaps Titania or Oberon? Perhaps the Pluto option would have been kept open instead. Hindsight is a wonderful thing. Lovely view of Voyager 2 was looking back, as the spacecraft started heading south out of the solar system in the direction of the small southern constellation Telescopium the Telescope. :)

Emily watch those first two steps, you will become a fat alcholic! lol! the last step crunching space data is great..oh forgetaboutit! drink, eat and be merry..maybe you will help find ET quicker!

Hi Andrew and others - Just an FYI -- VGR-2 went to Uranus only because VGR-1 succeeded at Saturn and the budget tightening was slacked enough to pad up so VGR-2 could actually go to Uranus and eventually Neptune. The initial plan came out of Mariner 11 & 12 but due to that far out distance, design upgrades of such need, pretty much left us with a new spacecraft. Therefore Mariner 11, 12 & 13 were renamed VGR-771, 772 & 773. 773 was the backup so this could be a twin spacecraft mission To avoid a longer story, VGR-772 & 773 were the ones that actually flew and 771 ended up on the museum circuit instead. Basically budget issues then as today drive what NASA is permitted to do. Yes that is unfortunate. Also both S/C suffered serious science failures around Jupiter time and post Jupiter time due to the radiation belts at Jupiter. Uranus and Neptune almost did not happen. With the budget availability and American ingenuity Neptune became an option with the spacecraft 772 which an ABC reporter, Lynn Sherr, gave the nickname for VGR-772, "The Little Spacecraft That Could." I dug up this history link at NASA.GOV in case anyone wants to read about the history of Voyager: http://history.nasa.gov/SP-4219/Chapter11.html -- there are other links. In the search box under "Solar System" I searched on voyager 1 trajectory decision post Saturn

note: in NASA publishing parlance SP stands for Special publication. These are publications generally done by the GPO (Gov't Printing Office). Ex: SP-4219 That's how the publications are located. (or so back in the day)