They're getting closer and closer to drilling. Curiosity now seems to be positioned in the spot where they plan to be when they execute that long-awaited first drill. Here is the scenic view, in a panorama mostly captured on sol 168. Then I guess they figured they were going to be here for a while, so it'd be a good idea to aim the camera a bit higher to take in all of the mountain; they filled in the peak on sol 169.

On sol 168, Curiosity took in the view of "Yellowknife Bay" in the foreground and the distant peak of Mount Sharp in the background. The "John Klein" sampling area is within reach of the robotic arm, which has pressed the APXS elemental analyzer against a spot of bedrock.

Here's a lovely high-res color view of the same moment. 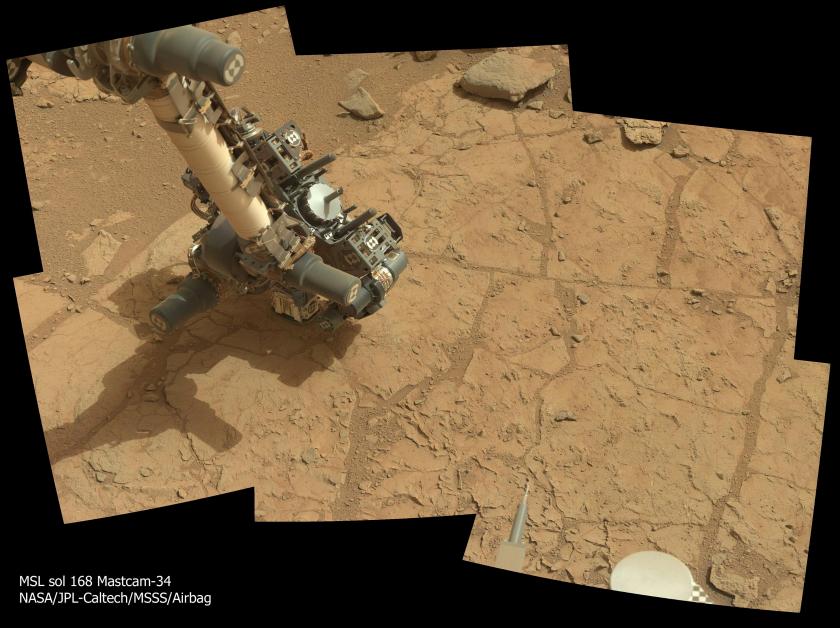 On sol 168 (January 25, 2013), Curiosity was beginning the lengthy process of analyzing and then sampling John Klein. Here, the APXS (Alpha Particle X-Ray Spectrometer) is pressed against the rock.

On sol 171, they finally, for the first time, pointed the drill at rock. They haven't drilled anything yet, though. First, they have to make sure that they can hold the drill stable. The way they do that is with two nubbly-ended prongs on either side of the drill. In these views, taken during a checkout of the instruments a while ago, the prongs are retracted out of the way: the drill bit assembly has been extended outward beyond the prongs, but it doesn't ordinarily look like that, as you'll see below: * 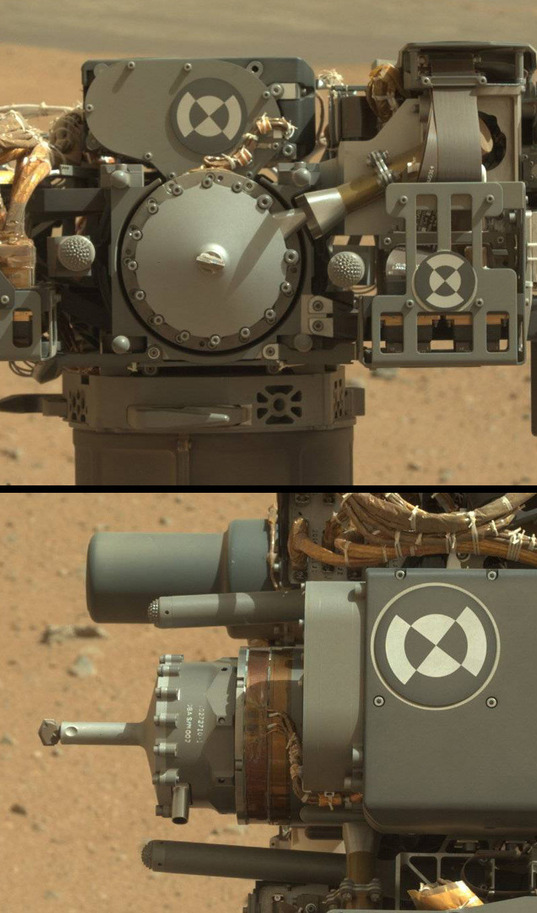 Now here is a Hazcam view from sol 171. The Hazcams are mounted low on the front and rear of the rover where they can see the wheels and the "work volume" for the robotic arm. As the positions of the shadows show, the two prongs on either side of the drill bit are touching rock. This is how Curiosity prepares to drill, by shoving those two prongs hard against the rock; it will give the robotic arm a stable grip on the substrate when it's time to do the deed. 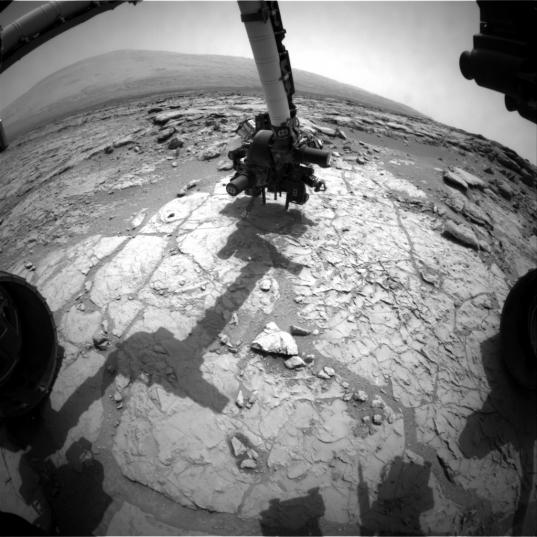 On sol 171 (January 28, 2013), Curiosity positioned the rock drill against a target for the first time. In this photo, the arm is pressing two prongs on either side of the drill against the rock. The drill bit itself is not contacting the rock.

The arm presses on the rock with, typically, 300 Newtons of force. That would be the force of something weighing 30 kilos pressing down under Earth gravity; really not all that different from the kind of weight I might apply to a board by leaning on it on a sawhorse as I prepared to saw it or drill it. According to Ken Herkenhoff of the USGS, the rover positioned and "preloaded" the arm in four different locations on sol 171 (and indeed each of those four locations is documented in Hazcam and Navcam photos. It kept the arm in this preloaded state overnight. I'll let Dan Limonadi explain why they are going through this exercise. The following is excerpted from this post in his wonderful guest blog series on sampling Mars.

Is that rock going to move? In order to stabilize the arm and rock for the drilling operation, the Curiosity robotic arm is designed to preload the drill against the rock with a minimum of about 300 Newtons of force. But to ensure this minimum force, we might apply a preload to the rock as high as 400 Newtons or more (this is close to 100 pounds of force: there are 4.45 Newtons per 1 pound force).  For vertical or bedrock drilling activities, we don’t need to worry as much about the size of the rock, though the rock still needs to be large enough to accommodate the drill contact prongs with some margin, and if we have a rock sitting on soft regolith it might need to be relatively large to avoid sinking during the drilling activity.   However, when the science team wants to drill horizontally or with any significant horizontal component, we have to look at the rock and guess at how well it might be anchored in the terrain or how heavy it might be before we can give a green light for drilling. If we determine that the rock is important but we aren’t sure the rock can support the force required for drilling, we have the option of pushing on the rock with the arm/drill combo to see if it stays put, crumbles, or moves before committing to the actual drilling operation.

Is the rover going to slip while we are at this location? Curiosity is much larger than Spirit and Opportunity, and has an aluminum chassis, compared to the Spirit / Opportunity rovers, which have a carbon-fiber composite chassis.  An interesting side effect of these seemingly mundane differences is that during the diurnal 100 degrees Celsius thermal swing, the rover aluminum chassis and titanium mobility system end up growing and shrinking a total of roughly 4 millimeters (about one sixth of an inch).  It might not seem like it, but this is a pretty big number!  It is big enough to make us worry about vehicle stability from one sol to the next if we are on terrain that might pose a slip risk – e.g. being on a significant tilt, on “slippery” terrain like flat bedrock, or even not-so-slippery terrain if it has lots of little bumps where the wheels might slip off of during the diurnal cycle.

Why do we care if we slip?  If the arm has not placed any turret tools into contact with the ground then we generally don’t worry about it. However, if the drill is on or in a rock or other tools are in contact with regolith or rocks we need to think through whether or not we might slip and whether any hardware might be damaged if the rover does slip.  It is relatively easy for us to figure out what the damage threat is from a certain fixed magnitude of slip, but it is very difficult to judge whether we think we will actually slip enough to cross a damage threshold.  It is important to note that we will always slip a little given the huge forces put out by thermal expansion and contraction of the hardware.

So, what do we do?  Early in the mission, while we are characterizing how the vehicle behaves on Mars at temperature (roughly the first 3 months or so) we will restrict ourselves to sampling operations at tilts below about 7 degrees and will stay off anything that we think poses a high slip risk.  As we get data from rover operations and how the vehicle actually behaves on the Martian surface, we will open up the envelope to the full 20 degrees for sampling and 30 degrees for contact science activities (contact science is just using the DRT, MAHLI, and APXS on surface targets, like what Spirit and Opportunity did with their robotic arms).

After performing the preload tests, they used MAHLI (the camera on the end of the arm) to investigate the rock where the prongs were pressed against it. The sharp-eyed guys over at unmannedspaceflight have spotted seven of the eight prong placement points. Here's one nice little before-and-after example.

Placing the drill prongs on rock: before and after

As a postscript, one significant thing that's happened since I last posted a Curiosity update is that they've incremented the site counter to 6. What do I mean by that? Take a look at a representative Navcam filename:

There are two long strings of numbers in this filename. The first one, 411614718, is a counter, counting up time in seconds. The second one, 0051986, is actually two numbers, one denoting the "site" (005, in this case) and one denoting the "drive" (1986). The drive number increases each time the rover is commanded to move a wheel. That number is handy because it can help you figure out sets of images that should have the same perspective on the surroundings. Pieces of a full 360-degree Navcam panorama can be taken on different days (as with the panorama that opened this post), but as long as the drive number doesn't change, you should be able to mosaic them together.

The site number was incremented a couple of times before they ever drove. In theory it is is incremented by the rover team when they decide they're at a new "site." It doesn't happen automatically, but it looks as though they are choosing to increment the site counter whenever they have arrived at a location where they plan to do major arm activity. The rover arrived at site 4 on sol 29, when it drove to the location where it performed the CAP 2 arm checkout. It reached site 5 on sol 57, when it arrived at Rocknest. On sol 166 (January 23) we arrived at site 6, at John Klein.

Note: in the originally-posted version of this blog, I incorrectly stated that the prongs move back and forth. In fact, they are fixed, while the whole bit assembly can be moved. Thanks to Airbag for the correction as well as for the link to this extremely useful reference document (PDF) on the drill.