Curiosity's MAHLI camera: Much more than a microscopic imager

Today's press briefing featured the first image from MAHLI, the Mars Hand Lens Imager, so it's time for me to dive in to this camera's capabilities. The canonical reference on it is Edgett et al. 2012, a scientific paper that's available for free because they paid for open access (well, as Ken Edgett reminded me this morning, ultimately, it was I and the other American taxpayers who paid for open access).

MAHLI has the same detector as MARDI (the descent imager) and the Mastcams (the main science color cameras), but the optics are different. In particular, it has adjustable focus, which none of the other cameras have, permitting it to focus on things as close as 2.1 centimeters away or as far away as it can see. Here's the basic stats:

Pixel size: varies across the field of view and depends on working distance. You can calculate the size of MAHLI pixels using this equation:

It's tempting to think of MAHLI as being analogous to the Microscopic Imager on Spirit and Opportunity, but in truth the two share no similarities except for their location at the end of a robotic arm. Here are some of the things that make MAHLI cool.

Like MARDI and the Mastcams it is a color camera, with a Bayer-pattern filter on its detector. This is similar to personal digital cameras. In fact, it's a Kodak detector (a Kodak KAI-2020CM, if you must know).

It has LED light sources for imaging in shadow and at night, four white-light LEDs and two longwave ultraviolet light LEDs (365 nm).

When it's operated at very short distances from the target, it has a flat depth of field (as any camera would), meaning that if the target is not flat and perpendicular to the camera there will be some parts of the image in focus and some that are not. So it will take stacks, as Opportunity's Microscopic Imager does. But unlike the MI, MAHLI does not have to move to take images at different focal distances; it just adjusts focus. So the geometry remains constant, which helps a lot in merging multiple images to make a single in-focus image. What's more, MAHLI can perform its own processing of stacks of eight different-focus images into a single image that's in focus everywhere before sending it back to Earth. (The images can also be returned individually.)

The adjustable focus means it's not limited to taking closeups; it can take photos of anything it can see, which is anything the robotic arm can point it at. Which is a lot of stuff. It will document the area where samples are being taken by taking nested sets of images from different distances -- from far away to provide context, and increasingly close to provide detail.  It can be used as a periscope, reaching higher elevations than the Mastcams can. (Ken called this "giraffe" mode.) It can shoot photos underneath the rover, or take closeups of the inlet ports for Chemin and SAM. It can (and will) be used to take a rover self-portrait.

Video wasn't a requirement, but because its electronics are the same as those for MARDI and Mastcam, it is capable of acquiring 720p video albeit at a lower frame rate (1.9 fps). I can't imagine a whole lot of uses for this except maybe for watching SAM and Chemin ports operate, but there are probably other uses I'm not thinking of.

It has 8 GB of onboard storage capability, which means that when they compress images to return them to Earth, if they decide they don't like the compression, they can retransmit them later. They can hang on to data for quite a long time, actually.

All in all, it's spectacularly more capable than the Mars Exploration Rover MI, and I expect to be showing lots more MAHLI images than I ever have MI images.

Here's the first image that MAHLI returned from Mars. The image is a bit anticlimactic, because it's taken through a dust cover that got very, very dusty during the landing. It was taken from MAHLI's position on the robotic arm turret where it's currently stowed; from that position it's sort of looking over Curiosity's left shoulder. So the view is almost due north. We see the plains and the crater rim. In the foreground, you can actually make out a fair amount of detail on the rocks; the focus is good. 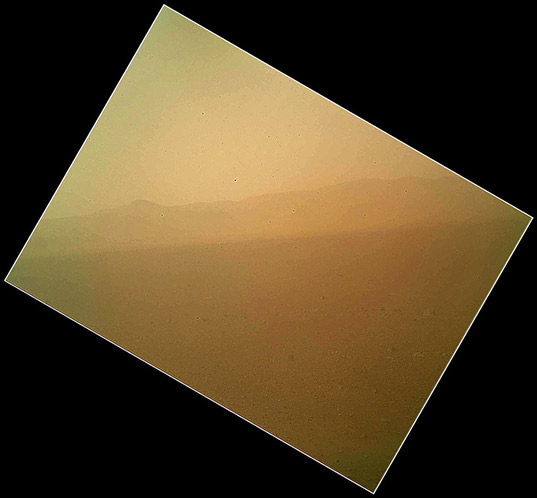 Curiosity's MAHLI (Hand Lens Imager) looks to the north of the rover on the afternoon of sol 1, the first day after landing. In the distance, the image shows the rim of Gale Crater. The image is murky because the MAHLI’s removable dust cover is apparently coated with dust blown onto the camera during the rover’s terminal descent.

The dust cover will stay on MAHLI whenever it's not being used. It's not likely to be opened for weeks. The Curiosity team will complete its first set of instrument checkouts and also install an upgraded version of its operating software before beginning the slow process of commissioning the arm and all of its instruments. They'll take photos of all the instruments on the end of the turret to document their state, so we'll get a very good look at how dusty the dust cover actually is. Only then will they be ready to take that cover off and give MAHLI its first clear look at Mars -- and Curiosity's first self-portraits.

Very dusty indeed, and that picture is after some processing right? Good thing it has a cover, and I am glad to see that its cover at least can be opened and closed - it will probably spend a lot of time close to the ground. However what I am really curious to see is the MAHLI calibration target - I'm not sure whether those color calibration patches will be of much use!

We just discussed this on Dr. Charles Mazel's Facebook page (http://www.facebook.com/pages/NightSea/108294389213469), who is a pioneer in underwater fluorescence, that it might have been better to use blue light (450 nm) instead of UV (365 nm), which might have allowed to find fluorescent fingerprints of traces of organic matter, and hence, traces of life on Mars. Of course assuming and presupposing that life on Mars would share some of the properties of life on Earth. (Dr. Mazel was the first to discover fluorescent organisms in the deep sea, including a shark, see http://oceanexplorer.noaa.gov/explorations/05deepscope/logs/aug22/aug22.html)

How much organic matter would need to be present for it to be obvious from the point of view of MAHLI? The thing is that there is not going to be complex organic compounds of any kind exposed right at Mars' surface because they quickly break down in the absence of a magnetic field; solar radiation breaks them up. Curiosity's hope for detecting organic compounds is to get fresh samples of material buried deeply within rocks, and to run them through its gas chromatograph mass spectrometer.