[EDIT April 25: Thanks to Marc Rayman for correcting the Vesta departure date in my timeline.]

A great many of my "explainer" posts originate with me being annoyed at myself for not remembering something, and here's another example. This morning I've been moving Dawn images of Vesta into our new website's image library, and I've been continually irritated at myself for not being able to remember the names of Vesta's very distinctive-looking craters. So, I made myself a cheat sheet. These are not all of Vesta's named craters; to see a visual guide to all of them, you have to go to the USGS Planetary Nomenclature website and download the latest version of their PDF map of Vesta. These are just some of the biggest or most distinctive ones as shown in the mission's image releases. They're all shown to scale (I wouldn't do it any other way!) and are approximately oriented to have north up. They are kind of geographically arranged, somewhat ordered from north at top to south at bottom and west to east, but don't take the geometric relationships among these images very seriously. For actual geography, check the map. 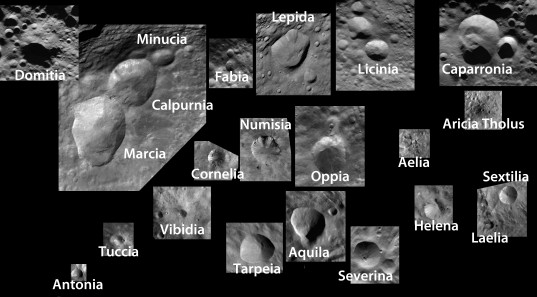 Craters on Vesta: A Cheat Sheet

A non-exhaustive visual catalog of some of Vesta's distinctive-looking craters. They're all shown to scale (100 meters per pixel, at full size) and are approximately oriented to have north up. They are only very loosely geographically arranged, somewhat ordered from north at top to south at bottom and west to east. For actual geography, check this map.

Also, I couldn't find a handy guide that succinctly summarized when each phase of Dawn's mission began, so here's that summary. It includes the 40-day extension of the mission at Vesta that was announced yesterday.