Pretty pictures from Cassini's weekend flybys of Enceladus and Tethys

Cassini flew close by Enceladus on April 14, 2012, in a flyby designed to help the Ion and Neutral Mass Spectrometer to taste the plumes along Baghdad Sulcus, one of the south polar vents. (You can read more about the flyby here.) At closest approach, Cassini was only 74 kilometers above the little moon. As it approached, it took a long sequence of images of the south polar plumes, which I've assembled into an animation:

Cassini took this sequence of photos of Enceladus' south polar plumes as it approached for its super close flyby on 14 April 2012.

While passing through closest approach, Cassini snagged a pair of ultra-close-up images from an altitude of 185 kilometers, one each from wide-angle and narrow-angle cameras. You can see those here and here; I won't process them just yet because they don't look particularly good in their raw JPEG format. The amateurs over at unmannedspaceflight.com have done their best to tease details out of them. For better versions we'll have to wait a bit for the imaging team to release their own versions, or for the data to become available for public use next April 1.

After performing its stunt dive past Enceladus, Cassini enjoyed another relatively close encounter, with Tethys. There's a lot of fairly high-resolution images available at the raw images website; I liked this global color view. You can see how strangely flat the crater Penelope is (near the terminator), and I like the pointy nose of the central peak of crater Melanthius near the bottom. The northern end of Ithaca Chasma -- the set of old, eroded fissures that winds across a huge portion of Tethys' surface -- creeps over the top of the globe. 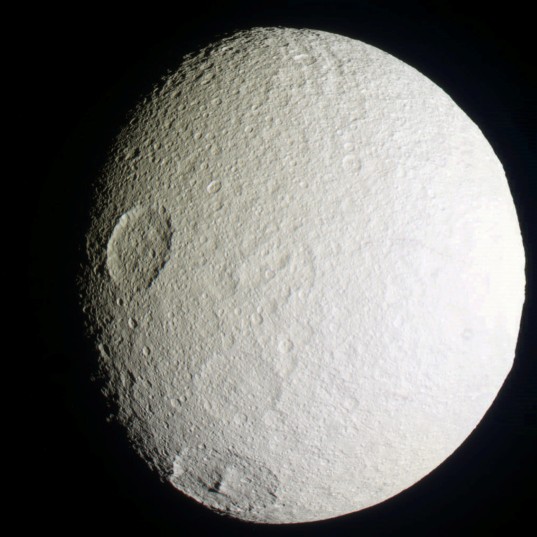 An enhanced-color global view of Tethys from Cassini's 14 April 2012 flyby.