Notes from the Lunar and Planetary Science Conference: A little bit of Phobos and Deimos

I just sat in the "small bodies" session at the Lunar and Planetary Science Conference, listening to three talks about Phobos. The first was by Abby Fraeman, who looked at data on Phobos and Deimos from the two imaging spectrometers in orbit at Mars. Both Mars Reconnaissance Orbiter and Mars Express have these instruments, which are sort of like cameras, except that they split the incoming light into tiny little slices of wavelengths, allowing scientists to explore how the surfaces reflect light at each wavelength. They do this in order to try to figure out the composition of the surface. 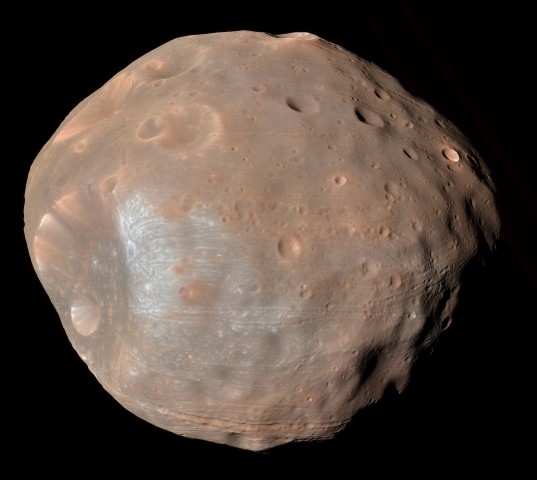 Mars Reconnaissance Orbiter approached to within 6,800 kilometers (4,200 miles) of Phobos to capture this enhanced-color view of the Martian moon on March 23, 2008.

Abby showed that the two spectrometers' measurements were in very close agreement; she also showed that there's no obvious indication of mafic minerals like olivine or pyroxene, which are minerals you'd expect to see if Phobos and Deimos formed as debris from a big impact on Mars. The bluer areas of Phobos look like carbonaceous chondrites. The redder areas of Phobos look very much like the surface of Deimos, but neither of these looks like any known asteroid type. But it looks to me like these spectra are hard to read; they show almost no dips and wiggles indicative of any kind of mineral, except for the tiniest dip at a wavelength of about 600 nanometers, which Abby said could be related to phyllosilicates or even graphite. 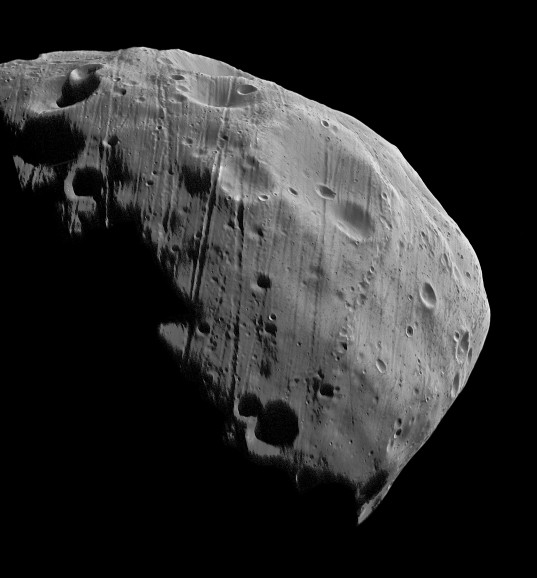 The next talk, by L. Chappaz, was motivated by Phobos-Grunt's mission. It asked: if you grabbed 200 grams of soil from the surface of Phobos, how much of that material would actually have originated on Mars? Through numerous detailed simulations of impacts at various angles and speeds onto Mars, Chappaz concluded that a 200-gram sample would have contained 150 micrograms of Mars.

Then there was a particularly interesting talk that dealt with the question of how Phobos' grooves formed. I've written before about the hypothesis that they are actually crater chains generated when big impacts onto Mars sprayed ejecta outward at high enough velocities that it reaches Phobos' orbit. The speaker, Kenneth Ramsley, was not a geologist, but rather an engineer, who looked at this hypothesis from the point of view of orbital mechanics and spacecraft systems engineering. He listed six main predictions of the hypothesis. The hypothesis states that you start with the ejection of parallel strings of melt that break up into equal-sized droplets that spread out along their orbital trajectory evenly and impact Phobos to form these arrow-straight, parallel chains of craters. Through simulations he showed that, from the standpoint of orbital mechanics, the hypothesis is very, very implausible. It was a pretty convincing analysis. Among other things, the particles would need guidance 1000 times better than that used on cruise missiles in order for them all to strike in an exactly linear chain. This is, I think, the death of what I've always thought was a very pretty idea. But this is science, so one has to let go of hypotheses that don't work out, regardless of how pretty they are.

I'm sorry but the link to enlarge the second picture seems to be looking for a computers hard drive, rather than a webserver.

Thanks for catching that! It's fixed.