Yesterday I was treated to a little tour (little, because it's a little building) of Honeybee Robotics' office here in Pasadena. They were putting on a show for a state visit by the new NASA Chief Technology Officer Mason Peck, and had invited media. (NASA had arranged the visit as an example of a small business involved in supplying technology to NASA.) I was one of only two media who showed up (the other was a photographer from a local newspaper), and I have to say that people who stayed away missed a cool show. There were plenty of people there from JPL to gawk at the toys. Honeybee is developing some great technology for future space missions for Earth, Mars, and beyond.

I put a photo album on Flickr. I had known of Honeybee before because I knew they had designed and built the Rock Abrasion Tools (or RATs) for the Mars Exploration Rovers. Here's one of those, "in the flesh" -- Honeybee president Kiel Davis told me that the hardware here is 90% flight-qualified. 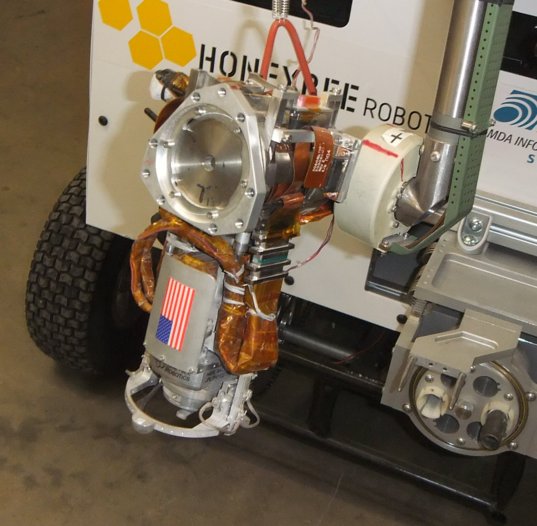 Here's another view, looking up at the business end. Note the red rubber sling and screen-door spring holding it up -- that's not flight hardware, that's a High Tech Earth Gravity Compensator. (My term.) 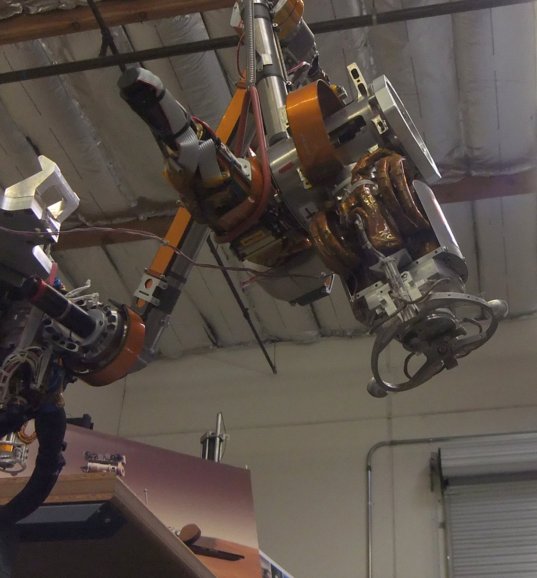 The business end of the Rock Abrasion Tool.

I had a long chat with Kiel where he talked about how amazed he is that the Opportunity team can still use the RAT. Like everything else on Opportunity, it is functioning waaaaaay past its warranty. The drill works okay, but the encoders -- devices that measure and count the number of rotations made by each of the little motors inside the tool -- failed a long time ago. Kiel said that he was involved in writing the original software for the RAT, and it depended entirely on the encoders to determine when the drill rasp had finished a complete orbit, which would trigger a different motor to make a tiny step downward into the rock, grinding away another microscopically thin layer. He said that, without those, they had to completely rewrite the software using thousands of conditional statements within the rover sequencing software (the stuff that Mars Rover Driver Scott Maxwell works with) plus very low-level commands to the RAT to do RAT grinds that basically use educated guesses for when to step downward into the grinds.

Here's a bunch of drill bits they had prototyped for use on a Rock Abrasion Tool for Curiosity, before the design spec changed. Honeybee went on to build the percussive rock drill that's on its way to Mars now. They also designed the drill rasp that flew on Phoenix. So all the rock drilling tools ever sent to Mars came from them!

A series of prototypes for a rock abrasion tool for Mars Science Laboratory, which was never developed (they switched to a percussive drill). The "teeth" are much longer than for MER because the drill would have needed to last much longer.

Moving on to new ideas, here's VP Kris Zacny showing off a huge drill for Mars subsurface sample acquisition. They have field-tested it in Antarctica (working with Chris McKay), and they have tricky ways of delivering samples from different depths below the surface to waiting science instruments. He also talked about how they've worked with SpaceX to figure out how the "Red Dragon" -- a Mars lander based on SpaceX's Dragon capsule -- might take not one, but two of these beasts down to land on Mars. They'd sit inside the capsule, and drill right through Dragon's heat shield to get to Martian soil, delivering the samples back inside the capsule to instruments. 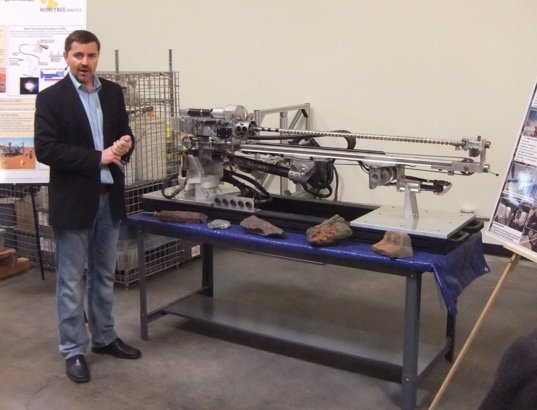 Kris Zacny of Honeybee shows off a really really big rock-boring drill being developed for Mars. A "Red Dragon" could carry two of these, which would drill right through the heat shield to bring samples up from depth into instruments in the interior of the Dragon capsule.

I mentioned tricky sample acquisition techniques. Most of them involve pneumatics -- using puffs of neutral gas to push powdered samples through tubes to instruments. This is a genius idea because it requires no moving parts and provides point-to-point delivery -- none of this dumping soil all over your instrument deck in order to try to get it into funnels, only to have the soil clump and refuse to pass through. And the gas is already there; landers usually carry helium or nitrogen gas supplies for pressurizing their landing thrusters, gas that they vent immediately after landing. In this scenario, they'd hang on to the gas and use it to move samples around. 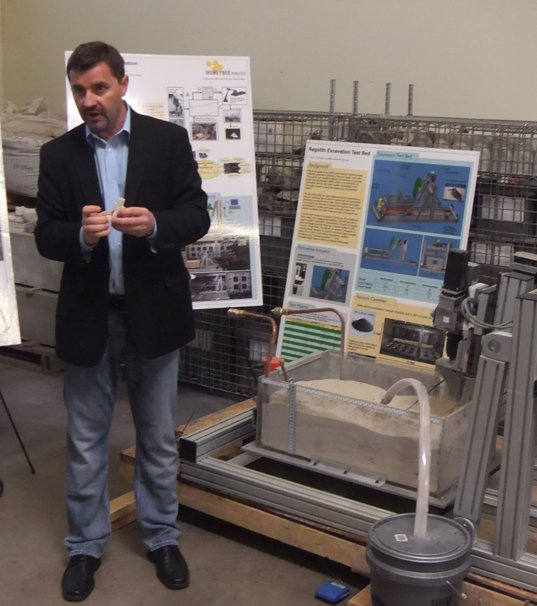 No, really, it's a space Hoover

Zacny explains the pneumatic sample acquisition systems they are developing -- no moving parts, and sample delivery straight into an instrument. The sampling tool looks very much like a mini car vacuum head -- which is basically what it's for.

They also showed off all kinds of extremely tricky designs for rock-coring and soil-sampling bits for Mars Sample Return -- bits that can automatically sieve samples into two different-grain-size fractions, or that can open to allow you to inspect the sample before caching it. 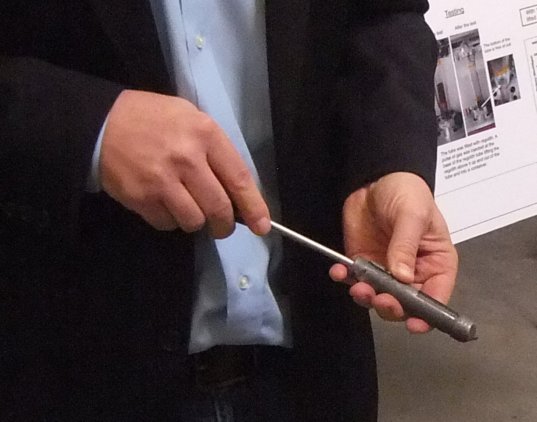 There was much more of this, including a self-contained cable-lowered drill-coring system for Europa (the motor and everything for the drill is inside the drill string itself, and it can drill as far down as you can reach with a reel of cable), plus all kinds of commercial applications for the technology, most of them to do with mining and military uses. For instance, they had a mining drill equipped with a laser-induced breakdown spectroscopy system that could check the composition of rocks all the way down a borehole -- no need for the time-consuming process of gathering samples and returning them to a lab for analysis -- to allow in-situ decisions about which rock is the most economically valuable to mine.

Finally, Kiel showed off some neat microsatellite technology they're developing. One is a solar array drive assembly for CubeSats that's thinner than an iPhone -- it can mount as a cap on the end of a CubeSat bus and rotate solar arrays to deliver maximum power to the bus. The other are miniature control moment gyroscopes, super-high-speed gimbaled tungsten reaction wheels that allow rapid turn rates, turning a microsatellite in low-Earth orbit into a point-and-shoot camera (Kiel mentioned applications like coral reef monitoring), or permitting extremely precise maneuvers for in-orbit docking, satellite repair, or operations close to asteroids. He said that the angular rotation rates they can achieve with these are a factor of 10 faster than for traditional reaction wheels -- rotation rates measured in degrees per second rather than tenths of a degree per second. And they're eensy. Peck seemed very impressed by these; I guess the Control Moment Gyroscopes most people are familiar with are car-sized ones used on the Space Station to rotate the solar panels. 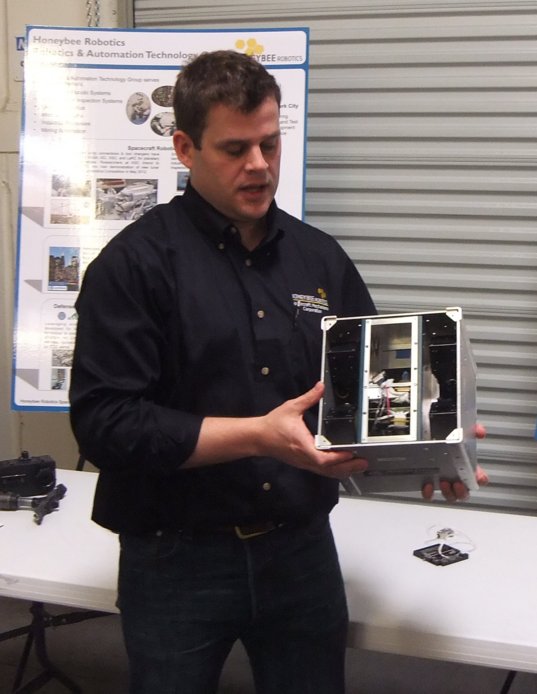 Honeybee's Kiel Davis shows off their new Control Moment Gyroscopes for microsatellites. Behind him is a CubeSat solar array drive assembly (SADA). 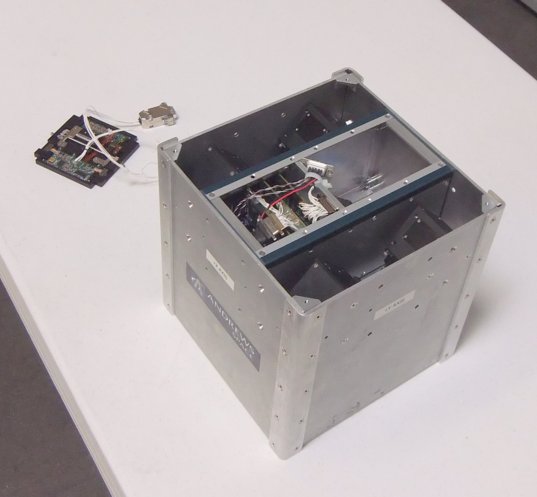 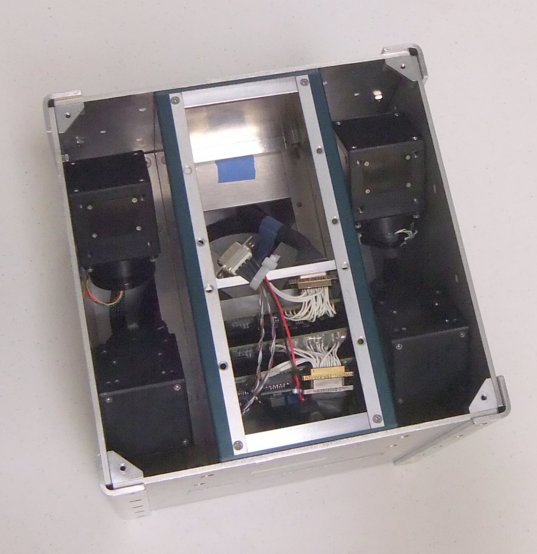 One more view inside the microsatellite

All the toys are cool but what really impressed me is how many of the technologies that were developed first for space science missions have turned out to have commercially viable applications back here on Earth. Their sample drilling, acquisition, and delivery systems had obvious and valuable uses for the military and mining -- mining especially stands to save a lot of time (and, therefore, money) with their autonomous in-situ sample acquisition and analysis tools. And the microsatellite technology -- just by making smaller satellites be able to do more things with more power, that puts satellite applications into the reach of smaller companies (and countries) by shrinking launch costs along with the size of the spacecraft.

It was a fun visit all the way around! I thank Honeybee for the invitation.