It is always thrilling to see relics of human exploration out there on other worlds. Today, the Lunar Reconnaissance Orbiter Camera team posted some new photos of two defunct spacecraft: the Luna 17 lander and the Lunokhod 1 rover. I've posted images of the two craft before, but the ones released today are much better. It's still a bit hard to make out the shape of the rover, but you can very clearly see the ramps from Luna 17 down which the rover debarked, and the characteristic parallel tracks and donuts made by a multi-wheeled rover roving and turning in place.

Unfortunately, I don't currently have a version of this image without the annotation.  I did download the relevant LROC image, all 500 MB of it, but I have so far been unable to find a way to open and process full-resolution LROC images in all their 16-bit glory.  I'm working on it!

Here are a couple of zooms onto the lander and rover: 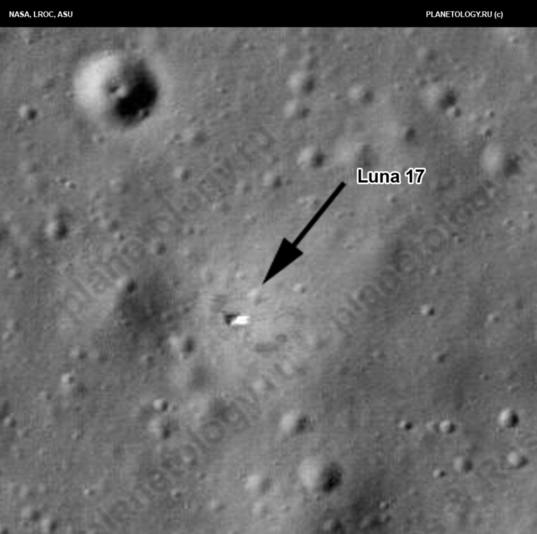 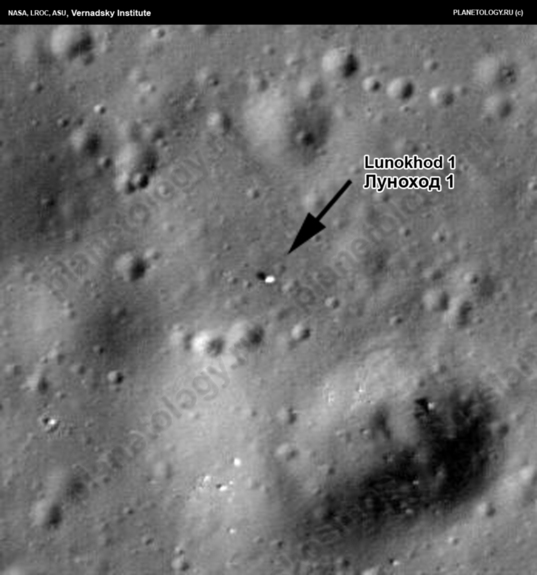 Lunokhod 1 on the Moon

Lunokhod 1 sits on the Moon in this photo taken by Lunar Reconnaissance Orbiter on November 30, 2009. Lunokhod 1 is a bright spot with a prominent shadow cast by its open cap. Its approximate coordinates are 38.32507 N, 324.9949

Thinking about the Lunokhods and their incredible missions, I'm filled with admiration for what the Russians accomplished with these awesome remotely operated vehicles. They may not ever have achieved human landings on the Moon, but Lunokhod 2 drove 37 kilometers across the lunar surface in 1973. That's pretty amazing.