Pretty picture: A study in ringlight

Gordan Ugarkovic's Flickr page is worth following, because every time he digs into the Cassini data archives he comes up with gems like this one. 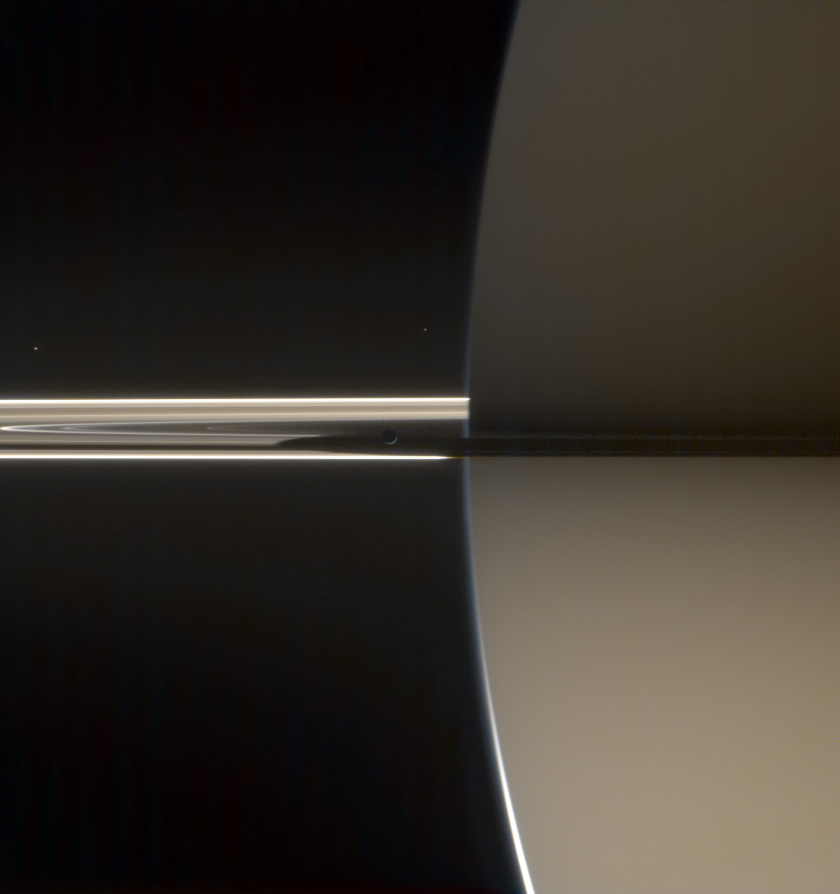 A study in ringlight

Cassini took this photo on 7 June 2006. Mimas is silhouetted against the rings. The planet is lit by reflected and scattered ringlight. Two stars are above the rings in the background.

Clearly, this is Saturn, and its rings, and if you look closer you can see a tiny circle, on top of the rings, which is Mimas, and two stars in the background. It should look weird to you that while the rings are bright, Mimas is a black dot. What is happening here?

Nearly everything in this picture is lit by light that has not arrived directly from the Sun. Look at Mimas and you can see how skinny a crescent it is; the Sun is almost in front of Cassini, below and a little to the right.

We can see Saturn's globe because it is receiving light that has been scattered or reflected by the rings. The night side of the southern hemisphere is receiving light reflected off of the south face of the rings, which would appear as a glowing beige arc across Saturn's night sky. However, Cassini's perspective is from just north of the ring plane. The bright appearance of the rings is due to their transparency and the fact that they're made of countless particles, many of them no bigger than dust. These particles scatter the sunlight, making the sparsest parts of the rings appear very bright when seen from their unlit side. The very brightest, outer edges of the rings are the F ring.

At the bottom edge of Saturn's disk, it, too, appears bright. I don't believe that this is direct sunlight either. I think it's light that has scattered through the transparent uppermost layers of Saturn's atmosphere to its night side -- that is, it's Saturn twilight.

What I wouldn't give to be a passenger on Cassini and get to take in its grand views all the time...