I attended an event in Los Angeles last weekend, called LeetUp, that billed itself as a "carnival of nerdly delights." It was, in part, a reconnaissance mission, to satisfy a nagging curiosity of mine. It's my impression that while most fans of real space exploration are nerds, the converse is not necessarily true. I'm trying to figure out (a) if I'm correct that most nerds aren't that into real space exploration and (b) if it is correct, why. So here's a report on my nerd reconnaissance mission! Just a heads up to my regular readers: this blog post has only tangentially to do with space exploration.

First of all, what was LeetUp? Fortunately, they have a FAQ page that answers that question: "It's a nerd party & variety show. On stage, there will be podcasting, concert performances and conversation. Around the venue, there will be lots of fun activities designed just for leetUP, like exclusive technology demos, a videogame arcade, and other surprises."

First, I was curious about what sort of people would attend such an event. I was interested, of course, because, after all, I am a nerd, so these should be my people. My regular readers know I have nerd cred, but just to establish it briefly: I spent much of my free time in high school creating and drawing my own Transformers characters and writing fan fiction about them. More recently, for about a week I was coming to work very groggy and had to explain to my boss that I was groggy because I'd stayed up too late playing Skyrim. My boss said: "OMG you are such a nerd." My boss is Bill Nye the Science Guy. When Bill Nye the Science Guy says "you are such a nerd," believe me, you are a nerd.

Demographically, the attendees appeared to range in age from 20s to 40s and were overwhelmingly white. There were more women than I expected to see -- definitely more than a quarter, probably more than a third of the attendees. Many were dressed, like me, in geeky T-shirts and jeans. There were a lot of people, many hundreds, maybe as many as a thousand. These were, indeed, my people, and there were a lot of them. (The question of why they are overwhelmingly white is an important one, but not one that I'll deal with in this post; I have no data on which to base any insight. Although it probably has to do with onstage personalities being overwhelmingly white.) 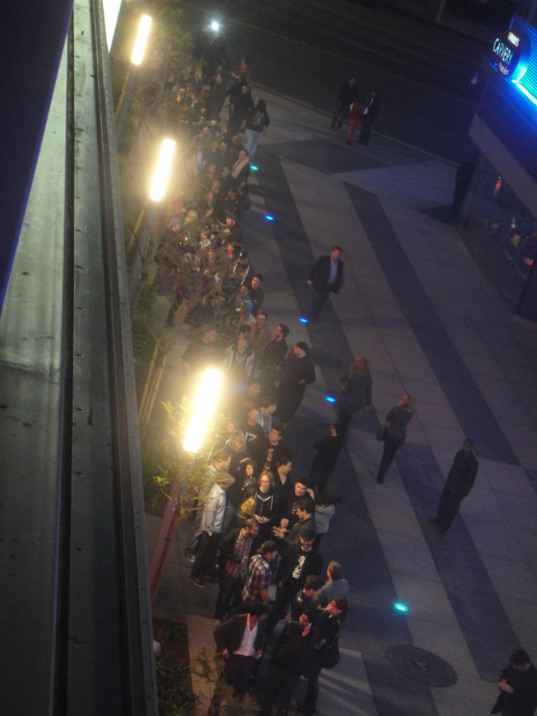 I'd paid for "VIP" tickets, which bought me and my fellow nerd Loren Roberts entrance into an upstairs lounge, a swag bag (that mostly contained Magic cards) and a nice balcony seat from which I could view the stage. It also got me a chance to meet some of the nerd celebs being featured that evening, including host Kevin Pereira and guests Kevin Smith, Felicia Day, Chris Hardwick, Greg Fitzsimmons, and Doug Benson. (Also on the program were such Internet sensations as Epic Meal Time and Ask a Ninja.) Of these, the only one I really knew anything about going into the show was Felicia Day, so I got in the line to shake her hand, drop Phil Plait's name, and mention my curiosity about nerds and real space exploration. She mentioned to me that she'd narrated something for NASA a couple of years ago. (Check it out; it was for the Spitzer mission, about galaxy collisions, and is pretty funny. I especially like Flunky #2's green-screen gun and Sean Astin's voice on the old-school cassette player.) 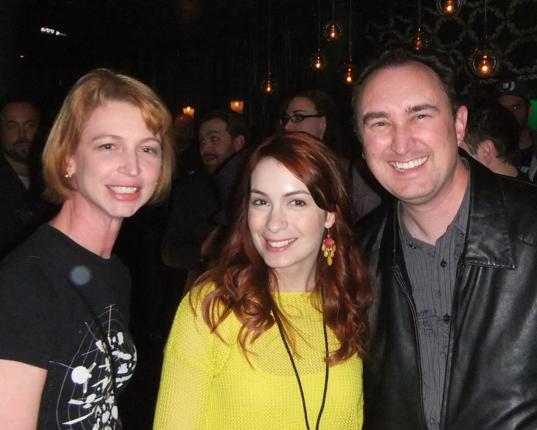 Then the show started. There was a standup routine by Pereira, followed by the first of two panels, which featured Day along with Alex Albrecht (director of this incredibly awesome live-action Voltron short) and Harley Morenstein, of Epic Meal Time (an Internet "cooking show" prominently featuring lots of bacon and Jack Daniel's). Loren and I tried to figure out what the common thread was that linked these and all the rest of the night's personalities, and it pretty much came down to people who create popular Internet content. They discussed crazy Internet comments. My favorite moment from that panel was when Day explained why she thought it was valuable to converse directly with her fans, telling a story about one Brazilian fan she has communicated with, who Day thinks is single-handedly responsible for the popularity of her most recent project, The Guild, in Brazil. A live performance of Epic Meal Time followed, which was gross, but I enjoyed his "Bacon Bucket" and device of tossing bacon to the audience at slow moments, to great audience enjoyment. 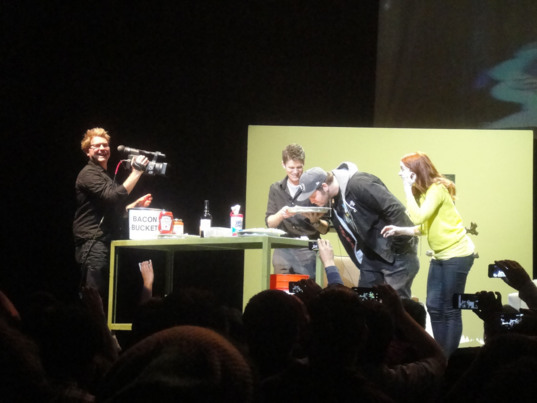 Then came a performance by DJ Mike Relm, which was, for me, the highlight of the evening. For close to an hour he remixed both music and video, old and new, from movies and YouTube, into a thumping, mesmerizing performance piece, taking the pop culture references that the whole room shared and mixing and scratching them into something completely new. I had a hard time finding a YouTube video that really conveyed his genius -- you have to be able to see the high-quality video, feel the thumping bass, and watch him perform, and no one video I found managed to show all of that. Here's the best I could find. This remix of Aziz Ansari is pretty awesome too, but you don't see Relm at the turntables. I've sent him an email to see if he's ever remixed any space video.

Relm was followed by Ask a Ninja, who did his funny shtick. But one of his jokes made me go "hmmm" -- while musing on what "leet" means, he mentioned how the audience in front of him were "elite," in the sense that they were a privileged elite -- but they were not the kind who actually solve real-world problems, but instead "create artsy worlds to live in." (And yes, I can quote because I was taking notes. I told you I was doing reconnaissance.) It may have been intended as a joke, but it was spot-on. And it got me to thinking about whether I really should expect this nerd community to be interested in real space. The things that the crowd had in common were interests in escapist fantasy and science fiction, humor (often in the form of either snark or absurdity), and nostalgia for the cartoons and 8-bit games of our youth, none of which betrays any interest in anything real. On the other hand, I realized I might be overthinking this; after all, this was supposed to be a party. It was supposed to be a fun escape from reality. But it was a party with panel discussions, which may be what was throwing me off.

Anyway, speaking of panels, the triumphal panel featured Pereira with actor/director/writer Kevin Smith (known for films like Clerks and Dogma), nerd comedian Chris Hardwick (of Nerdist), comedian Doug Benson, and comedian Greg Fitzsimmons. My first thought when the panel was assembled was, "hmm, a panel of five white men." And I learned that a panel full of comedians can be much less funny than the same number of individual comedians. For about 45 minutes they talked about a topic that I can't actually mention here, but let's just say it was pretty much the same as the conversations I heard every day when I was in eighth grade and my best friends were the creative loser boys in my class, except that back then the boys didn't have the Internet to inflame their, um, imaginations. I didn't find it offensive (except for one regrettable "joke" about rape; but I do expect to be mildly offended by comedians, who are often pushing the edge of what's acceptable). It was totally harmless but also just really, really boring. And Doug Benson's gratuitous mistreatment of a live fish in a bowl that was part of the set decoration was driving me nuts. The audience started trickling out, and I couldn't help but notice that the ones leaving early were, mostly, women. The only noteworthy discussion on the panel came from Smith, who did manage to talk for a couple of minutes about how entertainment used to be experienced passively -- someone else created it, and you watched it -- but now, because of the Internet and the powerful tools we have at our disposal, everyone can create, and may find that other people like what you create. And at the very end, When Pereira asked the panelists if there was anything else they wanted to promote, and most of them advertised their own stuff, it was only Fitzsimmons (who, he had established, was the least "nerd-identified" of the men on the panel) who mentioned a social cause, asking the audience to donate money to Save Darfur to help reduce the suffering there. It was a jarring moment of seriousness, snapping me back to the real world.

I left when the panel ended. What did I learn? I learned that indeed these "nerds" are my people, in that I got nearly all of what must have been hundreds of pop-culture references made throughout the evening, and thoroughly enjoyed most of the show. But I also learned that nerds may not be as inclusive as they think they are, and that it's hazardous to stage a discussion panel that's insufficiently diverse. And I don't think I learned anything about whether I can succeed in my goal of raising interest in real space exploration among my people. More research is necessary!