When I was a graduate student (lo these many years ago), one of my procrastinatory mechanisms was to thumb through cabinets of large prints of Magellan images of Venus. They're so beautiful, each one seemingly a work of abstract art.

Here's a bit of Venus taken almost at random (I picked the genera l area at random, but framed the selection as I zoomed in). It contains four of Venus' 900 impact craters, each with a slightly different morphology. 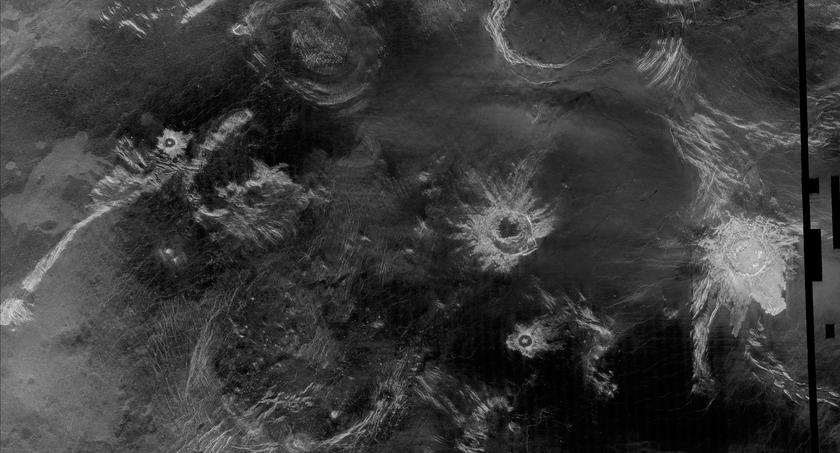 An area of Venus about 1800 kilometers across contains impact craters of different sizes and a variety of Venus' landforms.

Impact cratering on Venus is very different from all the other terrestrial worlds. Venus has a very thick atmosphere, which protects it against impactors of much larger diameter than Earth's. Our puny atmosphere shields us from asteroids only 25 meters across and smaller; Venus' protects it asteroids smaller than 1000 meters across. And even asteroids larger than these are slowed and fragmented by their passage through the atmosphere before they hit the ground. Once the asteroid makes its smash, the atmosphere has another crucial effect: it's so thick that the ejecta (the stuff excavated out of the ground and thrown out of the impact crater by the impact) doesn't get very far. I imagine the ejecta starting out quickly and then billowing around and back onto itself, settling to the ground in a confined splat very close to the crater.

The leftmost crater is the 29-kilometer-diameter Kollwitz, a central-peak crater whose splat of ejecta barely extends one crater diameter away from it. (Links will take you to Robbie Herrick's Venus Impact Crater Database.) At the bottom center is another crater similar to Kollwitz, the 33-kilometer Callirhoe. But this one is worth a much closer look. The ejecta to the west looks similar to Kollwitz', but to the east it breaks up into really stunning braided channels that run quite a distance along the ground. I wonder if there's a regional slope to the east here, and the turbulent ejecta current ran downhill.

Immediately north of Callirhoe is the 97-kilometer Maria Celeste. This one is much larger, so instead of a central peak it has a peak ring. Peak ring craters are found on the Moon and Mercury as well, but they form at smaller diameters on Venus because of Venus' higher gravity. It, too, shows this braided runout of ejecta, with most of the channels splaying to the north of the crater. The ejecta on the other sides forms rays which break up with distance from the crater -- I am tempted to think these are enormous boulders (which would be able to travel much farther than smaller dust in Venus' thick atmosphere), but can't say for sure that that's what we're seeing. On the southeast side, there are no ejecta rays. That's a telltale sign of an oblique impact; the impactor arrived from that direction.

Finally, at far right, is the 92-kilometer Greenaway. Even though it's the same size as Callirhoe, and shows a similar peak-ring structure, it looks very different. For one thing, its floor is bright, not dark. These are radar images, so dark means smooth and bright means rough. I don't know what could make Greenaway have a rougher floor than Maria Celeste. Zoom in on Greenaway and you can see that its ejecta has quite a different character from the others, too. Bright (rough) material seems to have flowed out of the crater, spilling to the south and especially southeast. It's clearly a liquid-like flow; you can tell from the fan-shaped flow lobes. It's possible that these flows are related to the impact crater, but it's equally likely that they're not. Volcanism is widespread all over Venus and it's quite possible that some volcanic activity began at the site of an older crater, filled up its floor with lava flows, and spilled out its degraded rim.

I invite you to explore the rest of the image; you'll see lots of other things than craters. Have fun!

It was great to learn a little bit more about the planet Venus! thank you for such an interesting blog.