The event that will probably generate the most planetary news in March is the 43rd annual Lunar and Planetary Science Conference (Twitter hashtag: #LPSC43), which will take place from March 19-23 in Houston, Texas. Geologists who study solid surfaces from planets to space dust and from Mercury to Saturn will be presenting updates on their latest work with data from spacecraft and laboratory. I was forced to skip it last year, so I'm very excited to be able to attend the whole thing this year! As always, I will be wishing I could clone myself to attend more sessions, and would be very happy for volunteers who would be willing to share their notes with me, or even to write a guest blog entry or two.

Turning to the activities of robots across our solar system, this month will see GRAIL begin its science mission measuring the Moon's gravity field. MESSENGER will complete its primary mission at Mercury, celebrating its one-Earth-year-in-orbit anniversary with a big data release, and immediately begin work on its one-year extended mission. Mars will pass its solstice, ushering in warmer days for Opportunity. Coincidentally, this month will see Jupiter's southern winter solstice, too, though there are no spacecraft there to notice it. Out at Saturn, Cassini will have two encounters with Enceladus this month, one of them distant, one of them at 74 kilometers altitude. Here's Olaf Frohn's diagram of where all our wandering spacecraft are as of Wednesday. Compare it to last month's to see how things have moved. 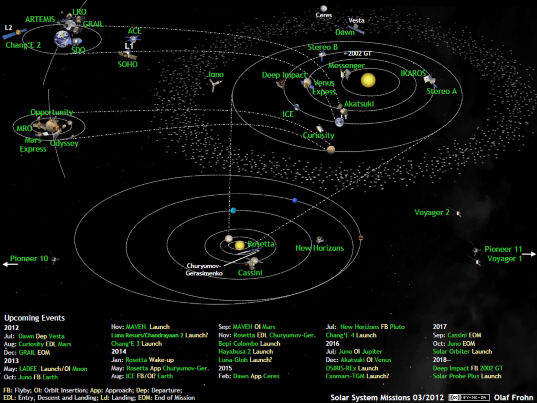 This month, NASA's MESSENGER Mercury orbiter will celebrate its first Earth year in orbit at Mercury -- but it's already been four Mercury years. Thanks to a mission extension, though, it just marks the halfway point of the orbital mission. I'll be watching the Planetary Data System for their next formal data release, which will happen on March 8, and include all data acquired through September 18, 2011. Watch their gallery for regular image releases. I really like this particularly colorful image of Firdousi crater.

ESA's Venus Express remains in orbit on a mission that has been extended through 2014. A recent news release discusses a puzzling slowing in Venus' rotation rate since Magellan measured it in the late 1980s.

This month, Ebb and Flow, the twin spacecraft of NASA's GRAIL mission, will begin their science mission, mapping the Moon's gravity.

NASA's ARTEMISspacecraft are presumably still orbiting the Moon, but there's no recent mission status information available. They were sent into lunar orbit in 2011 to study the Moon's magnetic field, and should last for at least seven years.

Out at Mars, it's late autumn in the southern hemisphere. (It's currently Ls 76.3.) Opportunity sol 2878 is drawing to a close. The mission has to be cautious with power, maintaining a 15-degree northward tilt to its panels through the Martian winter. At last report, the rover was only producing 277 watt-hours from its solar panels, a pretty low number. But we're past Mars' aphelion now, and the winter solstice is on March 30, so we're almost over the hump; days will veeeerry slowly start getting sunnier and warmer from now through the rest of this Earth year. Here is Eduardo Tesheiner's latest route map and Google Earth kml file for Opportunity (two months old now).

ESA's Mars Express is carrying on with an extended mission, planned to run through 2014. In 2011, a serious problem developed with a solid-state memory device that caused it to enter safe mode repeatedly in August and September. Last month, all of the science instruments were back online, and this month the Mars Express Blog reports that "Work is also in hand to resume operation of the Visual Monitoring Camera." So, while there have still been no Mars Webcam images since October of 2011, hopefully they'll come back soon. (It would be cool if they could get it running again before solstice.)

NASA's Mars Reconnaissance Orbiter is keeping an eye on Mars' weather with MARCI. As is usual for this time of year, near northern summer solstice, the atmosphere is stuffed with water from the endlessly illuminated northern polar cap, so there are clouds everywhere. As always, check in on the latest captioned image releases from HiRISE for your dose of spectacular photos, and make sure you follow the links at least as far as the browse versions of the images, because the thumbnails that are automatically posted with their voluminous image releases routinely fail to convey the awesomeness hidden in each photo. Enlarge this one, showing eroded layered rocks within Candor Chasma. So cool.

NASA's Mars Odyssey is now the longest-lived spacecraft ever to operate at Mars. You can see the latest from its THEMIS instrument here. One image from Candor Chasma deserves another; here's one of a landslide that has made a mitten-shaped deposit at the bottom of the crater wall.

NASA's Dawn spacecraft is still in Low Altitude Mapping Orbit, averaging 210 kilometers' elevation. According to the recent Mission Status Reports, the spacecraft is now in a fairly repetitive phase of the mission, gathering neutron data and gamma-ray data, doing routine radio tracking, and performing high-resolution imaging and spectroscopy. Keep watching their daily image releases; here's one that was acquired during the Low Altitude Mapping Orbit phase, showing craters upon craters upon craters. Also, last month, I wrote about Dawn releasing their data to the public; the site has since been taken down, and I haven't had a reply to my email asking why (and also asking what I should do with the gigabytes of data I downloaded). According to the PDS, the official release date is March 1; maybe somebody just jumped the gun on publicizing it. I'll check again on March 1 to see if the site has been put back online before posting more images. Once the Low-Altitude Mapping Orbit phase is complete, Dawn will raise its orbit to a second High-Altitude Mapping Orbit phase. By summer, Dawn will be able to see the north polar areas of Vesta that were in winter darkness during the previous mapping cycle. And in July, Dawn will depart Vesta for Ceres, which it will reach in early 2015. Here's a timeline summarizing the Vesta phase of the Dawn mission.

The NASA-ESA-ASI Cassini spacecraft is now wrapping up its Rev 161; Rev 162 begins on March 1, so there's no very detailed information available from the Looking Ahead site on what Cassini will be doing this month. There is a pretty close nontargeted flyby of Enceladus on March 9, and lots of nontargeted, distant encounters with other moons, but I don't know which ones they'll take advantage of for imaging. On March 27, though, there will be a 74-kilometer flyby of Enceladus, a trick that Cassini will repeat on April 14 and May 2. These will be Cassini's last targeted flybys of moons other than Titan until March 2013, as Cassini's orbit will be dropping away from the ring plane after the May 2 encounter. To see what Cassini's doing when, check out my long and detailed page on Cassini's tour of the Saturn system, and look to the Looking Ahead page for more detailed information.

NASA's New Horizons has 9.87 AU to go to reach Pluto. There are 1233 days left until Pluto closest approach. It's a quiet time on the mission, so they've turned their attention to advertising their petition for the U.S. Postal Service to make a New Horizons stamp. New Horizons is on course for a January to July 2015 encounter with the Pluto and Charon system.

Juno spacecraft is outbound from the Sun. Informal status updates get posted to its Twitter feed. It's still outbound, heading way beyond Mars' orbit before heading sunward again. An Earth flyby in August 2013 will send it on to a July 2016 Jupiter arrival.

NASA's Curiosity, or Mars Science Laboratory rover, is now 80 million kilometers from Mars. Last month, they managed to solve an annoying computer reset issue on the spacecraft. Curiosity will be landing in Gale crater on August 6, 2012, just after 5:00 UTC (August 5, after 10:00 p.m. here in Los Angeles). On Mars, it will be in the midafternoon of a late winter day in the southern hemisphere at the landing site at 4.49°S, 137.42°E. Its nominal mission will last one year but it should go on much longer.

JAXA's IKAROS is now hibernating. It has nearly exhausted its maneuvering fuel, so can no longer maintain a minimum solar incidence angle on its solar cells, reducing available power. It's also near its apoapsis (it'll reach apoapsis this month). As a result of both factors, it has probably entered hibernation mode. JAXA will attempt to resume communications with IKAROS after the spacecraft's orbit has taken it close enough to the Sun to make it power-positive. It was last heard from on December 24, 2011.