Pretty picture: A sunset postcard and a special shadow from Opportunity

The individual frames for this image were taken and downlinked a few weeks ago, but it took Don Davis many hours of meticulous labor to assemble it into this beautiful postcard from Mars. Take a moment to be the rover, standing there, covered with fine red dust, on a cold day in Martian winter, the yellow Sun taking its light with it as it sinks behind you. 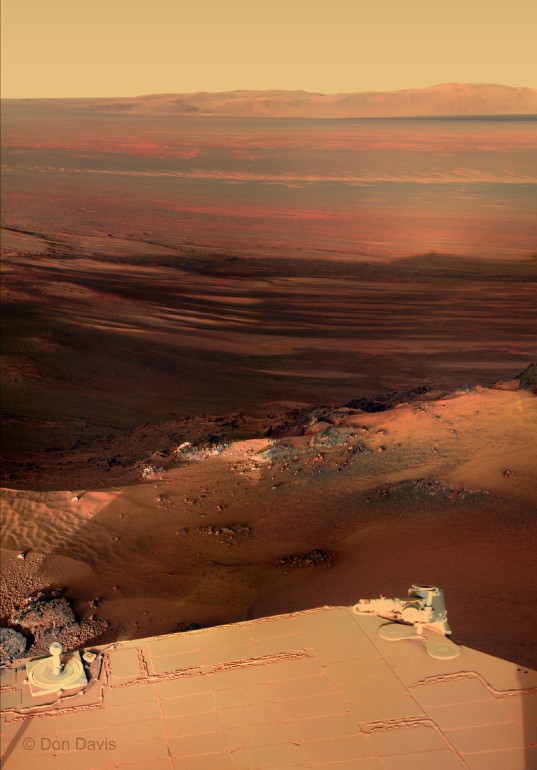 Near sunset on sol 2847 (January 27, 2012), Opportunity gazed backward to the east-southeast and the distant line of peaks that mark the far rim of Endeavour crater. The setting Sun throws very long shadows from the very low-standing ridge that Opportunity, is in turn, standing on. In fact, Opportunity's own shadow is visible, a blurry speck standing on the ridge's shadow.

Please note that this image is copyrighted. Do not reproduce it without contacting the artist.

An area of Endeavour's floor immediately around Opportunity's shadow appears slightly brighter than the floor elsewhere, possibly because of the opposition effect, where specks of dust on the floor of the crater, seen with the Sun directly behind Opportunity's cameras, hide their own shadows from view. (This effect was first pointed out by fredk on unmannedspaceflight.com.)

Don Davis had the following to say about assembling the postcard: "The preliminary jpeg images were difficult to match due to lighting and shadow changes between exposures. I leveled and cropped and freely distorted the original mosaic, and editorially approximated the actual colors of the dusty sundial rather than using the odd colors the actual filter set uses, which is optimized for getting the subtle color differences across the scene.