I post lots of pictures made by space enthusiasts, and they're usually photos of pretty places. This one is quite different. I'm not sure what led Daniel Macháček to create this infographic, but it's dense with information and interesting to examine. 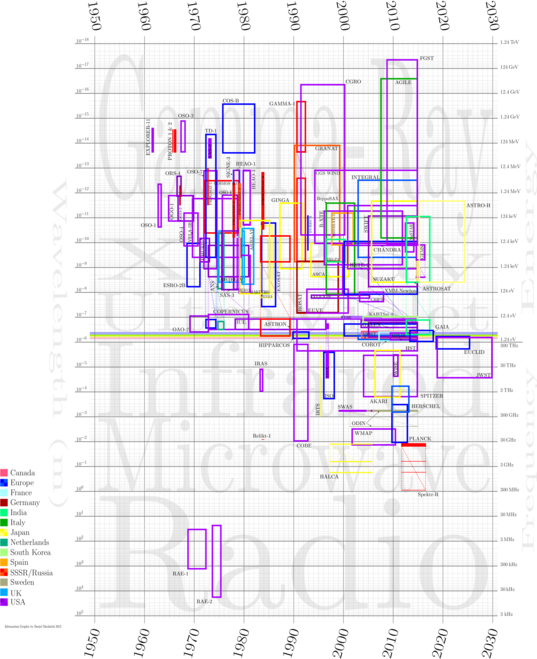 Earth's eyes on the universe's colors, through time

What is this graphic? It is an answer to the question: in what "colors" of electromagnetic radiation have we been able to observe our universe, over the length of the space age? It includes all space observatories that operated for more than one month and were not interplanetary probes or Sun observing missions. (The first requirement filters out all the experiments performed from the Shuttle and probably most from the Space Station.)

The horizontal axis is time, from 1950 to 2030. The vertical axis is wavelength, on a logarithmic scale, from short (gamma) at the top to long (radio) at the bottom. There is one (or, sometimes, more than one) box for each space observatory, where the width of the box shows you the length of time that the mission operated, and the vertical span of the box shows you what wavelengths the mission's instruments were (or are) sensitive to. Color indicates the nation of the mission's origin.

What does it mean? The first thing that is obvious from the graph is the expansion, with time, of the wavelengths that we can access from space. The second, which kind of surprised me, is that there are many astronomy missions from nations and agencies other than the big ones (NASA, USSR/Russia, ESA, and JAXA). In fact, there are lots more astronomy missions that I ever knew existed.

What do you take away from this infographic? Recognizing, of course, that this is just one person's work, and that some subjective judgment calls had to be made, especially as regards the nation of origin of these missions -- Daniel comments that it's increasingly common for all demanding space missions to result from international cooperation; it's an exception, rather than the rule, when an observatory originates in only one country. Daniel is also puzzling at how to add other dimensions of information, including spectral and spatial resolution. Infographics are hazardous that way -- there's always more detail, more information that you can add!