Has Mars Express MARSIS data proved that Mars once had a northern ocean?

There's been a bit of buzz on the Web this week regarding an ESA press release titled "ESA's Mars Express radar gives strong evidence for former Mars ocean." I don't ordinarily write about press-released science papers, but am making an exception for this one because no one has really explained the science behind the Mars-ocean conclusion, probably because everybody is scared to utter the words "dielectric constant." Boo! Are you scared?

The press release is based upon a paper recently published in Geophysical Research Letters: "Dielectric map of the Martian northern hemisphere and the nature of plain filling materials," by Jérémie Mouginot and four coauthors. Geophysical Research Letters articles are very short, but that doesn't mean they lack substance. This particular paper depends upon data gathered throughout the entire eight years that Mars Express has been orbiting Mars using an instrument called MARSIS (Mars Advanced Radar for Subsurface Ionosphere Sounding). MARSIS uses a pair of 20-meter-long antennae to transmit a radio signal at the ground and listen for its echo. A third antenna perpendicular to the main ones helps to remove surface clutter from the received signals. 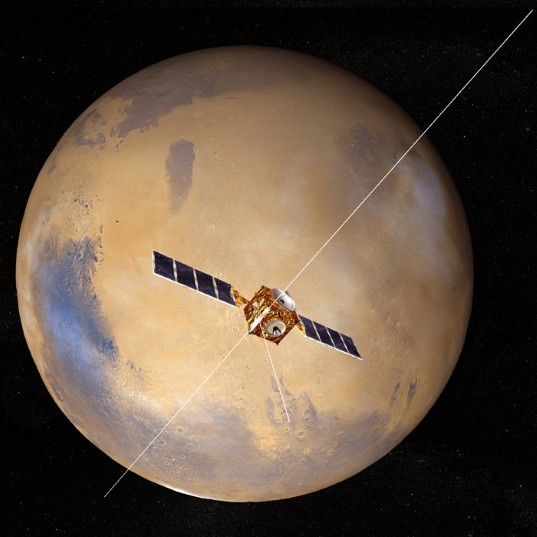 Long antennae mean long radio waves, which can (and do) penetrate deeply into the surface before reflecting back upward. How far the radio waves penetrate depend upon the material that makes up the Martian ground. If it's solid rock, they can reach depths of up to several hundred meters. If it's ice-rich material like the polar caps, they can reach many times that depth, as far as four thousand meters down. Compare this to cameras, which only sense the top (at most) millimeter of the surface!

For subsurface sounding, MARSIS needs to be within 800 kilometers of Mars' surface. But Mars Express has a highly eccentric orbit ranging from 350 kilometers to more than 10,000 kilometers above Mars' surface, so MARSIS can only gather its narrow strip of data for at most 100 degrees of arc on each Mars orbit. Also, MARSIS' subsurface sounding works best at night, when the Sun isn't pumping up the radio activity in Mars' ionosphere. Thus the opportunity to gather sounding data over Mars' poles can only happen when Mars Express' periapsis (closest approach) is near the winter pole. That was the situation last summer, when Mars Express suffered its serious memory problem, so that's why MARSIS was the first instrument that they turned on once they had developed a solution to the problem -- spring was coming to the north pole, and with its arrival, the MARSIS team were losing their ability to see underground. The paper includes the very latest data from that north polar winter subsurface sounding campaign; it was submitted to Geophysical Research Letters in November, just as the campaign ended.

In the past, I've presented MARSIS results in the form of subsurface profiles like this one:

The upper image of this composite is a 'radargram' from the Mars Advanced Radar for Subsurface and Ionospheric Sounding (MARSIS) on board ESA's Mars Express. It shows data from the subsurface of Mars in the water-ice-rich layered deposits that surround the south pole of the planet. The lower image shows the position of the ground track of the spacecraft (indicated by a white line) on a topographic map of the area based on data from the MOLA laser altimeter on board NASA's Mars Global Surveyor. The images are 1250 kilometers wide. 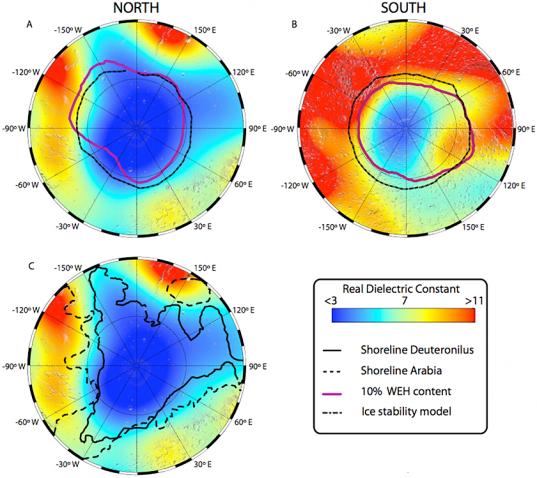 Maps of the Martian northern (A, C) and southern (B) hemisphere, from 30° north and south latitude to the pole, displayed in polar stereographic projection.

So Mouginot and his coauthors look at these maps and assume that the northern hemisphere's low dielectric constant is related to the composition and nature of the rocks. They hypothesize that the particular value of the dielectric constants that they have measured are because the northern hemisphere lowlands contain vast deposits of sedimentary materials with or without ice, while the southern highlands don't. Which makes a pretty story, but they haven't proven anything yet.

Fortunately, their work didn't end there. Let's begin by looking at the southern hemisphere, which is fairly straightforward to interpret. And then let's continue by asking where we know there is ice on Mars based on other data sources. That's what the lines represent. 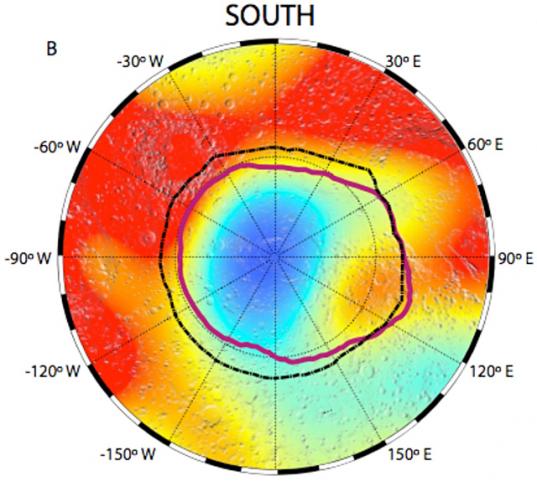 The magenta line is drawn based on data from Mars Odyssey's Gamma-Ray Spectrometer, which mapped out the abundance of hydrogen in the shallow subsurface, down to about half a meter's depth. The GRS team took their map of hydrogen abundance and asked: if all of the hydrogen were bound into water molecules, how much of the material that we're sampling consists of water? That produced another map showing "water-equivalent hydrogen" abundance. The magenta line on the MARSIS map of the south pole corresponds to the area inside of which the GRS team saw more than 10% water equivalent hydrogen.

The dashed dark line is based on something different: Martian meteorology. It denotes the region within which near-surface ground ice is stable throughout the Martian year, based on the meteorologists' model of Mars' atmosphere.

The magenta and dashed lines correlate very well, forming an almost perfect circle around the pole except for a little excursion around 110 degrees east longitude. According to the text of Mouginot's paper they also match nicely to the areas where polygonal ground (a terrain that forms in permafrost) is observed in photographs. And they also match fairly nicely to the region of low dielectric constant, although I'm curious about what exactly is going on at 110 degrees east. (The local low around 60 east does correspond to the lowest point on Mars, Hellas planitia.) You can definitely say that all areas with dielectric constant lower than 5 are within those two lines. So there's a very consistent story at the south pole: areas with patterned ground and low dielectric constant represent a permanent polar ice cap that's in communication with the atmosphere and veneered by a thin layer of sediment.

But this same story doesn't work at the north pole. Here's the same map of dielectric constant, GRS 10% water-equivalent hydrogen, and near-surface ground ice stability, for the north pole. 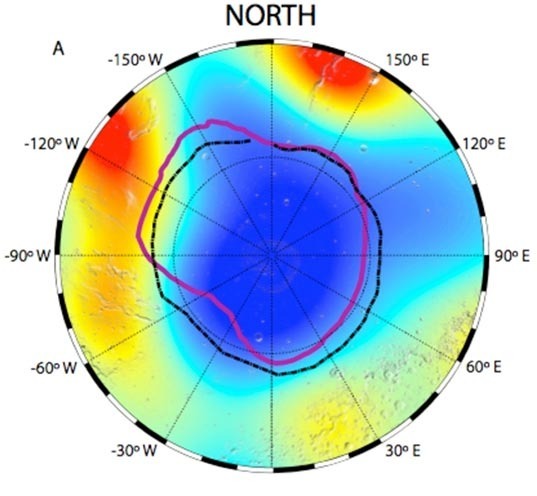 Here, the magenta and dark lines are in roughly the same places, indicating that Mars Odyssey is detecting near-surface ground ice in the regions in which the meteorologists say that near-surface ground ice should be stable year-round. Since that works so well, you would expect the magenta and dark lines to encircle all the terrain with dielectric constant lower than 5, as they do at the south pole. But they don't. There is a huge area of low dielectric constant, with excursions way south of 30 degrees north latitude in three locations: Amazonis Planitia (150 degrees west), Chryse Planitia (30 degrees west), and especially Utopia Planitia (100 degrees east). MARSIS can't be detecting near-surface ground ice in these locations, because it's not stable; it would sublimate into Mars' atmosphere quickly, in geologic terms anyway. So they need another explanation.

It's pretty clear that the map matches very well to the topographically low area of Mars' northern hemisphere, as measured by Mars Global Surveyor's MOLA (Mars Orbiter Laser Altimeter) instrument. Do be careful when comparing this map to the dielectric constant one; they're oriented the same way, but the MARSIS one only goes to 30 degrees north latitude, while the MOLA one goes all the way to the equator. 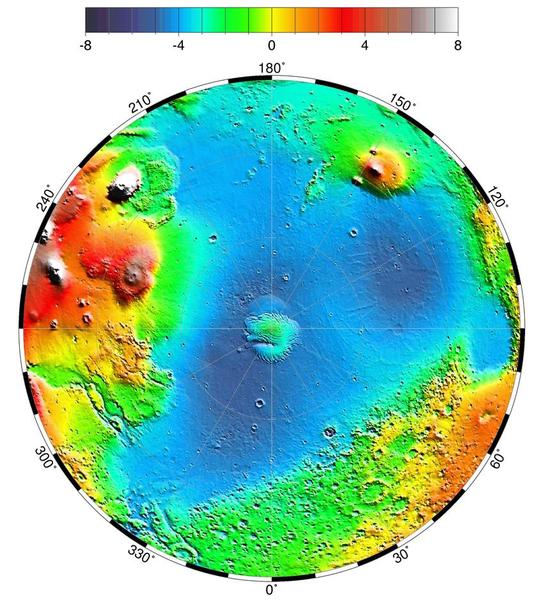 Mouginot and his coauthors acknowledge that the distribution of low dielectric constant "is generally consistent with the global topography." But they go on to say that it "displays an even better consistency with the 'Deuteronilus' shoreline," a putative paleo-shoreline that surrounds Mars' northern plains that was mapped out by Stephen Clifford and Tim Parker based on their analysis of Mars Orbiter Camera images in a study published in 2001. Here's the map of the dielectric constant again, and this time there are two of these "paleo-shorelines" superposed on it. The Clifford and Parker putative shoreline is the one in the solid black line. 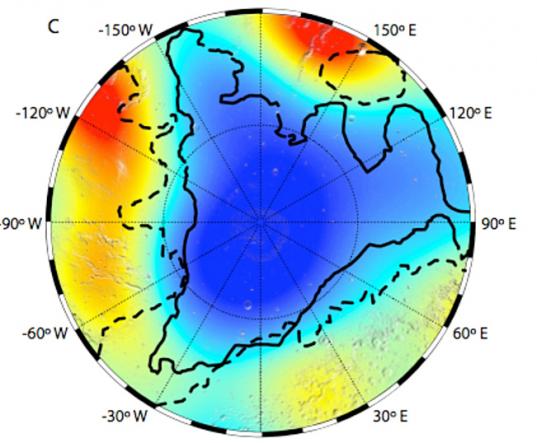 Now, it's hard to tell just by visual inspection whether or not the Clifford and Parker shoreline is really a better match for the dielectric constant distribution than the topographic map is. (The ancient shoreline, if it really was a shoreline, is no longer at a constant elevation thanks to geologic activity, like volcanism and associated uprising of Martian plateaus, that's happened in the billions of years since the putative ocean was there.) I assume that they did some kind of investigation that verified their statement that the shoreline is a better match than the topography, but they don't mention it in the paper.

So what does this mean? Here's the story that Mouginot and his coauthors tell.

The "Deuteronilus" shoreline...extends down to encompass the three main catchment areas of the large outflow channels that emanate from the southern highlands. The discharges associated with these outflow channels may have supplemented or covered any surviving frozen remnant of the original Noachian ocean and Hesperian volcanic deposits. It is likely that the episodic fluvial evolution of the northern plains resulted in a complex stratigraphy, consisting of massive ice deposits interbedded with layers of sediment and volcanic materials that may have been emplaced before the underlying ice had sublimed away.

This is a nice story, and it's nice that two separate lines of investigation (mapping putative ancient shorelines on photos and mapping a physical property of the subsurface rock) are consistent with the same story, but it's still not proof. Mouginot and his coworkers thought of one further way to poke at this story. They looked at a geologic map of the north pole drawn by Ken Tanaka and his coworkers in 2005, based upon photos from Viking, Mars Global Surveyor, and Mars Odyssey. The map identifies different kinds of surface materials that appear to be sedimentary (deposits from outflow channels, for instance), and other kinds that appear to be volcanic (like lava flows). Mouginot and his coworkers took each mapped unit from Tanaka's map and calculated an average dielectric constant for that unit. And they found that, indeed, areas throughout the polar regions that were mapped by Tanaka as being sedimentary displayed low dielectric constant, while areas that were mapped as volcanic (especially the ancient, Noachian ones) had high dielectric constant.

Taken together, we still haven't proven that Mars once had a vast northern ocean, but multiple lines of evidence are consistent with the story that such an ocean once existed. Can we learn anything more about that ocean from the dielectric constant that the MARSIS team measured? Mouginot said, let's assume that the sediments started out as solid volcanic rocks with a dielectric constant of 9, like those of the Tharsis volcanic rocks. A little modeling tells you that in order for them to presently have a dielectric constant of 4.5 -- the average value for the sediments within the modern north polar basin -- then the sediments have to have a porosity of about 35%. Or, if the low dielectric constant is because of the presence of ice, the sediments would have to consist of 60% ice by volume. There's no way that the MARSIS team can distinguish between these two, and the truth "may reflect contributions from both cases." So if there was an ocean, the MARSIS data can't tell us whether its water is still locked in sediments buried hundreds of meters underground, or if it sublimed away.

Phew! When I sat down to write this post I thought I was going to dispatch it pretty quickly, but here I am at 2500 words about a paper that probably wasn't much longer than that. Thanks for your patience. Anybody who's read this far gets a cookie!