I could watch this video a hundred times. It's basically a cell phone video shot by a spacecraft in orbit around the Moon. It's the first release from MoonKAM, tiny cameras included on both GRAIL spacecraft whose only purpose is public outreach. Classrooms can sign up for opportunities to propose sites to image. 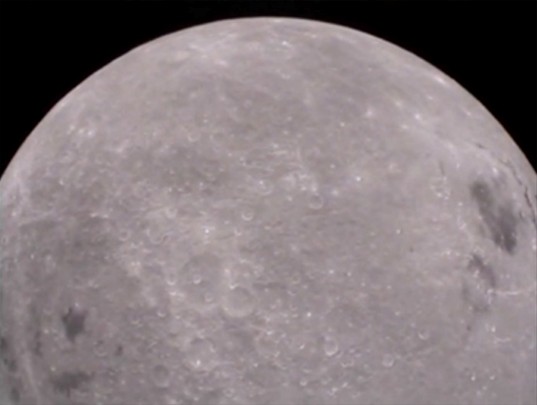 The Moon's farside from Ebb's MoonKAM

Now, this is a pretty wide view of the Moon. With some help from Eyes on the Solar System, I can figure out about when this picture was taken, and about how far Ebb was from the Moon at the time. Here's a link to a moment within Eyes on the Solar System on January 19 that matches the still. At the time of the photo, Ebb was more than 1,200 kilometers from the Moon, or about 40 times farther away than its eventual (50-kilometer) orbit will be. So, once MoonKAM is operating from the final science orbit in March, its window on the Moon will be 40 times narrower, at 40 times the resolution. Flying over the Moon from that height will be fun!