What's Up in the Solar System in February 2012

I think the word for the month of February is: "routine." The 21 missions that I'm tracking (amounting to 24 spacecraft) are nearly all in routine science operations or cruise behavior, gathering data from across the solar system or journeying to new destinations. Of course, this is a smaller number of missions than I was tracking last month, with the end of Phobos-Grunt and Yinghuo-1's brief appearances in these updates. And it's also possible that we've heard the last from the IKAROS solar sail mission, but unlike the ill-fated Mars missions, IKAROS has already succeeded far beyond anyone's expectations.

So let's travel across the solar system to check in with each one, but first, here's Olaf Frohn's diagram of where all our wandering spacecraft are as of tomorrow. Compare it to last month's to see how things have moved. 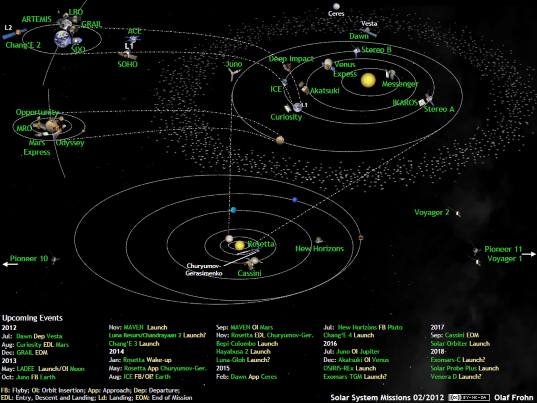 NASA's MESSENGER Mercury orbiter will complete its primary mission on March 18, but has won a one-year extension. Watch their gallery for regular image releases. Here's a neat release where they define and explain one source of artifacts in MESSENGER images, frame transfer smear, and show how they can correct for it. I also like this one showing how different the view of a crater can be, depending on the solar phase angle..

ESA's Venus Express remains in orbit on a mission that has been extended through 2014. A slew of mission status updates have recently been added to the Venus Express website. They're not current yet -- they've posted up to October 2011 so far -- but they're catching up. (Prior to this, no new status updates had been posted since the middle of 2010.).

The twin spacecraft of NASA's GRAIL mission, now named Ebb (formerly GRAIL-A) and Flow (formerly GRAIL-B) are slowly reducing the size of their lunar orbits, heading toward a circular one with an altitude of 50 kilometers. Their gravity mapping science work should begin in March. After the lunar eclipse in June, the spacecraft will trade places and produce a second map from an altitude of only 25 kilometers. The mission will end in December, and the spacecraft will crash into the Moon. If the orbital data in JPL's Eyes on the Solar System app are current, Ebb is actually already in a very nearly circular orbit, while Flow's is still elliptical with an apoapsis at around 1400 kilometers elevation. !

NASA's ARTEMISspacecraft are presumably still orbiting the Moon, but there's no recent mission status information available. They were sent into lunar orbit in 2011 to study the Moon's magnetic field, and should last for at least seven years.

Out at Mars, it's late autumn in the southern hemisphere. (It's currently Ls 64.4.) Opportunity sol 2851 is drawing to a close. The mission has to be cautious with power, maintaining a 15-degree northward tilt to its panels through the Martian winter. At last report, the rover was only producing 279 watt-hours from its solar panels, a pretty low number. The solstice is not for two months, so the first half of 2012 will probably be pretty quiet for Opportunity. Indeed, the rover stood still all month, usually gathering about four frames per day of a giant panorama from its current location. The mission has also been taking advantage of Opportunity's current immobility by performing radio tracking experiments intended to establish whether or not Mars has a liquid outer core, as Earth does. Here is Eduardo Tesheiner's latest route map and Google Earth kml file for Opportunity (a month old now).

ESA's Mars Express is carrying on with an extended mission, planned to run through 2014. In 2011, a serious problem developed with a solid-state memory device that caused it to enter safe mode repeatedly in August and September. But the Mars Express Blog has recently reported the happy news that all of Mars Express' science instruments have now been returned to routine operations. Unfortunately for the public, the memory problem has precluded the use of the Mars Webcam since October of 2011.

NASA's Mars Reconnaissance Orbiter is keeping an eye on Mars' weather with MARCI; they report little dust activity lately, and a thin cloud cover over Opportunity. As always, check in on the latest captioned image releases from HiRISE for your dose of spectacular photos, and make sure you follow the links at least as far as the browse versions of the images, because the thumbnails that are automatically posted with their voluminous image releases routinely fail to convey the awesomeness hidden in each photo. Here's one with a spectacularly craggy crater rim, shedding wide aprons of dark debris onto a much lighter crater floor.

NASA's Mars Odyssey is now the longest-lived spacecraft ever to operate at Mars. You can see the latest from its THEMIS instrument here. I like this one showing the ridgy top of an extremely ancient lava flow in Daedalia Planum.

The NASA-ESA-ASI Cassini spacecraft is now wrapping up its Rev 160. The orbit is now very slightly out of the ring plane, which means that there are no opportunities for mutual event images (photos containing more than one moon). As a result, Cassini is pretty much ignoring the moons other than Titan for the time being. A targeted flyby of Titan on February 19 will return Cassini to the ring plane, setting up three consecutive super-ultra-close targeted flybys of Enceladus at altitudes of about 75 kilometers in March, April, and May. To see what Cassini's doing when, check out my long and detailed page on Cassini's tour of the Saturn system, and look to the Looking Ahead page for more detailed information.

NASA's New Horizons has 10.08 AU to go to reach Pluto. There are 1259 days left until Pluto closest approach. January was a busy month of housekeeping duties, preparing for a three-month hibernation period. It was configured, for the first time, to use its SWAP and PEPSSI instruments to collect science data during hibernation, measuring the solar wind in the region between Uranus and Neptune, as only the Pioneers and Voyagers have done before it. Previously, only the dust counter operated through hibernation. It's on course for a January to July 2015 encounter with the Pluto and Charon system. In the meantime, the search continues for New Horizons' future Kuiper belt target(s); go to icehunters.org to help them with their search!

Juno spacecraft is outbound from the Sun. Informal status updates get posted to its Twitter feed. In January it was 1 AU from Earth. On January 3, they turned on their second string of solar cells for the first time, increasing available power from 486 to 1500 Watts. It's still outbound, heading way beyond Mars' orbit before heading sunward again. An Earth flyby in August 2013 will send it on to a July 2016 Jupiter arrival.

NASA's Curiosity, or Mars Science Laboratory rover, is now 108 million kilometers from Mars. A major trajectory correction maneuver on January 11 put it on course for its Mars landing, 187 days from now. In the meantime, its Radiation Assessment Detector has been busy monitoring the radiation from the recent burst of solar activity. Curiosity will be landing in Gale crater on August 6, 2012, just after 5:00 UTC (August 5, after 10:00 p.m. here in Los Angeles). On Mars, it will be in the midafternoon of a late winter day in the southern hemisphere at the landing site at 4.49°S, 137.42°E. Its nominal mission will last one year but it should go on much longer.

JAXA's Akatsuki is now in solar orbit, on its long cruise to a second encounter with Venus. This month, JAXA announced that they plan to shoot for orbit insertion in December 2016.

JAXA's IKAROS is now hibernating. It has nearly exhausted its maneuvering fuel, so can no longer maintain a minimum solar incidence angle on its solar cells, reducing available power. It's also near its apoapsis (it'll reach apoapsis in March). As a result of both factors, it has probably entered hibernation mode. JAXA will attempt to resume communications with IKAROS after the spacecraft's orbit has taken it close enough to the Sun to make it power-positive. It was last heard from on December 24, 2011.

ESA's Rosetta is now on the final, long leg of its cruise to its target comet. It's been placed into hibernation and will not communicate with Earth again until January 2014. The next object it'll encounter will be its goal, comet 67/P Churyumov-Gerasimenko; rendezvous is set for May 2014. A great deal of image data from OSIRIS, covering Earth and Mars flybys, was released last month. This month will see the fifth anniversary of the Mars flyby.

Finally, NASA's Voyager 1 and 2 spacecraft are still going strong. Follow the current position of both using the NASAVoyager2 twitter feed. (This is not an official NASA account, but it's the one with the most information.) Last month, Voyager 1 turned off a heater in order to reduce its power consumption. Voyager 1 is still conducting "roll-and-hold" maneuvers to measure the direction of the solar wind.

I could not access your Planetary Report(PR) for January/February 2012, just those you have posted for easy access and download. I was searching for that graph displaying future deep cuts in NASA. I'm not referrin to the bar-plot in March 2012 PR. Do you have this available?