Phobos-Grunt is no more

Phobos-Grunt has returned to Earth, a lot sooner than it should have. Yesterday, at approximately 17:45 UT, the Russian spacecraft and its passengers, including a Chinese orbiter and the Planetary Society's LIFE experiment, descended into Earth's atmosphere. The Russian military quickly announced that the mission was over, mentioning a precise time and location (17:45 and 1,250 kilometers west of Wellington Island, Chile, near the southern tip of South America). But that time and location was based upon model calculations, not on any actual detection of the spacecraft's reentry. According to journalist Jim Oberg, the spokesman actually said "From calculated data of the main space surveillance center of the Space Troops, the fall of fragments of F-G should have occurred at 21:45 Moscow Time..." (emphasis Jim's). Because of uncertainty in those models, it's possible the spacecraft entered the atmosphere a bit earlier or later; it could have fallen in the Pacific, or over a wide swath of South America or even in the western Atlantic ocean. So far, no credible reports of sightings or debris have surfaced, and it's likely (as happened with UARS and ROSAT) that we'll never know precisely where the spacecraft fell. The world is a big place, and is sparsely inhabited. It is especially sparsely inhabited in the far southern Pacific Ocean, which contains a large swath of the possible reentry locations. The following map of possible reentry locations was produced by Robert Christy and posted on his zarya.info website. 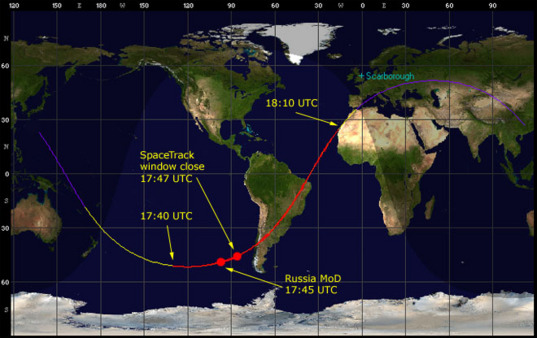 The map shows the approximate ground track of Phobos-Grunt for the period covered by the significant majority of estimates for its re-entry time. There was a very strong likelihood that re-entry would occur along this line, but it was not certain. As far as is currently known, the reentry was not observed. The yellow and red segments of line represent Phobos-Grunt in daylight; the purple segments represent the spacecraft's path in nighttime. If the re-entry was to have been seen visually, then it would have had to occur on the purple segments of track.

The RIA Novosti news agency originally quoted the Russian Ministry of Defence saying that re-entry was 1250 km west of Wellington Island, Chile at 17:45 UTC. This time and location was based on model results, not on any actual observations. Other published guesses from the Russian space agency and "unnamed experts" said that the location was not known, and Phobos-Grunt might have travelled as far as Brazil and the Atlantic Ocean. Spacetrack was slightly enigmatic, saying only that it had "Decayed Inside [the] Predicted Window," which was 16:59-17:47 UTC. The end of the Spacetrack window is marked as a red dot on the map. In the course of January 16, Roscosmos stated that the re-entry point was unknown but the event occurred between 16:40 and 17:10 UTC. This is the segment of track colored red on the map.

Taking all three of these statements together, then 17:45 is a plausible time, but is not the only possible time. In reality, a re-entry does not occur at a single point. A large re-entering object sheds fragments over an length of ground track with some burning up immediately and others taking time. Some can fall to Earth up to several tens of kilometers on either side of the track. All we can say at the moment is that the start of re-entry may have been approximately 16:45 UTC and that the event might have covered the ground as far as Brazil.

It seems there is not a lot more to be said. However, the European Space Agency cryptically promised an "update on Phobos-Grunt reentry, including an analysis on the reentry time and location" early this morning, and that it would be available "shortly." I held this post for several hours, hoping for that update to appear, but it hasn't. So there still may be some more detailed information available that's not yet been published.

Yesterday morning, as I was sitting deathwatch at my computer, Phil Plait invited me to participate in a Google+ Hangout with him to talk about the end of Phobos-Grunt; you can watch the recording below. (I exited the Hangout partway through in order to take care of some things for my kids, but returned about ten minutes later.) One of the points I tried to make was that Phobos-Grunt may have failed, but there are a lot of successful Mars missions currently flying: the venerable Mars Odyssey (longest-lived Mars mission ever), the rover Opportunity, the European orbiter Mars Express (which is studying Phobos in depth), and Mars Reconnaissance Orbiter. And, of course, Curiosity is on her way.

On January 15, 2012, the Russian spacecraft Phobos-Grunt re-entered over the Pacific ocean and burned up. During this time, Phil Plait reported the event live with Emily Lakdawalla on a Google+ Hangout.