There was good news and bad news in this morning's press briefing about Curiosity rover's upcoming landing on Mars, just eight weeks from now. First, the good news: the landing ellipse has shrunk. What does that mean? When you try to land something on Mars, you aim at a specific location, but nature has a way of throwing unexpected things at you. The Curiosity team has built extremely sophisticated computer models of their spacecraft and of the Martian atmosphere and then threw a jillion different sets of starting conditions at the simulated rover on landing day. Those simulations result in a scatter plot of sorts of likely actual landing sites for the rover. Draw an oval around those, and you have what's called a landing ellipse. Read here for a much more detailed explanation of what exactly a landing ellipse is.

Anyway, getting back to Curiosity, the landing ellipse used to be 25 kilometers long by 20 kilometers wide, but now it's much smaller: 20 by 7. This is actually not a surprise -- throughout the site selection process it was mentioned that the final ellipse would likely shrink -- but I am pleasantly surprised by how small they got it. Here's a new map of Gale crater with the new ellipse in. This map was produced by Doug Ellison for JPL using data from three different orbiters: topographic data from Mars Express' High Resolution Stereo Camera, the beautiful detail in the image from Mars Reconnaissance Orbiter's Context Camera, and color from Viking Orbiter. Yes, amazingly, Viking's is the best global map of Mars' color that we have, and likely to remain so. 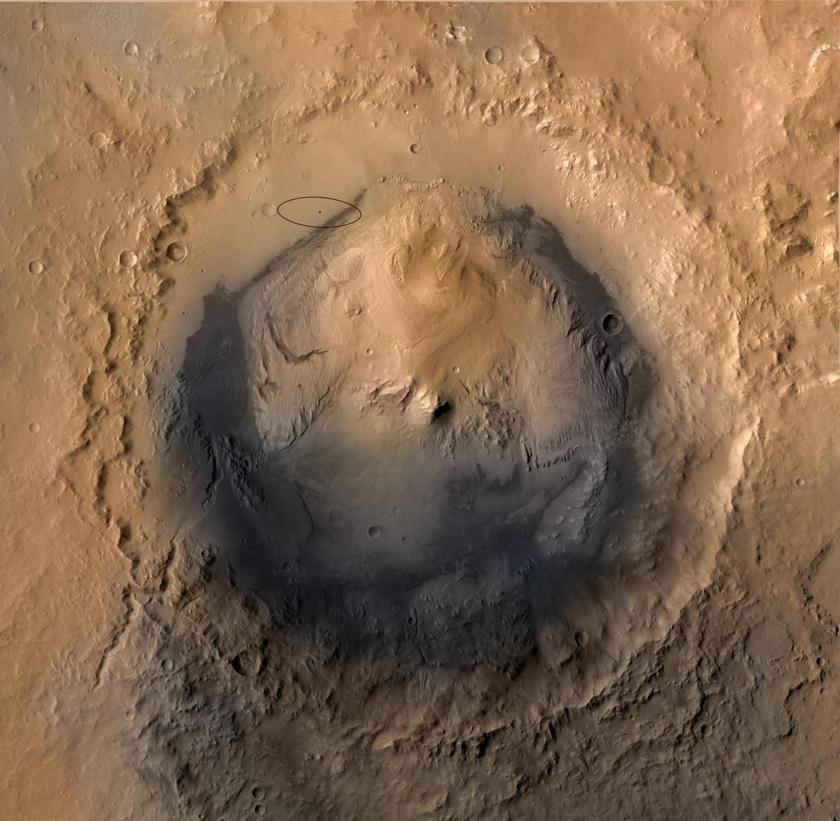 A "+" marks the spot within Gale crater at which Curiosity was targeted. Considering all the uncertainties inherent in the landing, engineers were confident it would land within the black ellipse, which is 20 kilometers long and 7 kilometers wide. Gale crater is 154 kilometers wide.

It's difficult to understand the significance of those numbers without some comparisons. Everything about the Curiosity landing site selection process has been so much easier than it was for Spirit and Opportunity. When Spirit and Opportunity landed, we had far inferior understanding of the dynamics of Mars' atmosphere compared to what the subsequent decade of Mars exploration has given us. JPL's navigators could position Spirit and Opportunity's entrance into the top of Mars' atmosphere with high precision. But once the spacecraft penetrated any distance into it, the uncertainty in its density and in its wind speeds and directions produced a large uncertainty in how rapidly the atmosphere would slow the rovers' descent.

That uncertainty, coupled with the fact that the rovers' parachute-assisted descent was entirely ballistic -- meaning there was no steering whatsoever -- meant that at one point during the landing site selection process, the region in which Spirit and Opportunity could possibly land was a very long, skinny ellipse, roughly 15 kilometers wide but a whopping 160 kilometers long. There were very few geologically interesting places on Mars with safe, rock-free, hill-free, dune-free, dust-free areas of that size. Gale crater was actually considered as a landing site but the 150-kilometer crater with its tall central mountain was not big enough; they couldn't guarantee a 400-million-dollar rover wouldn't smash into the central mountain or walls on landing.

The shrinking of Curiosity's landing ellipse puts its center considerably closer to the mountain in the middle of Gale crater than it used to be. Curiosity's handlers estimate that that will reduce the rover's traverse time from landing site to mountain base by about four months -- not bad at all, considering that the nominal mission is one year. Ironically, there's a small number of Mars geologists who are slightly chagrined about this. While it's great to be so much closer to the real target, it means that Curiosity may miss the opportunity to play with one type of rock that would have been interesting to see along the way, the alluvial fans that spilled off of the northern walls of Gale crater. But I think most geologists are happy to pay that price in order to have so much more time at the mountain.

So that was the good news. The bad news: there's a lurking problem with the drilling system, in that there are materials including Teflon and molybdenum disulfide (if I understood John Grotzinger correctly) that wind up getting mixed with the sampled rock and delivered to the science instruments. They're working to understand its nature and develop workarounds; to do so, they've had to build two more drill test facilities in addition to the one they already had. Grotzinger was actually discussing ways to use the scoop only to get uncontaminated samples. I know that journalists like Dick Kerr and Dan Vergano have their hooks into this story, so I'll be looking for their reports later to see what specifics they dig up.

The last bit of bad news: Mars Odyssey is in safe mode, and it has to do with one of its reaction wheels. (Those stupid things cause problems on so many missions.) Like most spacecraft, Odyssey has four reaction wheels to help it control its orientation. Reaction wheels are spinning weights; by slowing or speeding their spin, Odyssey uses electrical power (which is renewable) rather than thrusters (whose fuel is not) to pivot. Three wheels are mounted perpendicular to each other, with a fourth, backup one at a slant to them all. One of the three primary wheels is sticky; in fact, last weekend, as it was going through zero spin (switching from one spin direction to the other), it stuck for several minutes before restarting, and that's what triggered the safe mode.

Clearly, Odyssey has options. They can try to keep using the sticky wheel; they can turn off the sticky wheel and begin using the slanted backup; they can just use thrusters, if need be. So Odyssey will be up and running again in a few days. But it will take them a few days to evaluate which option is best. Until then, Opportunity has no Odyssey data relay capability, which will slow them down, just as they had started driving again. Too bad, but those rocks in Meridiani aren't going anywhere; we'll just have to be patient.

Anyway, as a spacecraft, Curiosity is super healthy, so all looks as good now for landing day as it ever has. I'm anxious, though; landing on Mars is hard. And even after a successful landing, I'm going to be anxious for the mission. This mission has so very many tiny details, so many things to work out and get going before Curiosity can really drive anywhere. I'm worried that the great story of our Martian exploration adventure is going to get lost among those details, and the inevitable setbacks that will happen as Curiosity's mission begins and they try to do new things. Curiosity will be rolling toward the mountain eventually, but it may not be fast enough for an impatient public.

So, rover fans, I'm giving you a responsibility. You need to help with two things after Curiosity's landing. First: don't lose sight of the big picture. We are exploring Mars with the biggest rover ever, following up more than 40 years of discovery; it's one of our greatest adventures. Second: Curiosity's mission will be long, and will start slowly. I plan to describe it like this: Curiosity is going to be scaling Mount Everest. You don't land in India and immediately start walking; you need to set up a base camp first. There will be a base camp phase for Curiosity as she works out all her operational kinks and warms up her instruments. Only then will the driving begin. But, parked or driving, we're exploring Mars!

is that feature to the right of the landing ellipse just surface colouration? it kinda looks like hills, but im guessing its not

It's not clear to me which feature you're referring to. The very dark browns are surface coloration. There is a huge mountain in the center of the crater; the ellipse is just to the north of that. There are some hills to the right of the ellipse.

I know that setbacks and unexpected things like the "dust" in the drill are going to occur, but reading this story makes me even more concerned about landing. Considering what a wildly impractical (from my perspective) landing method has been chosen for Curiosity, ALL the ducks will have to be in a row for this thing not to turn into a smoking crater. Seeing something as "catch-able" and preventable as Teflon in the drilling system being found before the rover has even reached the planet does not inspire much confidence in me that the MSL team had their spit together in designing the landing sequence. I'm hoping this is a simple misunderstanding on my part so could you please elaborate on the nature of the drill problem? Is this a result of insufficient cleaning (or "too much" cleaning) before launch, or is this a case of testing revealing that, for instance, some of the "scoop" material itself might come off and mix in with samples? Thanks for the (as-usual) excellent blog update Emily!

MSL is doing great and and I am not too worried about the teflon seals. Compare MSL to the Russian Phobos-Grunt Mars missions which is at the bottom of the Pacific. Remember what Emily said; no truer words have been said about this issue: "This mission has so very many tiny details, so many things to work out and get going before Curiosity can really drive anywhere. I'm worried that the great story of our Martian exploration adventure is going to get lost among those details, and the inevitable setbacks that will happen as Curiosity's mission begins..."

The only major issue of serious concern about MSL post ED is the L phase. That skycrane HAS to totally come free and lift upward. At a safe altitude it needs to pitch and or yaw to fly clear of the rover. I do not know if it is to softland or simply plummet to impact at flame out. An alternative manuever is to back out or move forward (relative terms) to avoid the rover with the exhaust. I don't know what scenarios of failure correction can be carried out with the skycrane design. If I was the project manager I never would have approved of the design. Even if it works at touchdown I still stand by my words, I never would have approved it. One failure to release and the mission is basically over. The rover should have been held inside a track on a pitchable bed which the wheels would roll out of upon driving off of the bed onto the surface. The track would hold the rover in place all through EDL in conjunction with the parking software. Just my idea. I really do not like seeing S/C fail in any manner. I hope MSL has a successful EDL!!!!

I really enjoy Emily's blogs! And as much as I want to be patient about MSL, I will be bitting my nails all the way from now until Aug. 5, until I read that it's safley in place!