I've always been a fan of the Mars Express Visual Monitoring Camera (called the Mars Webcam by its team), despite its relatively poor quality. The camera was included on Mars Express to monitor the departure of Beagle 2 and was not used for years after that. When it was finally turned on, it proved to be able to capture global photos of Mars from a unique perspective. But it was a casualty of the solid state memory problem that afflicted Mars Express in October of last year; ESA rewrote operating software to work around the problem, but the Mars Webcam, not being a science instrument, had lowest priority, so was offline for several months.

It turns out, though, that ESA brought it back online back in May, something I hadn't been aware of until yesterday! What is new this week is that they are now putting out their photos via a Flickr page in a fully automated process that brings the pictures to the public almost as soon as they arrive on the ground. They've retroactively posted the entire data set, including images that I don't know if I've ever seen before, evidently taken before Beagle 2's deployment.

Just for fun, here are photos from every single Mars Express VMC observation sequence taken since the camera came back online in May. All of the photos were taken from just about the same distance, an altitude of 10,000 kilometers. In May it was summer in the northern hemisphere, so Mars Express had a full view of the distinctive catcher's-mitt shape of the north polar ice cap. Mars Express had to begin to shift its orbit at around this time in order to support the landing of Curiosity. Equinox came after Curiosity's landing, at the end of September, and we began to lose sight of the north pole.

These 56 views of Mars were taken between May 6 and December 15, 2012. The cadence was uneven -- some images are separated by only a day, others by as much as a month.

Here's one favorite image from the sequence. Through May and June of 2012, close to the dawn terminator, south of the polar cap, there were frequently whirly-looking cloud patterns. This global view contains two of them! Make sure to enlarge the above montage to see more cool polar cloud features. 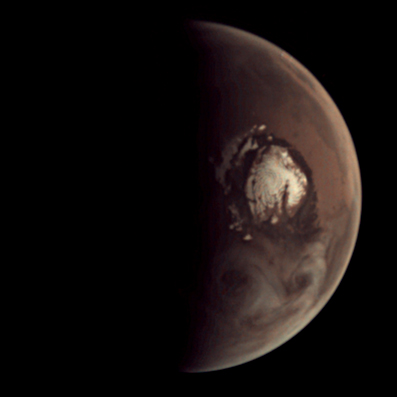 It's still the only ESA camera sharing raw data with the public, and the data and automated posting are brought to you by a very, very small team at the European Space Operations Centre. On behalf of space enthusiasts everywhere, I thank them for their hard work! It seems the agency values their work too, because they symbolically inaugurated their new tracking station at Malargüe, Argentina by downlinking the most recent VMC image sequence through it. Malargüe is ESA's third 35-meter telescope facility. (Learn more about ESA's tracking stations here.)

I happened to be online as the ESA team was waiting for that first downlink through Malargüe, and chatted with Daniel Scuka, the Web editor at the European Space Operations Centre. He passed me some messages from the operations team. Spacecraft Operations Manager Michel Denis was excited about the new Flickr archive: "14,000-plus images reprocessed, covering 2007 to recent. All now colorized! Full raw data are also available. As for the last 6 months' worth of images: we've taken a quick look, but haven't had time to look at them in detail. But we have seen some amazing features. So we expect more to come!"

Following the first downlink over Malargüe tonight, we will consider the Flickr page to be open for business. Unfortunately, due to the upcoming solar conjunction and associated low bitrate season, we're unlikely to get any downlink slots for VMC for a few months, but once the Mars Webcam is taking pictures again, the images will be published for the world to see within seconds of them being received on Earth. The low priority of VMC images means that their downlink to Earth can be some time after the observation.

The revival of the tool coincides with the return to nominal operations following a series of anomalies with our solid state mass memory last year. We essentially had to work out a new way of flying the spacecraft, and that didn't permit us to operate VMC in the manner we had previously. Once we had all of our prime instruments operating again, we had to review how to use VMC. This took the form of an "onboard control procedure", a small bit of code onboard that we uploaded in order to manage the observation cycle.

Obviously it took time to plan, implement, test the new method, then test and test some more. Only once we were confident of being able to safely operate VMC without impacting the other instruments could we then turn our attention to the publishing software.

Based in part on tools developed in-house as part of the solid state mass memory anomaly recovery process, and on the previous version of the processing software, the new tool is designed to be a "hands-off" autonomous utility that will retrieve the spacecraft data packets from our archive servers, extract the raw images, turn those into real pictures, then publish them on Flickr, Twitter and of course the VMC Blog. The idea is to get the images out into the world for the public to see as soon as possible.

During the testing of the new tool, I noticed that a lot of the historical images (pre-2010) were only available in black and white, as the tools at the time did not support the extra processing required to extract the colour. So, before uploading these to Flickr, I fed them through the new tool. The results were stunning - never-before-seen details of the Martian surface and atmosphere. There are craters, volcanoes, ice-caps and clouds ... probably much more besides!

The commissioning of Malargüe was the final impetus to get the processing software finished, so that we could display the symbolic "first data" to the world as quickly as possible. Now that this has been achieved, there are no more barriers between VMC and its adoring public (except the Sun during Solar conjunction, of course!).

Wow! I was just finishing reading that informative piece on the Mars Webcam when I noticed that for the first time I've been allowed access to make comments. Thank you Planetary Society, you are thorough in being nice. As a society you check out as creme de la creme. I wonder with so many images amassed by the Mars Webcam if someone will be compiling video footage?

Some of the photos pre-2011 were taken from much lower altitudes, some close to Mars Express pericenter (250-400km). After the on-board mass memory anomalies in summer 2011 these 'close range' sequences were no longer operationally possible. Perhaps they again will be one day in the future - technically there is no reason why the VMC still cannot be used below orbit apocenter.