Pretty Picture: Curiosity on the edge of a geologist's paradise

On Saturday, while parked for the Thanksgiving holiday at the edge of Glenelg, Curiosity took a lovely panorama pointed to the east and into Glenelg. Glenelg, you may remember, is the name given to an area 400 meters east of where Curiosity landed. The Curiosity team decided to go there first before turning south toward the mountain because it was a place where three distinctly different rock units (as seen from space) were exposed. Here is one of those rock units, the "high thermal inertia" unit. The site where Curiosity is now sitting has been named Point Lake, and you can see it from this recently-released JPL version of the giant panorama shot from Rocknest.

The sol 107 panorama, taken by the telephoto Mastcam-100, shows a geologist's paradise. There's almost nothing but bedrock here. Bedrock is rock that's still in place, not broken and tumbled far from the place it formed. Most of the broken cobbles we see here are clearly fragments weathered out from adjacent, still-intact masses of rock. Little sand or dust covers the rock. As for the rock, it's clearly layered, horizontally. Some layers are more resistant to erosion than others. Some are thinner than others. These layers are pages in a book, just waiting for geologists to walk up to them and read what they have to say to us. 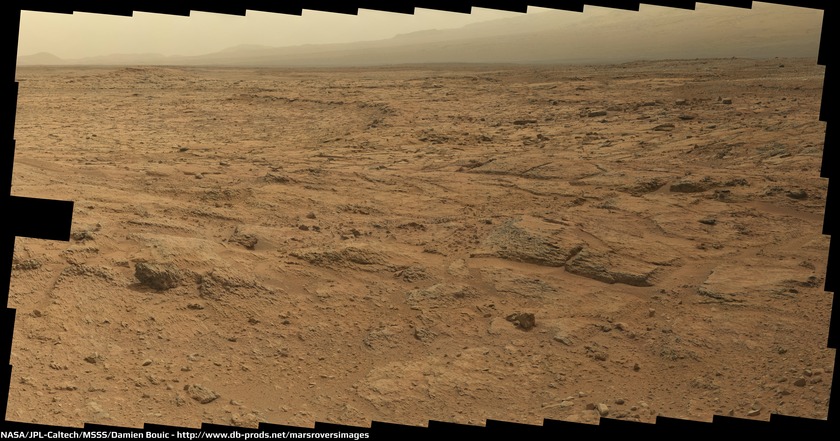 A 14-by-7 array of high-resolution Mastcam images covers a rocky landscape east of Curiosity. The rover had driven to the site (named Point Lake) on sol 102, right before the Thanksgiving holiday.

To give you a sense of scale, each Mastcam-100 framelet covers about 4 degrees. So this array is 56 degrees wide, covering a bit more than an eighth of the full circle view around Curiosity. (This is comparable to the field of view of a 35mm camera with a standard lens. Thanks to James Canvin for pointing that out.)

In the foreground, the rock has a funny texture -- some of it seems worm-eaten, some has a kind of streaky knobbly surface. Comments I've seen about these images elsewhere on the Internet lead me to believe that most people try to interpret these as primary fabrics, as being carved by water. But I'd interpret it differently. These rocks almost certainly initially formed in water, but water hasn't been here for a very, very long time. We're not seeing a landscape that resulted from any kind of active water-related process. On Earth, even the driest deserts have landscapes chiefly modified by liquid water, though liquid water visits only rarely. On Mars, that hasn't been the case for millions, maybe billions, of years. Rather than a living landscape, we're seeing a mummified one, the desiccated corpse of something that was once living. You have to look past the worm-eaten, leathery skin of this body to imagine what it was like when it was alive.

So I would suggest that the worm-eaten, streaky surfaces don't have much of anything to do with the environment that existed when these rocks formed. These are textures created by millions of years of weathering in Mars' modern cold, dry, windy, dusty environment. That streaky texture, I would argue, represents ventifacts on the bedrock (read all about ventifacts here). I think.

Curiosity will have to get up close and personal with the rocks to read what their compositions and their primary textures (layering, grain size, and so on) have to tell us about what Mars was like back in its geologically active heyday. I can't wait to see what the rover finds!

Emily, thanks for periodical blogs, especially about MSL! I appreciate your independent and well-informed articles. But one point of your actual article I cannot quite duplicate. I'm no geologist, but I can't help, that wind (and sand) allone cannot explain the streaky surface structure of the rocks. The rocks look to me much like a conglomerate, consisting of weather-resistent material, that embeds less resistant stones. So wind and weather may in parts invert the formation process of the rocks - as for many petrifications on Earth - , and in parts, especially for the conglomerates, degrade the rocks in the same sequence as they formed, yielding an inverted sculpture - much like holes in Pompei vulcanic ash. The visible holes in the rocks look to me asymmetric with a preferred directedness the same as the streaks. Therefore I guess, the streaks also tell something about the inner structure of the rocks, beyond wind direction. The rocks in the midground depression look smoother, so the inner structure of the rock seems to play a role for the surface structure, imho. At least the dust-filled forrows between the small plateaus must be of different origin. Either they are induced by the original landscape or by more modern expansion and shrinking processes from frost, temperature fluctuations or impacts. The layering is almost horizontal, indicating few tectonics. Taken together, I think the ancient landscape much ressembled the actual one, much more than most folded and eroded surfaces on Earth. The weather, of course, was competely different. That's my actual personal opinion as a non-specialist in that field. I fully support your excitement: "I can't wait to see what the rover finds!"