Curiosity is a rover again at last! She was parked at the dune named Rocknest for 40 sols, from sol 60 through 99. On sol 100, she drove right on top of the dune, obliterating her five scoop marks. Then on sol 102 she took a good long, 25-meter drive so that she's now right on the edge of the "high thermal inertia unit" that attracted her to the spot the team has named Glenelg. They'll drill somewhere in this area. I don't think they're quite ready to drill yet -- I imagine there'll be a few more sols of finding exactly the right spot -- but that should happen very soon. I've updated my sol-by-sol timeline with all the information I could find about the last two weeks of activity.

Look at the mess Curiosity made of Rocknest: 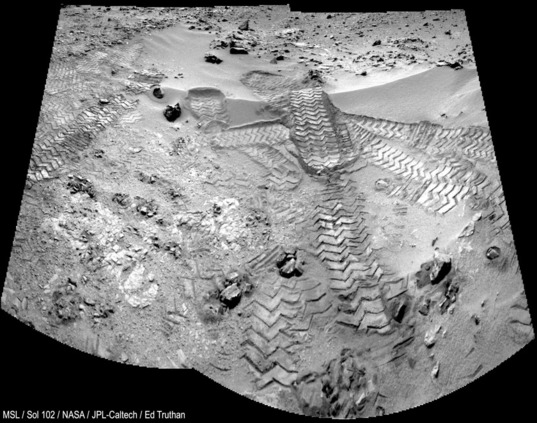 After spending 40 sols at Rocknest acquiring the mission's first soil samples, on sol 100 Curiosity drove on top of the dune, obliterating the scoop marks. On sol 102 she drove onward, briefly looking back at the dune.

Why did they stomp out their marks? Curiosity is going to make a habit of driving on top of places she's investigated, because one of her instruments, DAN, is designed to examine the hydrogen content of the ground under her belly. She's been taking occasional DAN observations while driving (not while she's rolling, but in pauses between drive segments), and she'll also take them of places she's worked.

The sol 102 drive also premiered a new capability for Curiosity: touch-and go. That's where the rover begins a day by unstowing the robotic arm, doing a quick APXS integration on a handy rock or soil patch, then restows and drive on. It's a way to eke a bit more science out of restricted sols (more on that in a moment).

If you check out Phil Stooke's latest route map for Curiosity you'll see that the 25-meter drive has taken the rover right to the edge of that high-thermal-inertia unit. It shows up as some fascinatingly rocky terrain in the first, partial Navcam panorama that has arrived on the ground. (According to Herkenhoff, the other 180 degrees of this pan should be taken on sol 103.) The contrast between the rocks on the left and the smoother, lighter stuff on the right in this photo is really striking. I can't wait for Curiosity to taste the new stuff!

Curiosity sol 102 panorama: on the edge of Glenelg

Following the sol 102 drive, Curiosity was at the edge of Glenelg and the "high-thermal-inertia unit" that attracted scientists to the spot. That unit is the flatter rock to the right; the rocks at left are likely of the type that Curiosity has been driving on since landing.

Theres another interesting thing going on in this photo: it looks like the view of the hills is murkier than it used to be. Mastcam images taken on sol 100 also look really murky. Scientists quantify the transparency of the atmosphere with a parameter called tau; it looks like tau is increasing. They don't talk about tau much on Curiosity because they don't have to worry about atmospheric opacity affecting solar power. Tau is mentioned in every update from Opportunity's mission on the other side of Mars. (I chronicled tau in detail during the big dust storms of 2007.) Over in Meridiani, tau is at a relatively high level above 0.6, but it's kind of variable.

Why has it taken so long for Curiosity to get moving? Several things have conspired to make her stop at Rocknest so long. We were warned that it would take a long time to perform the first soil sampling activities. There were a lot of parts that had to be worked through very carefully: selecting the soil; documenting the site; taking a sample, shaking, sieving, and examining it; using it to clean the innards of the sample handling system; rinsing and repeating; delivering the first samples to Chemin and SAM. Even once Chemin and SAM had their samples, it took time to work through them; SAM analyzes solid samples by heating them to a very high temperature in an oven and sniffing the gases that come off. Heating things takes a lot of power, so SAM operations usually precluded anything else.

Then there were other factors. Data volume was restricted, because Mars Odyssey had to be switched to its backup computer system. A key component of its main computer system -- its inertial measurement unit -- is showing signs of wearing out, so they wanted to switch to the backup before the original one broke, so that they'd still have a worn but functional one as a backup. Switching to the other brain took more than a week of careful work, during which the spacecraft wasn't available for data relay.

Two other very important switches took place. The science and operations teams switched from operating on Mars time (allowing their clocks to drift with the 40-minute-longer-than-Earth day) to operating on Earth time. And they also switched from onsite to remote operations; nearly all of the scientists have returned to their home institutions. Adjusting to remote operations slowed them a bit, but what has slowed them more is that they have gone straight into restricted sols.

Restricted sols should be familiar to any fan of the Spirit and Opportunity missions. They happen, oddly, whenever Mars time and Earth time are roughly coincident. Rovers operate by receiving a command uplink in the morning, executing those commands during the day, and returning data in the evening. Ideally, the operations team evaluates all that data over the rover's night, and prepares a new uplink for the next morning. If rover nights happen at the same time as operations team's nights, that doesn't work.

So right now, if the rover drives during its daytime, its post-drive images don't come back to Earth until the end of the operations team's day, too late for them to be used to plan the next sol. You can't plan another drive if you don't know the position and state of the rover; you can only plan activities that don't depend upon good knowledge of where the rover is. That means mostly remote sensing that doesn't need spot-on targeting. Image mosaics are okay; Chemcam not so much. Basically, you only get to do adventurous activity every other day.

All of which explains why it's been a very slow few weeks. We'll get out of restricted sols soon and activity should pick up again. Until we reach the spot where they want to try out the first drilling activity. Then they'll park again, but hopefully for a shorter period than the Rocknest stop.

Thanks for the update. These are very useful for those of us who are very interested, but don't have the time to follow developments every day.

Emily. Enjoyed the google plus hangout with you and Fraser Cain. Was glad to see you stress how the scientist should direct what Curiosity studies, and less emphasis on what the engineer wants to have looked at. Looking forward to more online gatherings.