I'm hosting this week's Cosmoquest Astronomy Hour on Google+. For the last few Hangouts I've just been doing Curiosity updates myself, but with the Sample Analysis at Mars team gave a report on their first results last week I knew I would need to ask for help in explaining the instrument and what it's telling us about Mars. So I'm grateful to the SAM deputy principal investigator, Pamela Conrad, for taking the time to join me at 1600 PDT / 2300 UTC on Wednesday. I'll embed the video here when we go live; or you can come back to this post after it's over to watch the replay. Feel free to add comments here with questions you'd like me to answer! 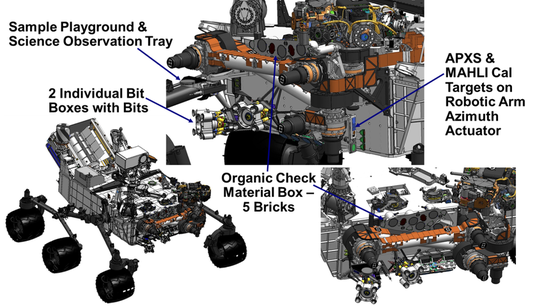 Components of Curiosity's Sample Acquisition, Processing and Handling (SA-SPaH) subsystem and where they are located on the rover. 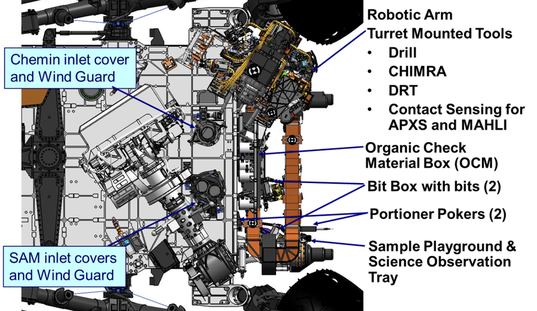 Not related to SAM, but I've a question about the Sample Playground; what's the purpose of the conical 'funnel' with a wedge cut out of it? In http://mars.jpl.nasa.gov/msl/multimedia/images/?ImageID=4823 you can see it between the poker and the observation tray.

D'oh! Can't believe I missed this in my Twitter feed. One question I would have liked to ask: With any of these experiments, would it be possible to determine what Mars would "smell" like? I'm assuming due to the chemistry of its composition, it would smell a bit rusty. I ask this because I recently read articles about astronauts' opinions on what space "smells" like (indirect observations).

Hi Emily! Thank you for the outstanding interview. I'm really enjoying the topics you cover on the CosmoQuest Science Hour. Look forward to many more in the future. Here is a question I have about the rocks on Mars. In the investigations on Mars so far, have scientists discovered types of rocks or sand that are unique to Mars and do not exist on Earth?

This is one of the best segments I have ever seen on MSL. Conrad was great; erudite and well spoken. One question though: I would think it would be relatively straightforward to detect life on Mars using SAM...at least Earth-like life. It would be through the stereochemistry of any organics found. Non-biological organics are usually racemic while biological organics are not. A detection L-amino acids would would be a clear sign of life. Or am I wrong? Maybe early Mars life if it ever existed created racemic organics...

@C Shawn Smith: Probably. I wonder if things smell differently under a carbon dioxide atmosphere (before you asphyxiate that is!) To the extent that they can determine what the molecules are -- and Chemin and SAM can do that much more accurately than anything sent previously -- we surely know what those smell like. @v8jeep: Well, Mars rocks often contain minerals that are considerably less common on Earth because of the different chemistry. But I don't know of any minerals found on Mars that have never been found on Earth.