Today I stumbled upon the Lunar and Planetary Institute's Lunar Sample Atlas, and was reminded of how much I love petrographic thin sections. They can make unassuming, cruddy looking rocks beautiful.

Consider a rock taken almost at random. This is Apollo 11 rock sample 10062. It's small, barely more than 3 centimeters across; it would nestle comfortably in the hollow of my palm. It's brown with white flecks, and it's "vuggy", which is a highly technical geologic term meaning "it has holes in it." It's not particularly pretty; just a brown basaltic rock. 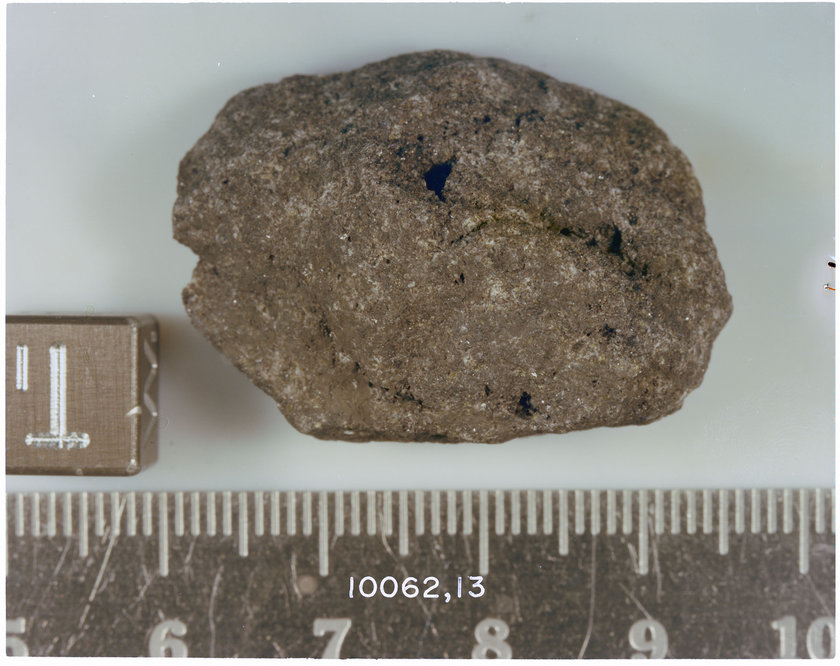 Color photograph of Apollo 11 Sample 10062. The ruler is marked in centimeters. The rock is a high-titanium basalt, and very old, 3.8 billion years old, dating to the time of the Late Heavy Bombardment.

It's hard to learn much about a rock when all you can see is a weathered surface like this. So after photographing the rock from all angles, petrologists took the rock to a big rock-cutting saw and sliced through it to open up a clean, cut surface. They sliced through it again, separating a thin slice. They mounted that slice to a glass slide, and then they ground down the other face of the slice until light could pass through the remaining rock. This is called a thin section. Put it underneath a microscope, and here's what it looks like: 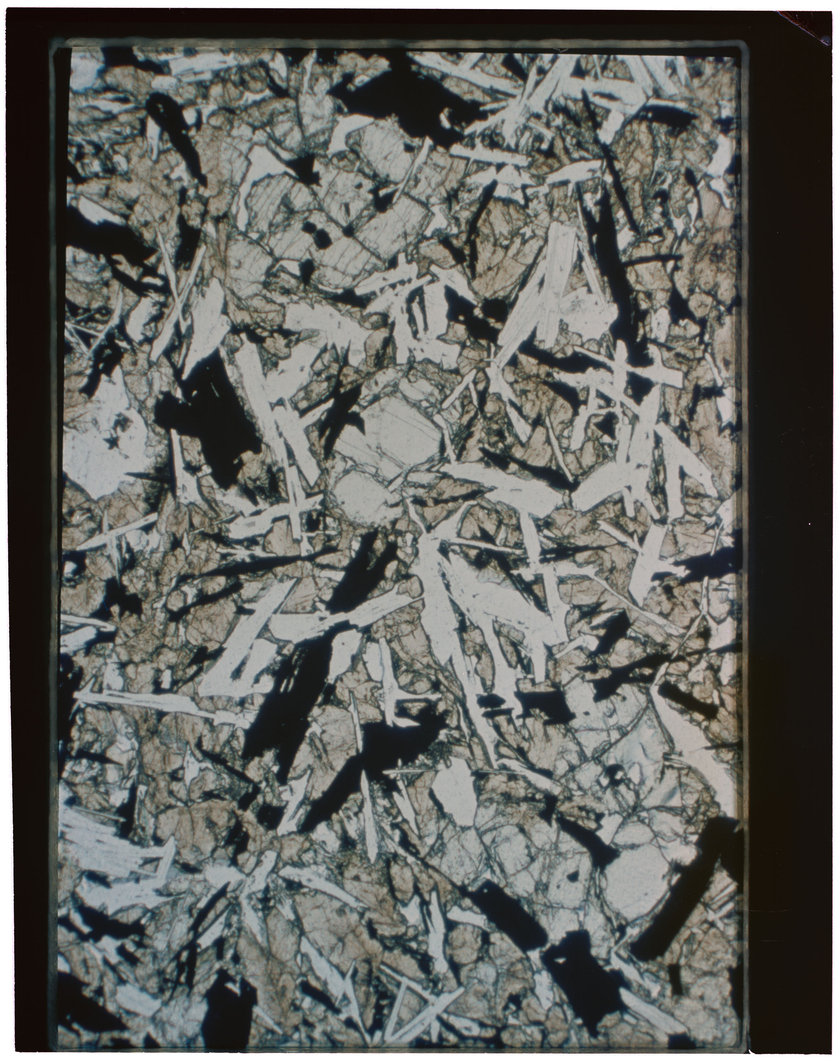 Those different-shaped needles and blocks are mineral crystals. Study the slide, and you should discern at least three, maybe four or more distinctly different kinds of crystals. There are black, opaque ones. There are transparent, clear ones, some of them round, some of them needle-shaped. There's a faintly yellowish or brownish material that seems to fill in the gaps between the first two. You might also notice a transparent, colorless one that doesn't seem as "clean" as the other colorless one.

Petrologists have a really cool trick to use to help them understand what minerals they're seeing. Petrologists use a special kind of microscope that is equipped with two polarizing filters. You may have polarizing sunglasses; a petrographic microscope's polarizing filters are pretty much the same thing. They only allow light vibrating at one particular orientation to pass through. One of the two filters is fixed. The other can be moved in and out of the light path. That one's polarizing direction is perpendicular to the first's. If you have nothing on the microscope stage and you look at the scene through both polarizers, it's black, because the first polarizer only admits light that's vibrating in one direction, and the second blocks all of that light. You might have experienced something similar if you tried to look at an LCD screen (like on a phone) with polarizing sunglasses.

But put a thin section of a rock in between the two polarizing filters (referred to as looking at the section under "crossed nichols"), and something magical happens. Rocks are made of minerals, which are crystalline structures made of a regularly repeating lattice of atoms. These atom lattices bend the paths of polarized light, rotating them into a new orientation. How much rotation happens depends on the mineral and its particular crystal structure; one mineral bends the light differently from another. The slide leaps into brilliant color, and the colors tell petrologists what minerals are present. Here is exactly the same thin section, viewed under crossed nichols. 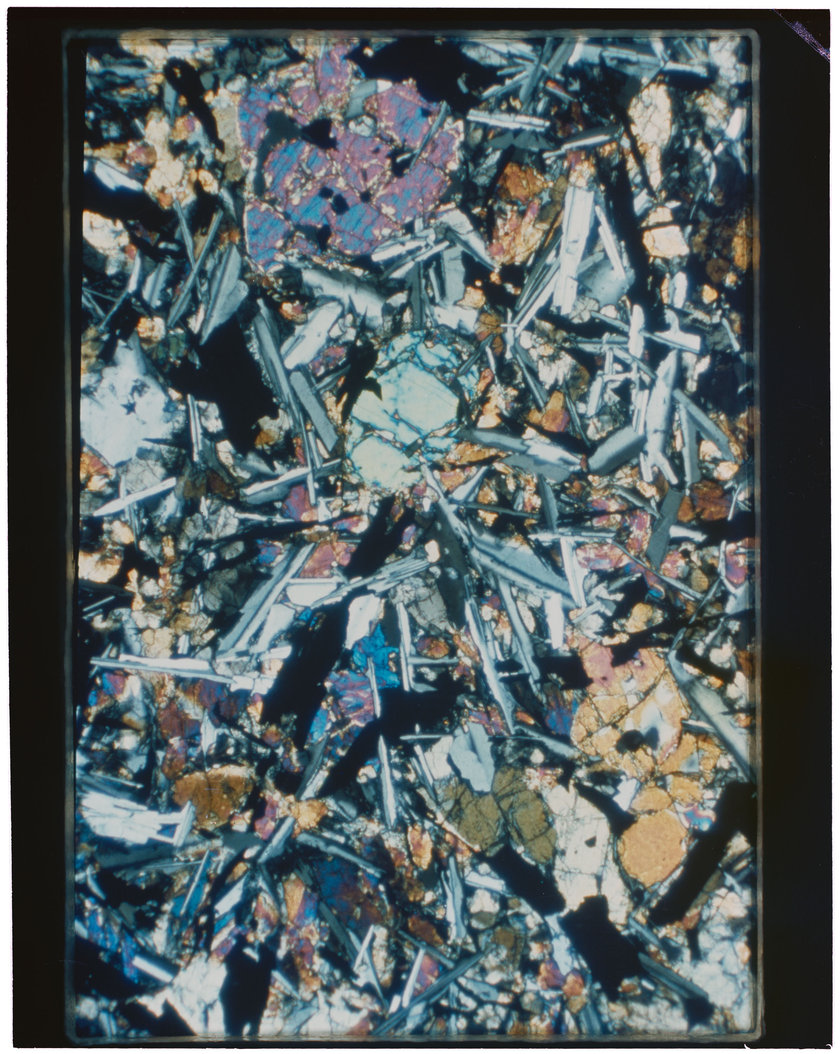 Amazing, isn't it? There's a wide variety of minerals here. The gray, needle-ish ones are plagioclase feldspar. The opaque black stuff is ilmenite, or titanium oxide. The yellowish-brownish stuff with no particular crystal shape is olivine, and the rainbow stuff is pyroxene. Here's a writeup detailing everything that a petrologist can see in this thin section.

I had no particular reason to post this today, except that I think thin sections are pretty. Enjoy!

Beautiful! Having prepared similar samples of metals and semiconductors for SEM, I was going to ask how much the grinding distorts the image fine scales as there is no scale given. (A practice I'm not fond of precisely because you don't get as much out of the images as you could.) But I see from the link that a FOV is ~ 2 mm, so we should be good for accepting the structures as is I think.