Huge self-portrait of Curiosity on Mars

This is spectacular. Curiosity used MAHLI, the scientific camera at the end of the robotic arm, to shoot a huge color portrait of herself sitting on Mars, with Gale's central mountain in the background. 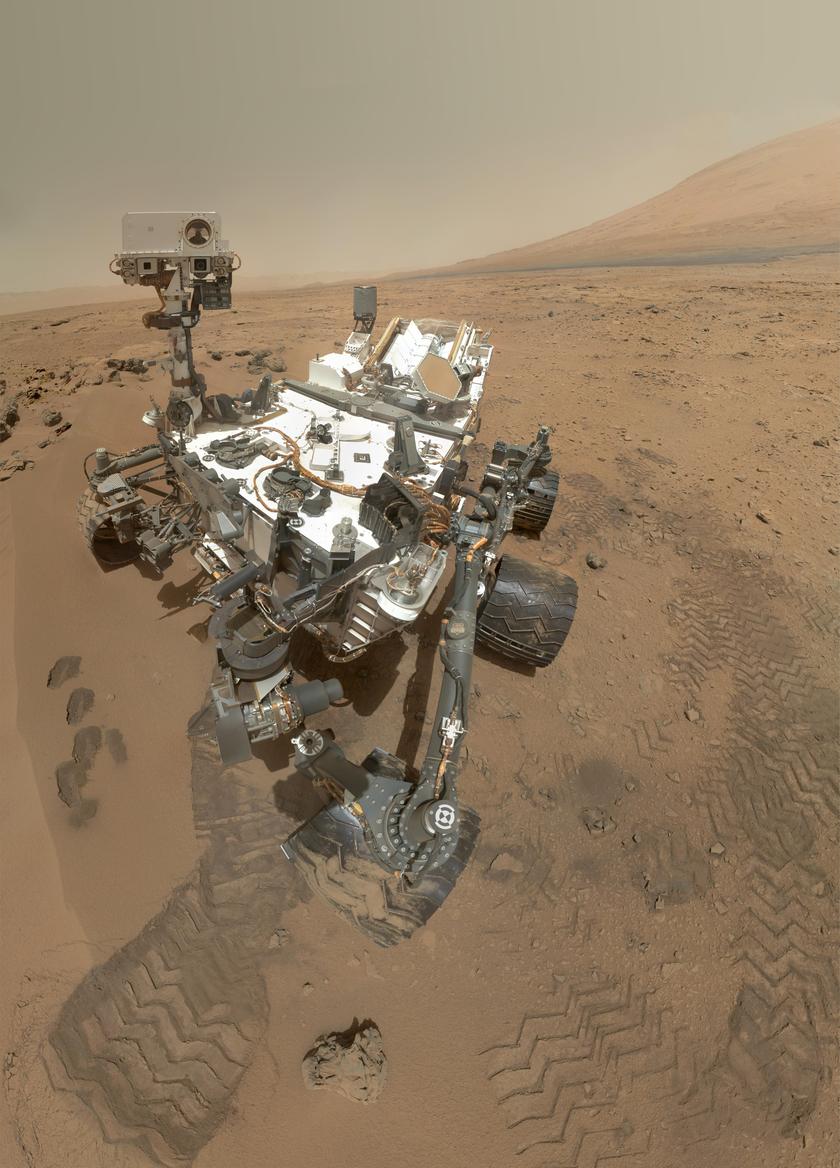 An amazing color self-portrait photo of Curiosity standing on Mars, on sol 84 (October 31, 2012). The photo is a mosaic of images shot with MAHLI, the camera on the end of the robotic arm. Although MAHLI is mostly intended as a tool for viewing soil and rocks up close at microscopic resolution, it can focus out to infinity so can be used to photograph things at any distance.

Enlarge it, seriously, it's worth it.

This is the second version of this image that JPL has released today. The first was this thumbnail version. Notice something different about it, other than the lower resolution? 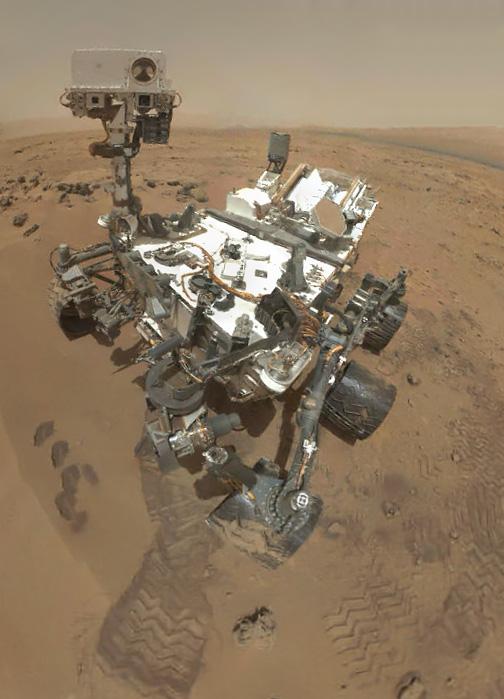 The two versions reflect different compromises made in the challenge of representing a three-dimensional world on a two-dimensional screen. No matter how you try it, there's going to be some kind of distortion. The bottom (thumbnail) version does a better job of representing the rover at a constant scale -- the wheel that is closest to you appears larger than the back wheels, but it's larger by the amount that it might look larger to you if you were standing there. In the top image, the closest wheel is really distorted and big. But, on the other hand, the top image does a better job of showing the landscape, with the horizon flat and the mountain rising behind the rover. The bottom version has a significantly curved horizon. For a variety of other approaches at dealing with this projection issue, visit the thread dedicated to this image at unmannedspaceflight.com. 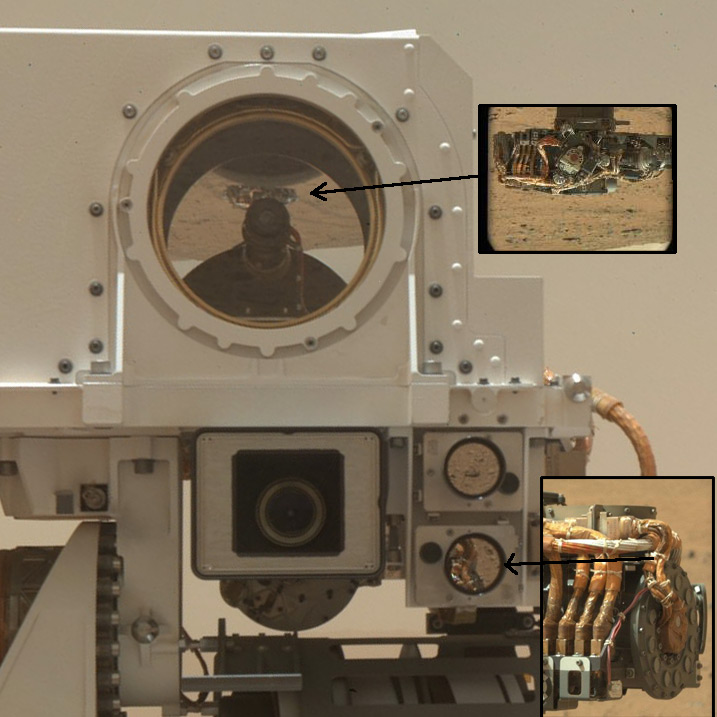 MAHLI images itself imaging the rover

And they're not done yet. On sol 85, they took a second complete self-portrait at a slightly different angle. That means they have this color portrait in 3D! Producing a 3D image is going to be really challenging because of the projection issue. Here's Stuart Atkinson's first attempt at it, using the thumbnail images that have come down so far. Stay tuned for more!

Hi Ms Emily, That is one beautiful self portrait of Curiosity from a distance planet. I am kind of confuse still as to how Curiosity can snap a self portrait without having its arm at least extended out of the picture frame. Would appreciate very much if you can enlighten me. Thank you in advance.

blindspot: The camera actually has a relatively narrow field of view, so this picture is actually stitched together from a number of smaller pictures. The camera, and quite likely the arm, is actually moving between when these pictures were taken (there's more than one way for the arm to position the camera in the same spot). Notice though that where the arm connects to the rover (up and to the left of the closest wheel) there is a tactfully grayed-out spot.

Hello Emily, I really enjoy reading your blog. I noticed that if you zoom into the high resolution version of the self portrait (available on the NASA website) the wheels all seem to have some interesting dents in them. I don't mean the JPL Morse code holes. The wheels have actual small dents in them. Do you think this was caused by the fall when it was released or back scatter from the jets used to slow its descent?

When zooming in on the top image, what would make the rocks to the left of the camera (very left, middle of image) to be mossy green in appearance?

killedthecat: Neither, actually, the dents have been accumulating as she rolls over sharp rocks.

It looks like in the distance Curiosity is coming up on an interstate, are u sure they are on Mars or lost in California? just kidding, just having some fun with you Emily..its the weekend. Go Gators and Go Curiosity!

Is the 'ridge' that is visible from the central mountain to the far left edge of the picture part of Gale's crater rim? if so, how far from curiosity?

Dents in the wheel from rolling over sharp rocks -- Does that mean the wheel might wear out?