The second day of the 2012 Division of Planetary Sciences meeting was nearly as full as the first. The biggest astronomy news of the day didn't come out of the DPS meeting, though. It was revealed (through the break of an embargo) that there is an Earth-mass planet in the Alpha Centauri system, both the lightest and the nearest planet ever found. It's in a scorching-hot three-day orbit but where there's one planet, we're finding, there's likely more. Pretty much every astronomy writer has something on this; I suggest Lee Billings' article for Centauri Dreams as well as an earlier article he wrote on the hunt for Earths in Alpha Centauri.

I sat in Titan sessions in the morning, in a press briefing covering Mars' climate, Titan lakes, and New Horizons at lunch, and in the Vesta session in the afternoon. My notes from the first few Titan talks are poor because I was having computer difficulties.

Priyanka Sharma spoke about the surface roughness of Titan, showing it to be smoother near the equator than in higher latitudes, though the trend didn't seem strong and I wondered if it was statistically different from a random distribution.

Roger Clark gave his latest update on what Cassini VIMS can glean about the surface composition of Titan from the little spectral information that can be glimpsed through the "windows" of the infrared spectrum at which methane is transparent. This is fiendishly difficult work, and has been a continuous project since Cassini first arrived at Saturn. It's easier to tell what the surface is not composed of than what it is. Clark said that Titan's surface does not have abundant water ice. Tholins (organic gunk) are "not a good match." It's not carbon dioxide. He can, he said, reject hundreds of compounds as not being compatible with the spectra. Things that are compatible include aromatic hydrocarbons (that is, organic molecules containing carbon rings, as opposed to aliphatic or long-chain hydrocarbons), as well as materials containing nitrogen-hydrogen bonds. These include such interesting compounds as benzene, uracil, coronene, and cyanoacetylene. Uracil should make your ears perk up: it's an RNA nucleotide. All of this stuff is "prebiotic" organic compounds. This presentation is not the end of the story; Clark and his team must continue to investigate spectra of all kinds of organic materials to find better fits.

Anezina Solomonidou investigated three regions on Titan thought to have shown changes in VIMS appearance over the Cassini mission. She didn't see strong changes at Hotei, but did see changes at Tui and Sotra, which was interesting. In her conclusions she assumed these changes were a result of cryovolcanic activity, but it wasn't clear to me what her justification for that was (as opposed to, say, weather).

Rosaly Lopes gave a fun (as always, with her) presentation on a "hot cross bun" on Titan. There was a JPL press release about this yesterday. She saw in radar a topographic rise whose peak was cut by two orthogonal cracks (geologists call them graben), pretty much a telltale sign that something pushed up below, domed the crust upward, stretched it, and cracked it. She made a case that this was a laccolith, which is where magma rises from below but does not make it to the surface, instead getting trapped in a magma chamber that pushes out the surface as it fills. Rosaly said that her colleague Ellen Stofan said it looked like Kunapipi Mons on Venus, which is, in fact, not a laccolith, but a volcano with extrusive volcanic flows. Rosaly acknowledged that while the features were suggestive in the radar imagery, there is as yet no confirming data, such as altimetric information. If the identification as a "hot cross bun" seems a little silly, let me assure you that there's reasoning behind it. Although it looks like it could be a laccolith, we don't know if it is one yet. To call it a laccolith without being sure that's what it is would muddy the scientific waters, assuming a conclusion without fairly considering alternatives. To call it a "hot cross bun" is deliberately intended to make some statement about it appearing like a feature that may have formed due to the upwelling of material inside (it's steam inside a hot cross bun that makes one of those crack), without asserting with insufficient proof that it is this geologic feature called a laccolith.

Radar images of northern Titan have revealed a feature shaped like a hot cross bun (left) that bears a striking resemblance to a similar feature on Venus (right). The image is from a Titan flyby on 22 May 2012.

Ellen Stofan's presentation was on Titan's lakes. Specifically, she compared Titan's north polar terrain to its south polar terrain, and the well-known fact that Titan's north pole has many more lakes than the south does. Ellen asked whether the south may once have looked like the north, at a time about 50,000 years ago when climate modeling shows the south would have been wetter and the north drier. She looked for evidence of dry lakebeds in the south. She made a good case for the south's only large lake, Ontario Lacus, being a remnant of an originally much larger lake, which she called Ontario Mare. A second, large region to the north of Ontario also is a strong candidate for a dry seabed. What makes this exciting, she pointed out, is that if Ontario is the remnant of a lake that existed 50,000 years ago, then it has been collecting prebiotic organic material and holding it in a liquid soup for at least that long and likely much longer, 100,000 years or more. 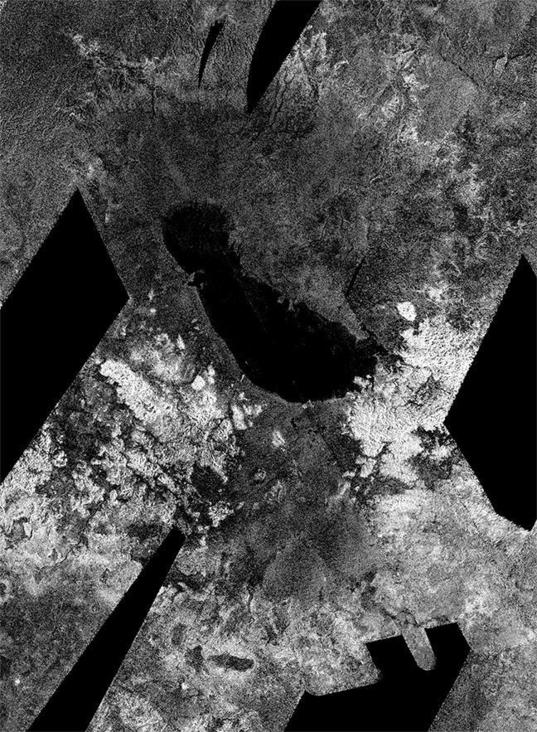 The black footprint of Ontario Lacus lies within a region that once contained a much larger ancient southern sea. 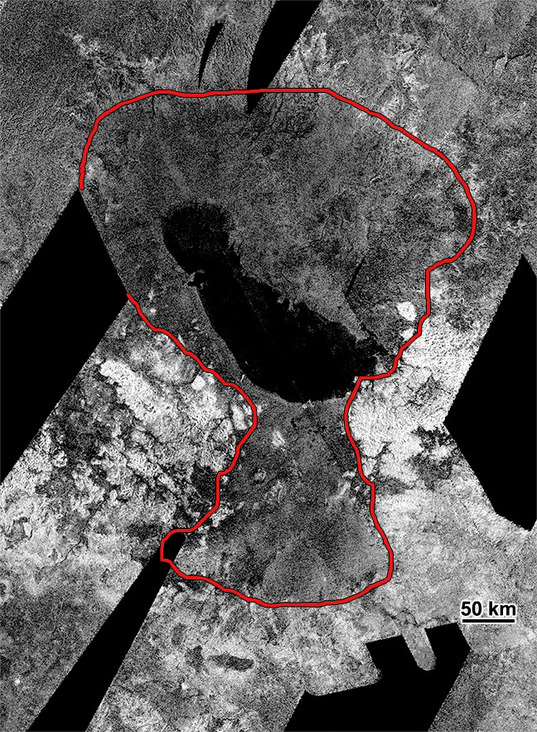 The red outline shows the putative boundary of an ancient, much larger sea, of which Ontario Lacus is only a remnant.

Ralph Lorenz was up next, giving a presentation on a northern sea, Ligeia Mare, that would have been a triumphant one...had the Titan Mare Explorer (TiME) been the selected Discovery mission. Ralph did a very good job of not appearing too bitter about losing out to the safer but far less thrilling InSIGHT mission. He compared radar views of Ligeia across four different swaths, looking for changes in shoreline over the Cassini mission and not finding any at the resolution of the radar imagery. He offered advice to the crowd on interpreting radar data, warning that the radar incidence angle (the direction from which a scene appears to be sunlit) can differ greatly even within the same radar swath, both along and across the radar ground track. He and Rosaly both showed beautiful "de-noised" radar data; I hope we'll get to see most of the radar data set de-noised some day.

I ran out of time to write about the afternoon sessions -- I have to run to today's sessions on Io, Pluto, MESSENGER, and Curiosity!

Emily, Thanks for these updates. I'm following you on twitter, but it's often hard to understand what you're relaying, given the limitations of the medium. These more complete explanations do a great job of filling the gaps.

Interesting information on Titan. I think I read somewhere that the mean temperature was just above the melting point of liquid methane. But the temperature difference of the boiling point and the freezing point is much lower, about 20 K, than that of water here on Earth. So one would expect lakes to be much more volatile on Titan. You could ask if anyone has done a study on solutes and their effects on boiling and melting points there.

Thanks for the great report Emily! It is easy to comprehend what you are explaining. Also I like z3's question (above blog). Could you please ask it to someone? The results would lead to better support or non-support of the RADAR returns.

You're welcome, Keith! It's tough to strike a good balance on Twitter coverage of conferences. My Tweets are intended as much for other scientists as they are for my own notetaking and public communication. It won't be possible for me to write about everything I tweeted about, but I'll do my best.