I think the statute of limitations is running out on my notes from last week's Division for Planetary Sciences meeting, so this is likely to be the last entry. One of the things that I look forward to at DPS is the latest reports from occultations of stars by small, faint objects. Occultations are one of those rare kinds of observations that produces an almost immediate ignorance-reduction payoff. Before you observe an occultation, you can know very well what an object's orbital path is, but you know very little about the object itself. You know how much light is reaching Earth from it, but that number doesn't offer very much of a constraint on the thing's nature. By timing its passage in front of a distant star, you get one measure of the distance across its disk. If you can do that for the same object crossing the same star with two telescopes separated in latitude, you get two chords across its disk. That is capable of constraining the object's size pretty tightly, and from that you learn how bright (or not) its surface is. It's not just a point of light anymore; it's a world, with a surface. 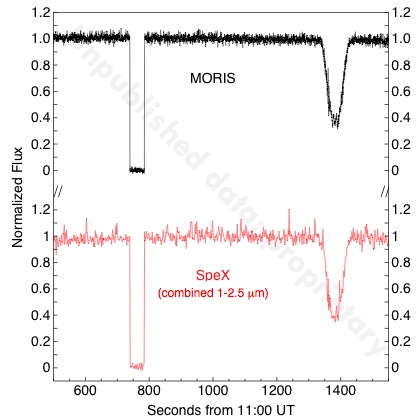 Lightcurve from the observation of the occultation at IRTF on Mauna Kea.

What you're seeing is an infrared lightcurve of the star's brightness as observed at NASA's Infrared Telescope Facility on Mauna Kea as first Charon and then Pluto passed by it. Charon is an icy, airless body, so as it passed across the star, the star winked sharply off and then on again, producing a steep-sided, square shape in the lightcurve. The wiggles at the bottom of the graph are a good measure of how much noise there is in the data (which is not very much). Pluto, on the other hand, has an atmosphere, so the star's light decreased gradually. At this particular location Pluto only grazed the star, so the starlight didn't actually dim completely; the star never got closer than 1259 kilometers from Pluto's center, which is nearly 100 kilometers above its surface. Even so, I think it's a really nice illustration of the substantial difference between the behavior of an airless and an airy world occulting a star. Note that the apparently noisy peaks in the Pluto part of the lightcurve are much higher than the noise in the bottom of the Charon lightcurve. Gulbis pointed these out and suggested they likely represent real features in the atmosphere, "some type of waves."

A couple of talks before Gulbis', Bruno Sicardy presented his data from the same double occultation. Sicardy had data from several observation sites, producing multiple chords across Pluto, including one particularly beautiful one where you can see a small central flash at Pluto (that's where the star passes almost directly behind Pluto and Pluto's atmosphere refracts the sunlight, focusing it a bit, increasing the apparent brightness). He reported Charon's orbit around Pluto to be circular at 19,575 plus or minus 10 kilometers, a result "fully consistent" with a number reported earlier this year by Marc Buie of 19,573 plus or minus 2. He didn't report diameter estimates for Pluto because that most beautiful occultation is also clearly not quite correctly timed with respect to others'; its chord is offset a little bit from the others. He said they have to "work out the timing issues" before he could present any specific results on Pluto.

Amanda Zangari presented a really interesting talk in which she analyzed numerous occultation studies of Pluto over the last 20 years to see what they said about Pluto's temperature. As on Earth, there are four main things that can affect Pluto's temperature: climate (season), time of day, albedo (reflectivity) of the surface, and latitude. She pointed out that because we always see Pluto at opposition, occultations happen at places on the atmosphere very close to sunrise or sunset. Where an occultation samples one limb at sunrise and one at sunset, you expect to see a temperature difference between the two, and indeed, she found as much as 18 degrees' temperature difference between the sunrise and sunset limbs on one particular occultation. One surprising thing she found in the data set: there are significantly more occultations that sample the sunrise limb than the sunset limb. "Be aware of the Pluto hemisphere and time of day when planning occultations," she suggested.

Please forgive a naive question. Why do we always see Pluto at opposition?

@Roger: Since the Earth never gets more than 1AU away from the Sun, and Pluto is never less than 30AU from the Sun, the angle between the Sun's "view" of Pluto and our own view is never more than arctan(1/30) = 1.9 degrees from face-on (opposition). We can never see the dark side from where we are, and this implies that the terminator (dark side-light side boundary) is always near the rim of the lighted face we can see.

Can someone please explain how Bruno Sicardy calculated the distance between Charon and Pluto (19,575km), including the error estimate (10km)? Perhaps the graph's time separation (roughly 750 seconds) and precision provide the key? What a remarkable measurement method! Thank you.

@tularosan: Pluto & Charon follow a very well-defined orbit around the sun so when you combine this with the orbit of Earth/moon you can accurately calculate their (collective) speeds across the sky and hence accurately convert time-of-occultation differences to a distance which they've moved - which is the physical separation between the two along the line of occultation (the star hasn't moved). Since the timing measurements have low error margins (fractions of a second vs a 750 second measurement), so does the separation (& hence orbital distance) estimates (a few km - about the same proportion of the measurement). Say for example that the time difference was known to 0.1 second (1 part in 7500) then the distance would be found to 1 part in 7500 or about 2.5 km (ignoring other sources of error).

Thank you, Scott, for your lucid explanation of the Pluto-Charon separation distance and error measurement. My fuzzy thought that the separation had somehow been inferred from the graph and Pluto-Earth distance alone left me perplexed. No longer! Including the two planets' orbital data now makes the procedure quite clear.