It's a quarterly feast day for me: the day that the Cassini mission delivers three months' worth of data to NASA's Planetary Data System. It falls on or about the first day of each quarter, but I always "celebrate" it several days later, when the Rings Node of the Planetary Data System has finished ingesting the camera data into its OPUS search engine. That happened early last week.

The Cassini mission is one of a very few that releases images in near-real-time to the Internet, so these are all images that I have seen before. Sort of. The data pushed out through the Cassini Raw Images page have been processed in a way that makes them easier to browse but much harder to do really good image processing work with. They have had an automatic contrast stretch applied, which makes features easy to spot but which washes out highlights and blackens shadows. And they have been strongly JPEG-compressed, which makes them really quick to download, but which mungs up detail.

So opening each quarter's PDS release is like seeing a whole new data set. The archival data is stored in 16-bit depth, giving full rein to the wonderful range of highlights and shadows in the Saturn system. And they're not compressed at all (though Cassini may have applied some lossy compression to some of them before downlinking, to save bandwidth).

I browsed through the latest data release late last week; it includes 3,339 photos. You can browse it too. There are lots of what I regard as "goodies" in this release, because during the three months that it covers (October 1 to December 31, 2011), Cassini was orbiting in Saturn's ring plane, which meant lots of encounters with icy moons, particularly Enceladus. One of the greatest things about the Rings Node's search tool is that you can tick checkboxes under each image you like as you browse, an when you're done, you just go to the "cart" and can grab a ZIP file containing everything you liked (which, for me, was about 350 images).

I'll never have time to process everything. So here are three highlights: 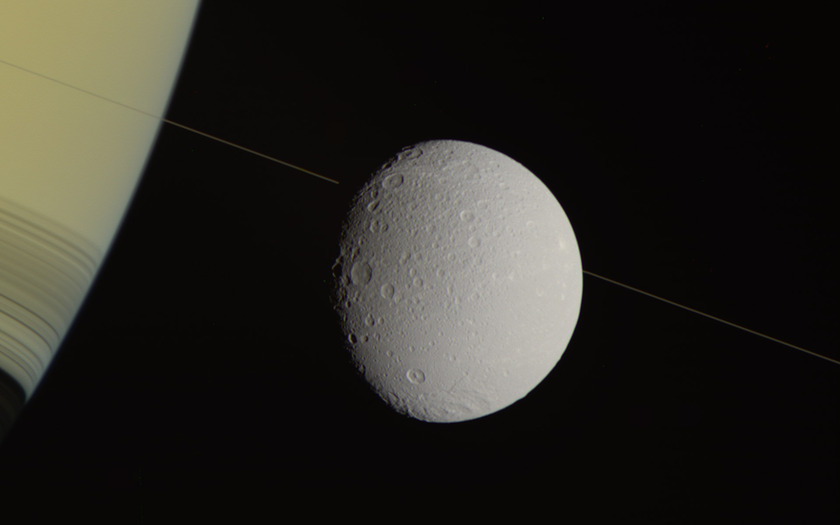 Dione and Saturn and an almost invisible ring

An infrared-green-violet approximate true-color composite of Dione poised in front of Saturn on 12 December 2011. Cassini is almost precisely in the ring plane, so the rings are vanishingly thin.

With its brownish cast, Dione is the most colorful of Saturn's mid-sized icy moons. I was particularly taken by this pairing because of the incredibly thin line made by the entire ring system across the image. 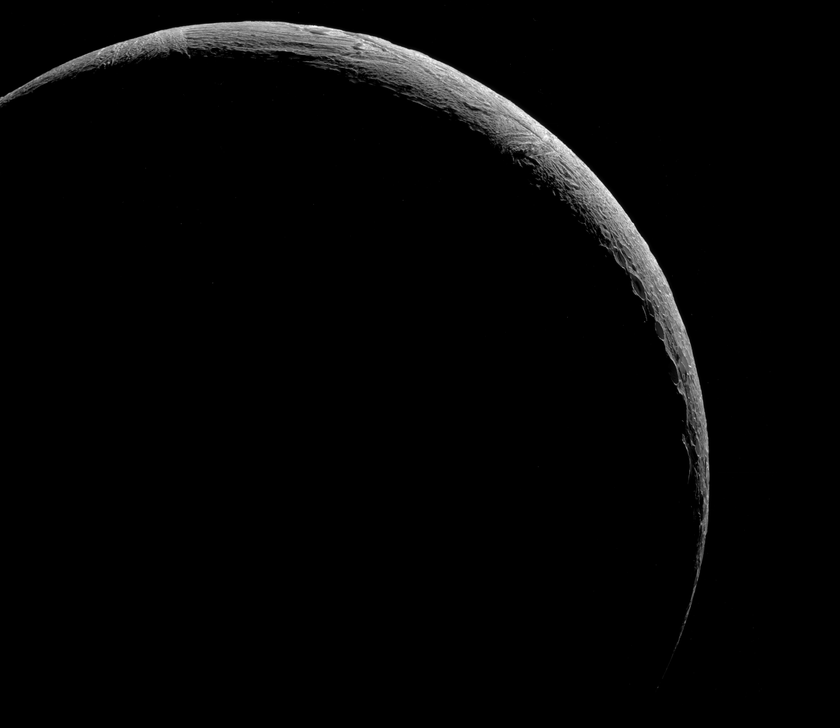 A five-footprint mosaic of an extremely thin crescent Enceladus taken on 19 October 2011.

This animation consists of 13 images of Dione taken about twice per hour over a period of six hours. Over that time, Dione's "wispy terrain" -- now known to be networks of crisp fractures in Dione's icy crust -- passes from day into night, and the long shadows caused by the low sun at the dusk terminator trace the topography of the fractures.

There are lots more cool sequences, but that's all the time I had. If you try your hand at processing some of these, please upload your efforts to this website and I'll feature some of them on a future blog entry!

WOW! Impressive! Thanks!!! I like the movie strip. Great rotational imaging!

This is why I get every day. It makes me feel at once so small and so connected to the larger universe.