Well, this is a first, as far as I know. And unexpectedly stirring. The image below looks blank at first, a solid greenish gray. But let it fill your screen, and look in the upper right quadrant, and you'll see a bright smudge. At first, the smudge seems familiar: it's a crescent Moon, not quite lost in the bright western sky, just after sunset. But look closer at the shape of the Moon and you'll see it's all wrong: its limb isn't hemispherical, it's lumpy; and the terminator (the day-night boundary crossing the Moon's disk) is even lumpier, turning the crescent into an apostrophe. 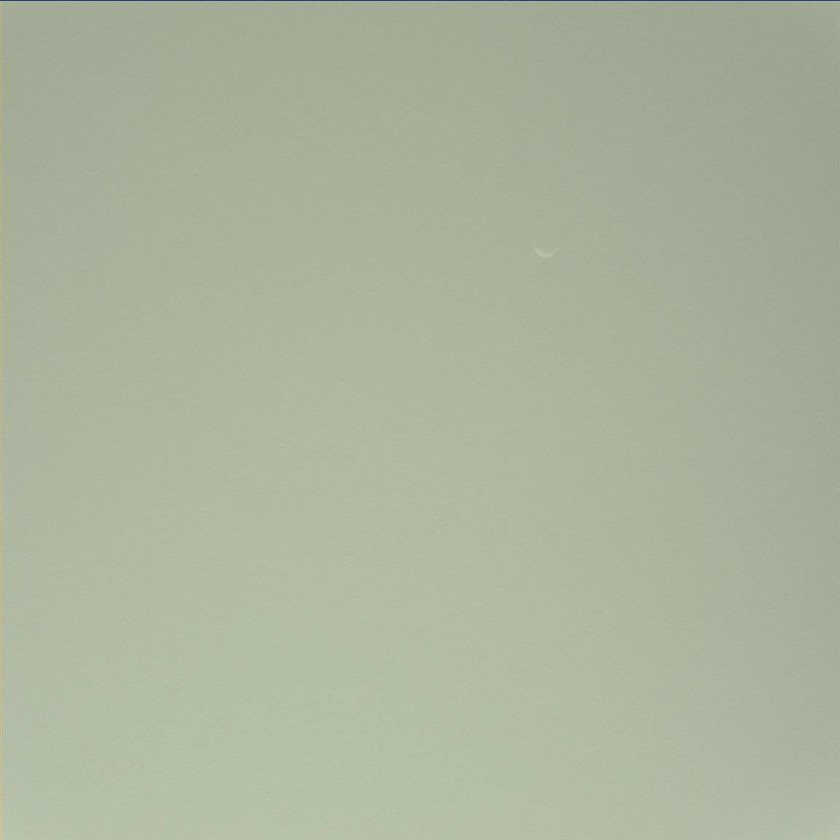 Just after sunset local solar time, Curiosity turned its narrow-angle Mastcam-100 toward the sky to image a crescent Phobos. This version is a slightly processed version of a raw image (blemishes and hot pixels have been cleaned up); it will likely be replaced later with an official release.

Here's a zoomed-in view. You can't do much to the contrast of this image without bringing out JPEG artifacts; I am hopeful that the press briefing scheduled for Thursday at 11:00 PDT / 18:00 UTC will include an official release of a less-compressed version of the image. But the lumpy shape of Phobos is quite clear. The shape even looks familiar; you could talk me into the notion that north is to the left and that the flat bit of the limb to the right is the great gouge of Stickney crater. But I'm not at all sure of the geometry here, so don't quote me on that! It's tempting to think that a little divot near the terminator on the left side is a crater, but I don't trust such small details among the JPEG artifacts; I await an official release to comment on whether anything other than the basic lumpiness of the limb is visible here. 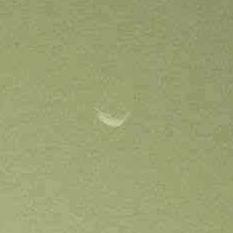 Zoom in to Curiosity image of Phobos, sol 45

Contrast has been adjusted slightly to bring out a bit more detail. This version will likely be replaced later with an official release.

Think about this for a moment -- we're seeing a different moon from the surface of a different world. And this moon is weird not just for its lumpiness, but also because it orbits so close to Mars that it outpaces Mars' rotation. That means it rises in the west and sets in the east, more than twice every Martian day. Completely alien. And awesome, in the literal sense of the world.

I would not have noticed this image were it not for the ever-watchful members of unmannedspaceflight.com (user "fredk" this time). I'm so grateful for that community. We're running a fundraiser right now to support our hosting costs -- if you, too, value the beautiful images and constant attentiveness of this community of volunteers and amateurs, please consider making a donation to support it.

Beautiful! One thing though: at least according to eyes on the solar system, 13:27 UTC is more like dusk for curiosity that day. I thought perhaps it was a somewhat longer exposure. I went there looking to see if I could identify any features: no dice, but I did get an appreciation for just how thin a phase this actually is. I can't wait until they get some full-phase pics!

Looking forward to a button Phobos myself. Emily, do you still have your paper Phobos model?

For everyone else, I'm referring to this one: http://www.planetary.org/blogs/emily-lakdawalla/2008/1348.html

@ethanol you're right; I had plugged the wrong time of day from a different image into Mars24. The geometry makes much more sense now! Thanks.

While this is already an awesome pic, imagine if Fobos-Grunt managed to safely make its way to Phobos before this shot was taken. A spacecraft looking up into the sky and photographing a celestial object that also has a spacecraft on its surface... That's space exploration for ya!

How about a view of the evening or morning "double star"...the Earth and Moon ? Also if we could see a picture of Jupiter in the night sky,we might be able to see it's moons? That would make Galileo happy and less of an heritic ?

John Carter raises his sword to Thuria, the greater moon, as he rides his thoat across the dry seas under the moons of Mars.