A 3D photo album of Endeavour at Edwards Air Force Base

I drove up to Edwards Air Force Base today to see the shuttle carrier aircraft NASA 905 carry in the space shuttle Endeavour, which will be delivered to Los Angeles tomorrow. I and the other hundred or so media were parked on a dirt access road parallel to the main runway for a couple of hours before the shuttle arrived. In the meantime, we were treated to a pretty nice air show: touch-and-gos by T-38s, takeoffs and landings of F-16s, F-18s, a C-130, and an F-22. And a distant sighting of a B-1.

But the main event was, of course, the arrival of the big 747 airplane with the Shuttle stacked on top. The landing of NASA's C-9 Pathfinder indicated that NASA 905's arrival was imminent; the plane came in slowly, slowly from the east, a dark dot with occasional glints. Suddenly, it became a white shape as it banked to turn and fly low over the air force base, giving all its residents a good view.

My feelings upon seeing it were complicated. First and foremost, it's cool: a thing that has actually been to space and back, and it's being carried by a jumbo jet that once actually saw passenger service (this one began its life with an American Airlines paint job and came to NASA in 1974). The Shuttle is not all that much smaller than the 747; it seems crazy that a regular old passenger airplane, even a modified one, can carry the not-particularly-airworthy Shuttle on its back.

I know that a lot of you readers and Twitter followers are sad about the end of the Shuttle program, but that was one thing I wasn't really dwelling on as I watched NASA 905 carry Endeavour across Edwards. To me this is a ship that's served her mission well and now has reached that mission's end; the thing to be sad about is the fact that we don't even really know what the next mission is, nevermind having a ship that can take us there.

I wasn't dwelling on the end of Endeavour's mission, but I was struck by the number of other aircraft involved in Endeavour's cross-country journey. It wasn't just NASA 905; there was a T-38 chase plane, and one I think that came in way ahead. There was the C-9 pathfinder, and there were a couple of F-18s flying around, shooting in-air video. All of these painted white with blue stripes and the NASA logo. I learned today that NASA 905 and its sister, NASA 911, which will after tomorrow have no more Shuttles to ferry, are going to be used by the SOFIA program -- for spare parts. Although it's nice to know that they'll be of some further use, it's sad that these and likely many other perfectly good NASA aircraft will end their careers with the end of the Shuttle program. Just like many of the people involved in the Shuttle program. We SO need a new mission. One that won't change every four years. One that we can plan, and build, and accomplish, just as we did Apollo and the Space Station.

Anyway. All this was roiling in my head as I watched NASA 905 turn in the west and then return to the eastern end of the runway. I took a few pictures on approach but knew that nearly every other person parked on that road was a better photographer with better equipment than mine, so once it got close I put down my camera and just watched. But at the moment of touchdown, that escort F-18 zoomed straight over our heads, running along that access road at such a low altitude that I couldn't not look up -- I'm no good judge of distance but it seems like it couldn't have been more than a hundred feet up -- and after the sharp scream of the F-18's engine roar had set my heart palpitating I realized I was supposed to be watching the Shuttle land, not analyzing the surprisingly dirty underside of a more pedestrian fighter jet, but NASA 905 was already on the ground and rolling past me. With the Shuttle on its back. And then it was at the end of the runway, turning and taxiing toward the Dryden Flight Research Center, on the far side of the runway from us.

Fortunately, I got my chance to really look at the plane and the Shuttle there at Dryden an hour or so later. You can find a lot of good photos of the landing and of the plane and Shuttle really all over the Internet; mine wouldn't improve on those. But I think I was the only one there with a 3D camera. So go get your 3D glasses: these are all red-blue anaglyphs. 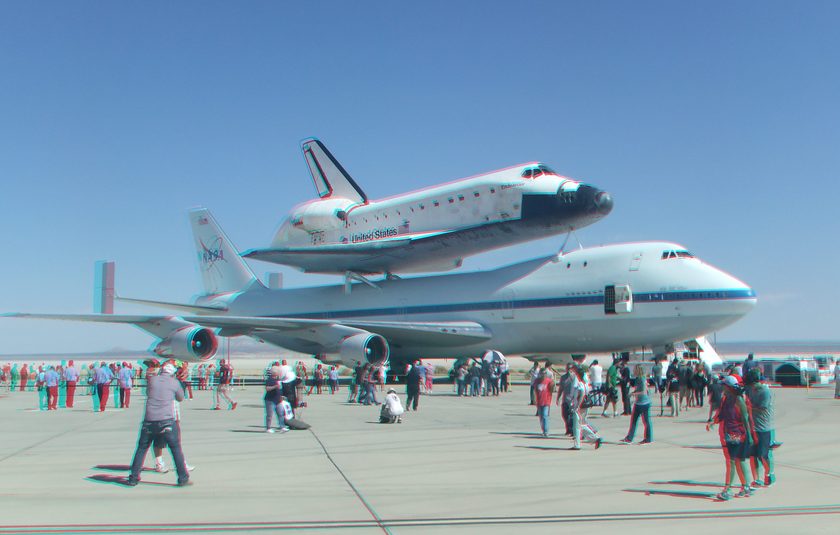 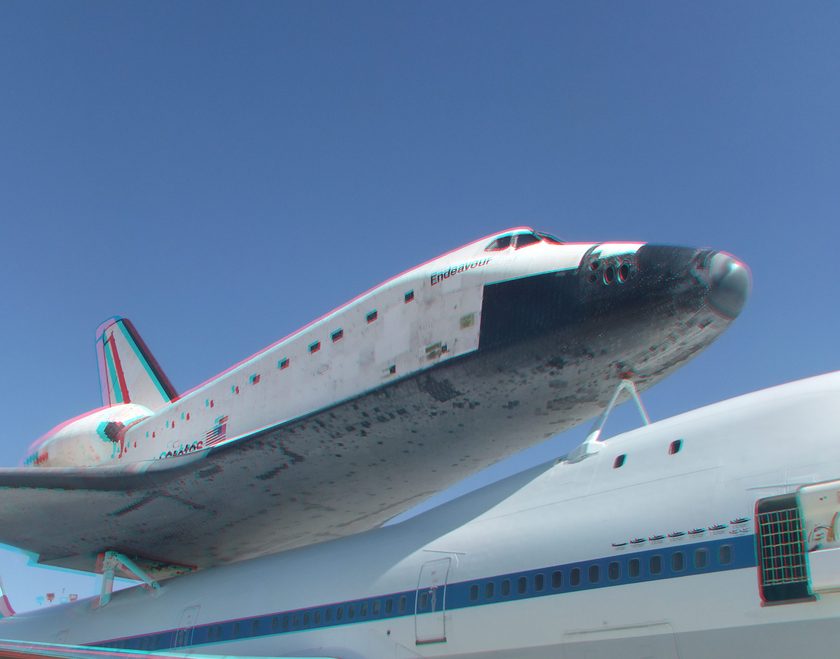 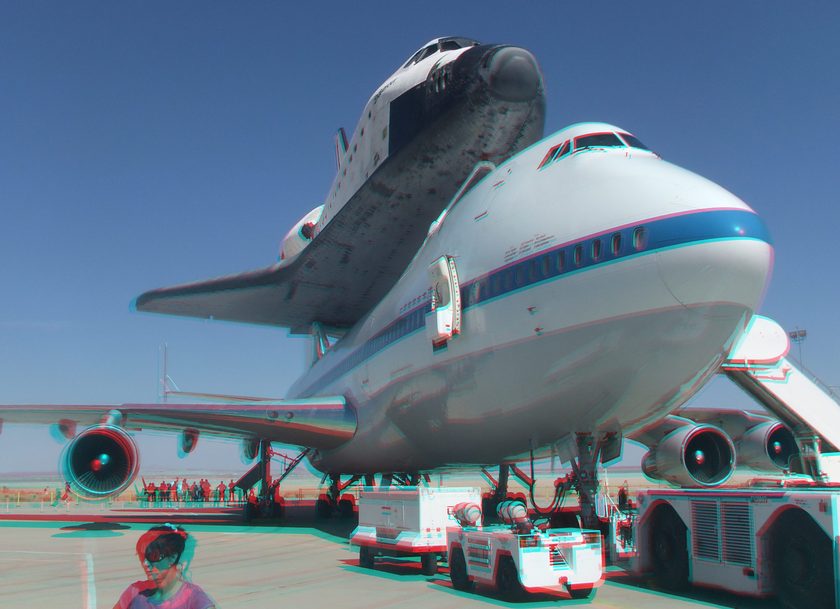 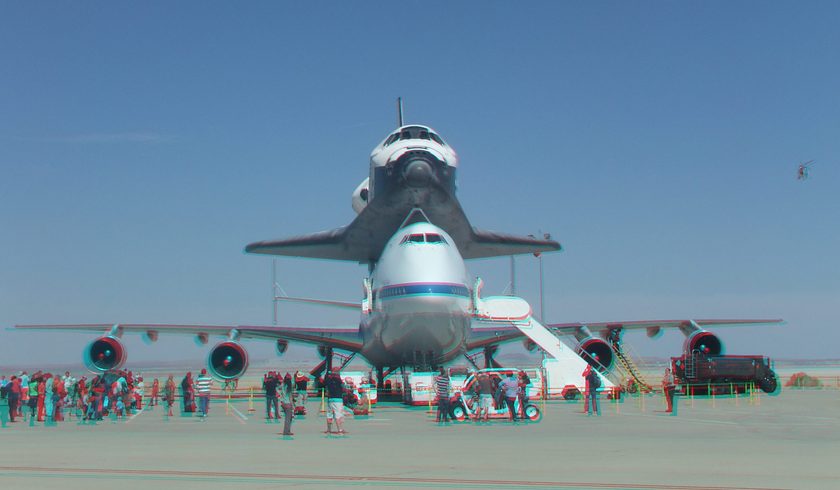 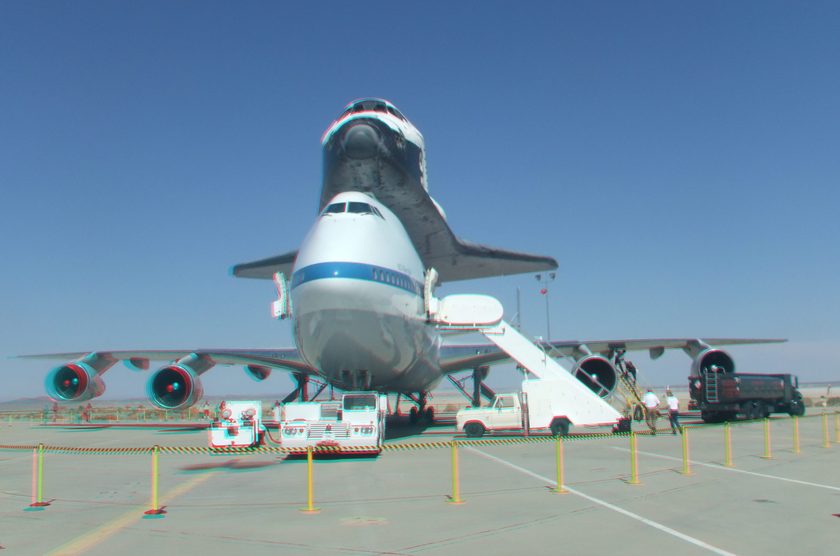 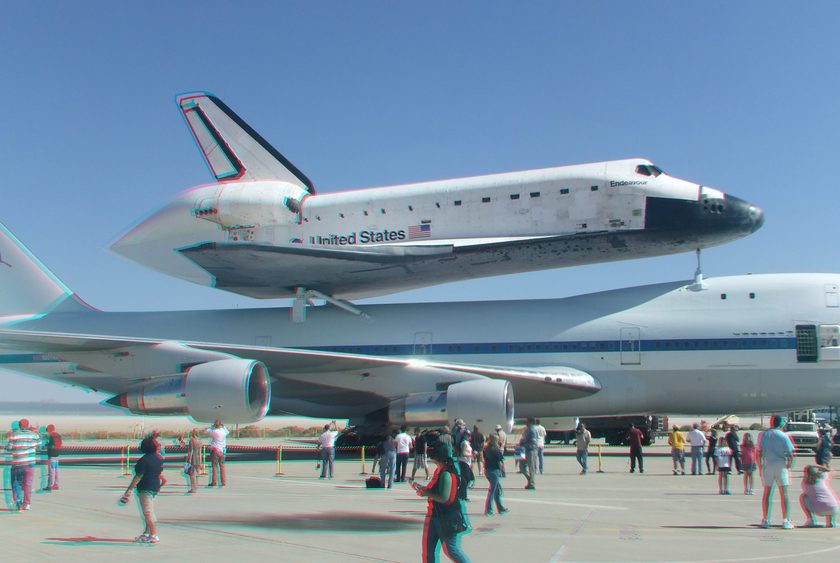 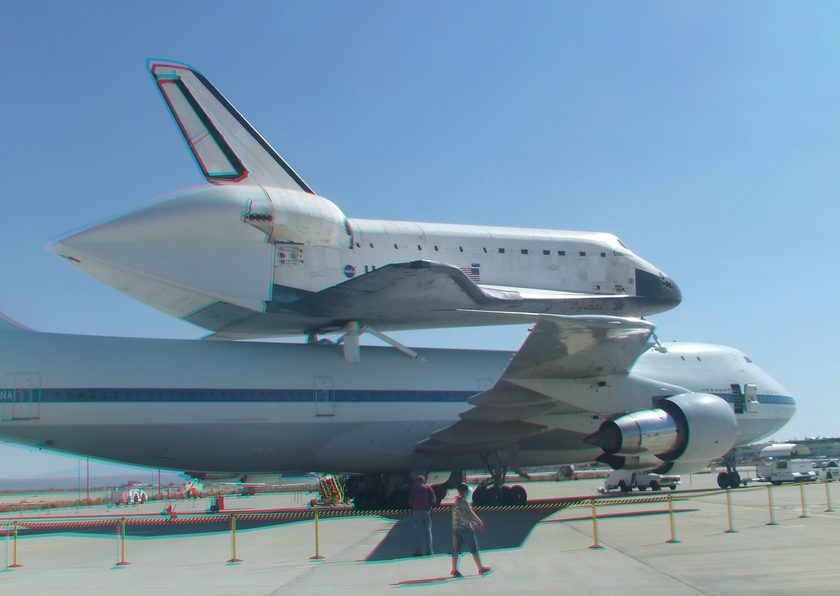 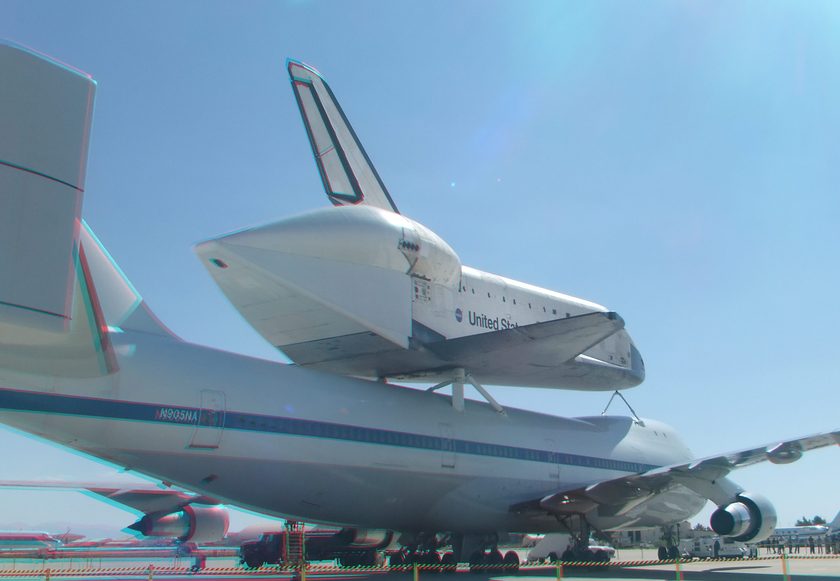 Here's me with the Shuttle and Shuttle Carrier Aircraft: 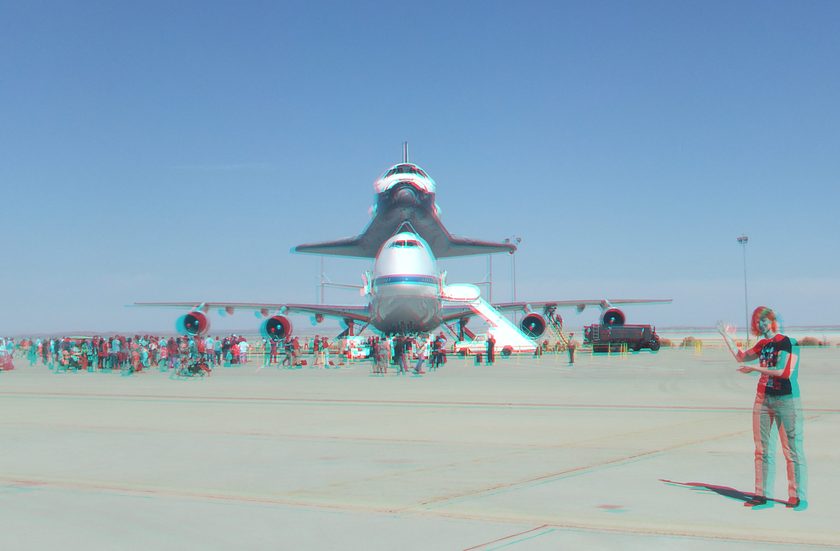 Later in the day I had the chance to see some other hardware -- but I'll save my post on that for tomorrow; I'm tired and sunburned and I've had enough of the slow motel Internet. I have to be at Edwards at 5 am tomorrow in order to watch the aircraft take off, and then I'll return to Los Angeles. I haven't decided where I'll try to view the Shuttle from in L.A. At this moment I am leaning toward "viewing" it from my home office. It'll really be hard to beat being right here, having a literally once-in-a-lifetime chance to see the last Shuttle embark on its last flight.

Now that I write that, I'm sad.

I was born in 1979, which makes me about the same age as the space shuttle. To me, as a kid, the space shuttle WAS the space program. I watched the launches on television, poured over picture books about the shuttle, learned all the acronyms (SRBs and SSMEs and GPUs and MMUs), and even - sort of - got to fly the thing, at space camp where I got to be the commander of a big mock mission in the shuttle simulator. To a 10 year old kid the space shuttle was pure cool. And I loved to imagine the even more amazing spacecraft we would be sending into space by the time I was an adult. It's pretty hard to imagine all the expertise and infrastructure we have built up in manned spaceflight over 50 years now withering away without the vision, funding and political will to do something bigger. But - ok, trying not to get sad here, 30 years was a great run for the shuttle, and its nice to see the remaining orbiters going to good homes where people will be able to come see them - Enterprise in NYC, Discovery at Dulles, Atlantis at Kennedy, and now Endeavour here in LA. I've still never seen a real one in person, so I can't wait till it's all settled in and open to the public.

Wow! That was great! Saw the Shuttle Endeavor fly by about 2 hours ago on its way down to Southern California. It looked kind of like a whale with its baby (the shuttle) on back! The end of an era.

Emily, will you please share with us what make and model your 3D camera is?

I still have my shuttle launch (STS-38) video; the ripping sound of those main engines is so cool. I wish I had been young enough to hear Saturn IV F-1s go off but the Shuttle experience is irreplaceable. It's too bad that these airframes still have quite a few flights left; the body is willing but the mind apparently isn't. Sure hope NASA gets a proper set of missions together for a long period (12-16 years?).

@Kit: It's a Fujifilm FinePix 3D camera. As a camera, it's not as good as my basic Canon SureShot -- it's slow, and performs poorly under low light conditions. But it is SO fun to have 3D capability for both stills and video, I'm willing to take a hit in photo quality to have the "being there" sense I get when viewing images in 3D.

Emily - Great photos! Here's an idea: sell copies of those and give the proceeds to Laser Bees or something space wise. bee - I was at the Apollo-12 launch. The Saturn V booster (five F-1's) at launch sound like the old Boeing 727 pre-silencer model engine at full throttle. At 3.0 miles away you cannot hear the person standing 2 feet from you. The shockwave is a feeling that is indescribable.

sorry - wrong email on above entry. Emily - Great photos! Here's an idea: sell copies of those and give the proceeds to Laser Bees or something space wise. bee - I was at the Apollo-12 launch. The Saturn V booster (five F-1's) at launch sound like the old Boeing 727 pre-silencer model engine at full throttle. At 3.0 miles away you cannot hear the person standing 2 feet from you. The shockwave is a feeling that is indescribable.