Curiosity had a busy weekend and is now well on the way to Glenelg. The Navcam mosaic taken at the end of sol 38 had some intriguing looking rocks in it. So on sol 39 the team commanded Curiosity to take a set of photos. Drive-by geology is always somewhat dangerous, so I am not going to speculate about what kind of rock we're looking at or why it's broken and tilted the way that it is. But I will say that it looks an awful lot like broken paving concrete! Flat on top, gravel inside, dirt underneath. 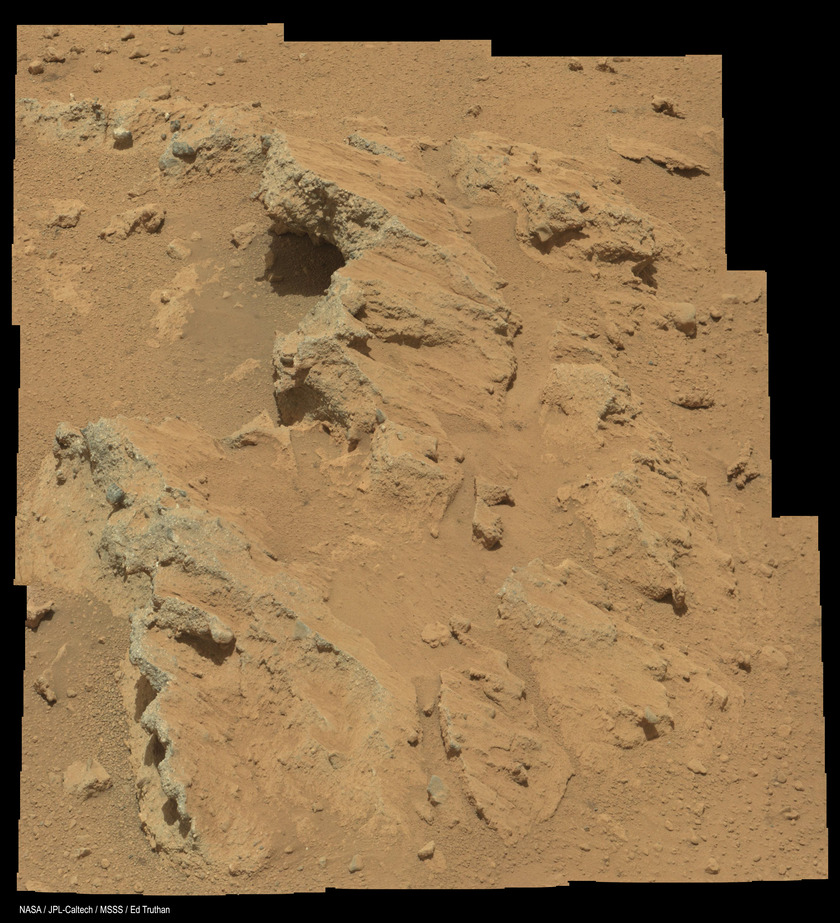 A nine-image color Mastcam-100 mosaic of some tilted blocks of rock seen by Curiosity during its drive to Glenelg, sol 39 (September 15, 2012).

It's a very interesting-looking rock formation -- but not interesting enough, apparently, for Curiosity to spend any more time on it. After taking these photos on sol 39, Curiosity drove onward. And onward again, on sol 41.

Beautiful composite. Drive-by geology is certainly risky, but can be fun. Two things I think are safe to say. 1-It sure looks like an outcropping of bedrock. 2-It's a breccia. One guess: I'll bet they'll see a lot more of this unit at Glenleg, where the windblown (presumably) sediment is not as thick.

Yeah that's where the Trans-Mars Canal Maintenance Road was. Ask John Carter about it. ;-)

It looks like the substratum exposed by the sky-crane rockets. The tilt might indicate slope has changed or the ground has shifted somehow. Deflation over long periods of time and new deposits might destabilize a slope. The fill material looks like a very fine sand with small pieces of a pulverized stone in it. It may have been compressed by older material above it that has eroded away. Cement suggests an interaction with water. Are there chemical reactions with CO2 that could act as a hardener? It be interesting to hear a geologist's report.

I believe they committed a crime not fully inspecting this feature along with the exposed face between Bradbury landing and the mountain. It is indicative of the very ground, (I suspect an eroded sedimentary fan?) they landed on. However, rummaging through rock types I presume (guess), this being a green rock with a grain is a schist. Does not make sense because it's definitely a sedimentary concrete! I hate to be a conspiracy theorist but an exposed section on the upper central section of the picture almost seems to have the form of a tube with the middle crystallised. Which seems to go in hand with so many of the rounded stones appearing like geodes. While it's my first post to this amazing resource I wonder if C14 and older dating methods exist in line with and are compatible with the Earth? Hope I made food for thought, thank you.