IKAROS is alive! (Or: oh me of little faith!)

I am rarely so glad to admit that I was wrong as when it's about the failure of a mission. In this month's "What's Up in the Solar System" blog entry, I speculated that IKAROS's mission was done. And now, not even two weeks later, the news comes that IKAROS has been heard from -- twice! -- on September 6 and 8, 2012.

With help from various followers on Twitter, and Google Translate, and Excite Web translate (which was, to my surprise, superior to Google's), here's my understanding of the situation:

If I am reading it correctly, they so far only have carrier signal -- which means no telemetry, no specific information on the state of the spacecraft -- but that the presence of the carrier signal indicates that IKAROS has awoken from hibernation. As JAXA has proven over and over again, making contact with your spacecraft is 90 percent of the battle.

If IKAROS is awake, then what? I'm actually not sure. It was a small, cheap, technology demonstration mission that proved several useful new technologies: solar sailing, ultralight solar cells, the steering of a solar sail using liquid crystal reflectors on the sails, and neato little deployable cameras for assessing the condition of a deep-space craft, among other things. I don't really know what it has left to prove. I don't know how long its primary mission was intended to last but I do know it is WAY beyond that intended lifetime.

No matter; it's a triumph that this little machine is still ticking, still talking to Earth. Once again, I find myself congratulating JAXA on a seemingly impossible spacecraft recovery. I'm sure their engineers would prefer a little less drama in their missions; but when drama exists, they handle it.

Wake up, IKAROSkun! Here's his current Twitter avatar, complete with slack-jawed sleep drool; I'm told via Twitter that his latest Tweet, "（．．ふにゃ？） ", is a noise one makes while talking in one's sleep (@mid382 tells me it's a sound like "funyaa"). Love it. 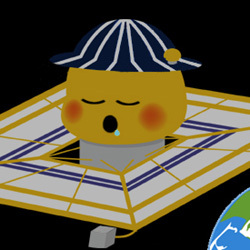