MAHLI is a beautiful, beautiful camera. So are the Mastcams, of course. But sol 34 is all about MAHLI.

Curiosity's Mars Hand Lens Imager (MAHLI) is located on the end of the robotic arm, along with another science instrument (APXS) and all the hardware that Curiosity will be using to try to get samples. I'll have more to say about those tomorrow (probably). Tonight, all I want to do is to post a couple of the photos that MAHLI took while obtaining a "belly panorama" -- a thorough look underneath the rover. 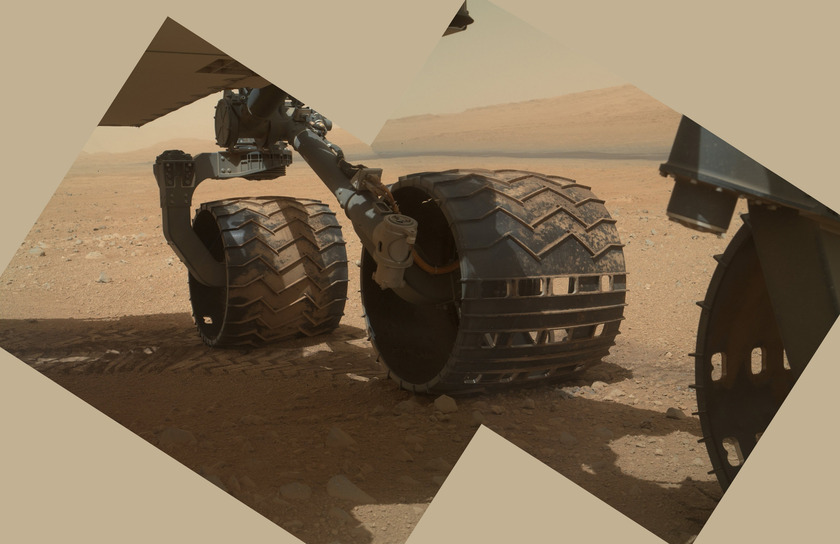 A mosaic of two images captured by Curiosity's Hand Lens Imager on sol 34 (September 10, 2012). The first "belly panorama" shows the wheels already to be coated with red Mars dust.

Those wheels are firmly planted on that rusty soil, and making tracks, even as the fine stuff sticks to the wheels. Notice how the rearmost wheel is slightly embedded, or maybe it shoved up a little bit of soil as it swiveled into place. Clearly Curiosity didn't drive straight to the position that she's in; she drove from the left, then did a turn in place to arrive at her current position.

Curiosity's facing west-ish; you can tell that because of the dark line in the distance, which is the black sand dunes that are at the foot of the mountain. And that's the eastern flank of the mountain rising above the dunes.

This camera -- and its sister instruments, the Mastcams -- have a unique clarity. They have twice as many pixels as Opportunity's. But there's this softness to the color, and a realism to their pictures that the raw photos from Opportunity -- as much as I love Opportunity -- lack. This color feels real; and the photos that the cameras take transport me to the surface of Mars with Curiosity.

Here's another favorite photo of mine from this sequence: 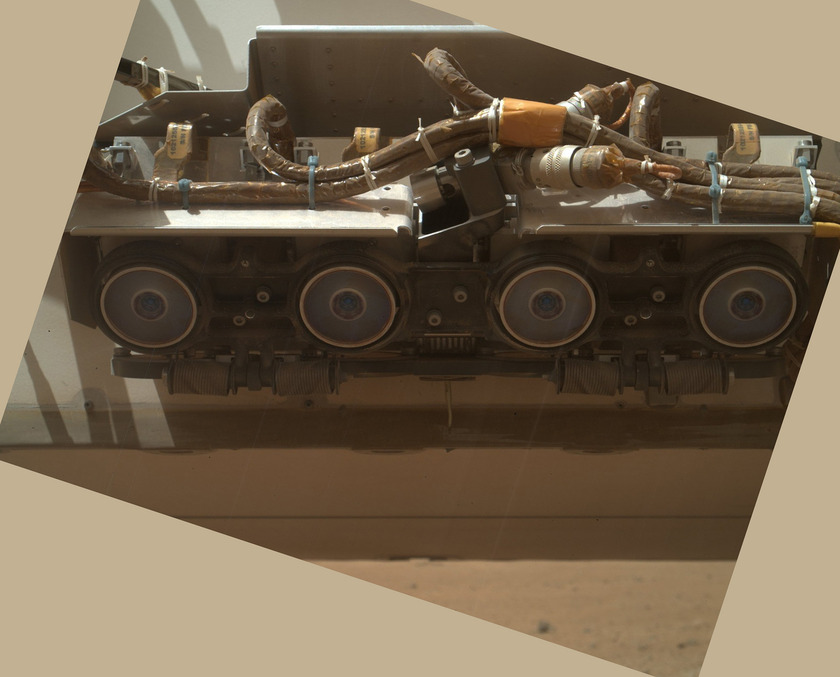 Those four blue eyes (yes, they really are blue; I'm not sure why even though I know Jim Bell explained it to me once) are responsible for Curiosity's safety as she drives. They survey the ground immediately in front of Curiosity's path, identifying hazards. But this photo is extra special to me because Curiosity's Hazcams are identical to the ones that Spirit and Opportunity carried to Mars (though those rovers had only one pair on each end rather than Curiosity's redundant two). We have never seen either Mars Exploration Rover's Hazcams on Mars; not even their shadows. Opportunity's definitely do not look this clean anymore, but still, they look just like this. And thinking about that brings home that Opportunity really also is working in an environment that has the same colors, and the same dust.

Check the raw images pages; there are beautiful photos of all the arm hardware. If I have time tomorrow I'll write more about that.

Agreed about the photo of the hazcams--something compelling about photos of eyes, even robotic ones. One thing, I think that the front hazcams used so far (the "A" pair) are the first and third from the left, not the left pair. That's according to http://www.lpi.usra.edu/meetings/lpsc2012/pdf/2828.pdf anyway. For some reason, according to that document, the sequence looking at the front hazcams is A-B-A-B while the sequence looking at the rear hazcams is A-A-B-B.

I don't see any dents on the wheels. Could the dents seem from the other pictures just be one one small patch...maybe from EDL?

Joe, thanks for that correction and especially for including the source!