Curiosity's much-anticipated self-portrait with the MAHLI camera just arrived on Earth, and even though it was shot through the dust cover it is AWESOME. Hi everybody, wish you were here!

But wait, I have a slightly better edited version: scroll down. 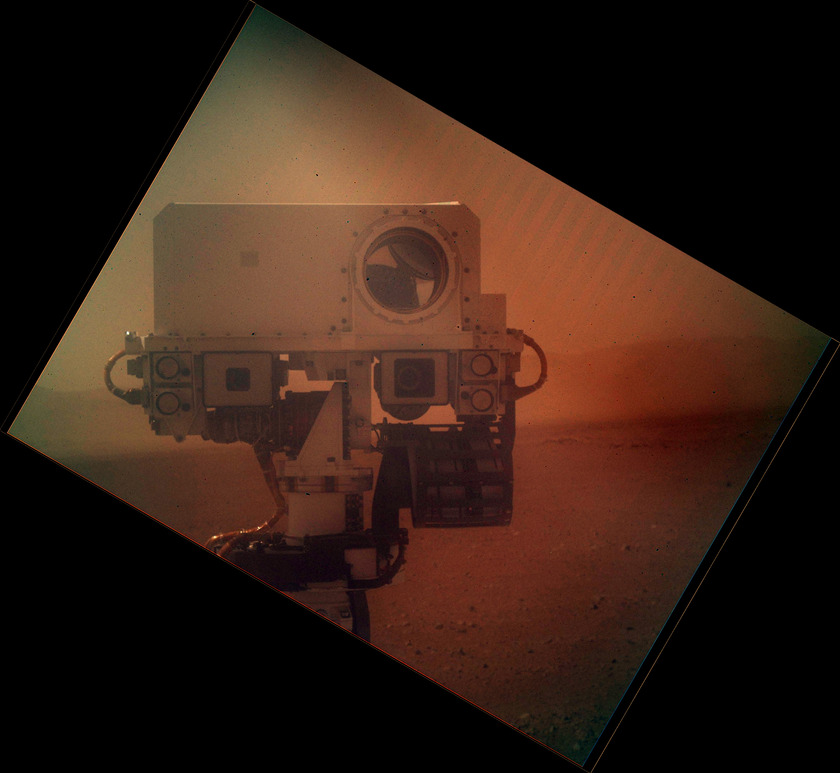 Curiosity used her MAHLI arm-mounted camera to take this photo of the top of her camera mast on sol 32 (September 8, 2012). The photo was shot through the MAHLI dust cover, which was, in fact, covered with dust during the landing. This version of the image has been rotated and had its contrast stretched to reveal more color. 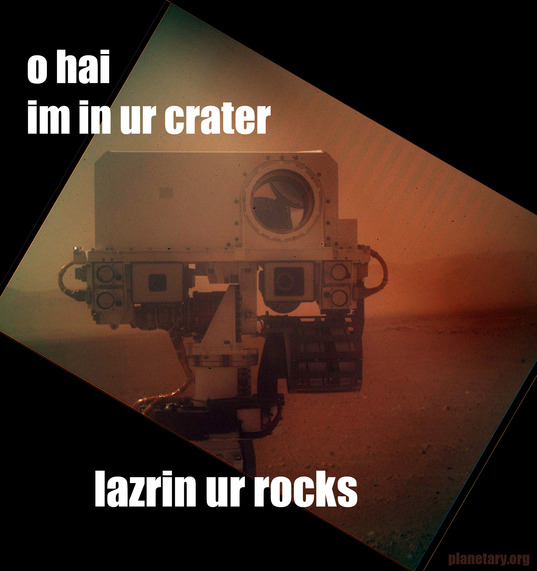 Silliness aside, this is such a wonderful photo. There she is: Curiosity is on Mars.

The image looks like it was taken through a colored lens because, well, it was. MAHLI has a dust cover, as you can see in the reverse angle of this photo, taken two sols ago: 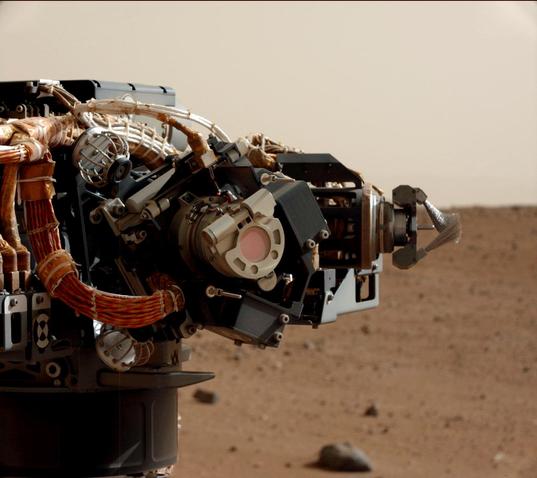 MAHLI is on Mars

Taken on sol 30, this photo was the first time that MAHLI was seen on Mars. Its lens cover is in place.

You can see the original unprocessed version of the MAHLI portrait of Curiosity's camera head here, and its taupe color shows you just how dusty the dust cover got. But if you crank the heck out of the contrast, as I did to the version of the image above, you can see how beautifully sharply in focus MAHLI is seeing Mars.

A late addition to this post: also just returned from sol 32 are several navcam photos showing arm checkouts, including another indication of MAHLI's health. In this little animation, MAHLI's LED lights flick on and off. Thanks to fredk at unmannedspaceflight.com for noticing MAHLI's "wink!"

And a super huge congratulations to Ken Edgett and Aileen Yingst of Malin Space Science Systems, PI and deputy PI on MAHLI. Successful operation of an instrument couldn't happen to a nicer pair of people.

I too enhanced this MAHLI image so I could see more clearly. Just rotating 90 degrees also works. It's a little more stylish. If you look closely you can see little black specks of dust sticking to the cover. I doubt they are CCD defects. The resolution is quite good and images without the cover should be much better.

** I meant to say rotating the enhanced image 180 degrees is more stylish. **