A week after Curiosity's landing, I thought it was time I spent some attention on a planetary body other than Mars! As Dawn is departing Vesta, the mission continues to release pretty pictures from the period that they spent relatively close to the asteroid. I think my favorite features on Vesta are its streaky craters. Today's image release shows one of the streakiest: Aelia, a little crater on the flank of a larger one, near Vesta's equator. (Check my cheat sheet to see other prominent named craters on Vesta.) 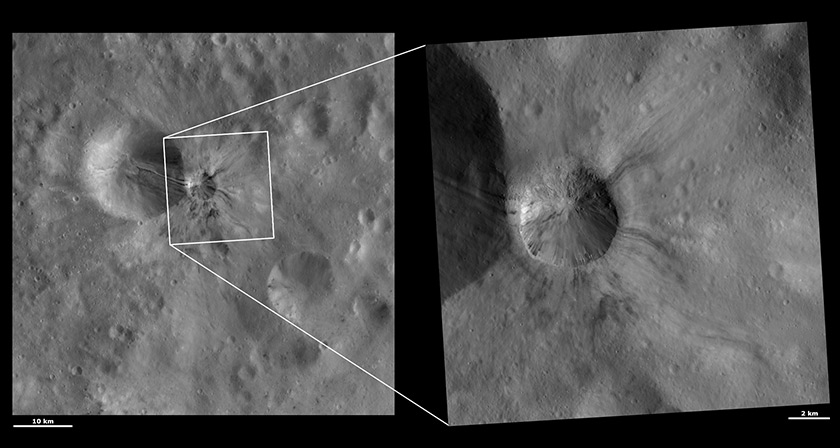 Investigating the higher-resolution photo, I continue to think that Aelia is a very pretty crater, but there are also some neat things to observe. First of all, the darkest streaks within the crater seem to originate below lumps in the crater wall. I'm not convinced that those lumps line up into layers, but they certainly speak to a composition that varies considerably with depth, which is pretty cool.

I love the texture of the ejecta and its wavy flowiness. Look at the upper right portion of the ejecta and you can see an interesting planetary geology process at work. Planetary scientists like to use the density of cratering as a proxy for age: More craters, older surface. Surfaces with few craters must have had their older craters erased somehow, either by wiping them away, covering them up, or modifying them so much that you can't discern them anymore. If you look at that ejecta field, you'll see subdued-looking medium-sized craters (maybe 500 to 1000 meters in size) and fresh-looking teeny craters, but not a lot in between. The ejecta is a pile of gravel mantling the old surface. It was thick enough to completely fill smaller craters, but too thin to fill the larger 500-meter-ish ones, so we can still see those, but they look very faint. The smaller, fresher craters happened after Aelia, and if you look elsewhere, you'll see those smaller craters everywhere.

I just checked the Small Bodies Node at the Planetary Data System and the image data is not there. (It was once, but then it was removed, and it's now public knowledge that it's being held up by a conflict over what coordinate system to use to describe locations on Vesta.) This is such a lovely data set -- I can't wait to see what space enthusiasts can do with it!

Both the small and large craters are not impact craters, but calderas with volcanic flow structures. Is that not obvious? Impact craters do not create flow structures. A rounded edge and a sharp edge on a single caldera are not due to slumping, but due to melting because of a linear volcanic or igneous feature. Does that not make more sense? Vesta is covered in calderas. Why are we concentrating on the few impact craters? Chris Landau(geologist) 14th August 2012

Sorry, Chris, but there is actually no obvious evidence yet for volcanic structures on Vesta. Impact ejecta displays fluid behavior, especially in the low gravity on an asteroid. The rounded edge and sharp edge on the crater result from the crater being on a slope (some regional slopes on Vesta are at the angle of repose), so that the upper rim collapses and runs out over the lower rim. Volcanic structures on things with no atmospheres are often rimless because any amount of gas in the lava makes them quite explosive (see Io and Mercury and the Moon for examples of rimless volcano structures). Try reading the LPSC abstracts from the March meeting on Vesta geology to get some background!

Hi Emily. Thanks for taking the trouble to reply. I have followed the photos of Dawn's photos of Vesta ever since they were no better than the Hubble smudge photos. I have spent months pouring over the "photos of the day" and drawn very different conclusions to what is being stated. I do not know the craters of Mercury. Io’s whole surface is a bubbling mass of Lava. I do not think, one can actually talk about crater rims, if the whole surface is continually bubbling and active Let us summarize what we are dealing with on Vesta as far as geology is concerned. Vesta is basically composed of basalt (pyroxene and feldspar). I will not discuss HED'S. They are a distraction. Now not all volcanoes are high explosive volcanoes like Mount St Helens which would have had great COMPRESSIVE forces at work where continental plates are being forced past each other, underneath each other or where you might have Oceanic plates being subducted under continental plates. These explosive volcanoes have a high water or carbon dioxide content and a high silica content. Etna in Sicily is another example. Their and lava and high silica ash is highly viscous 9thich and glue like) Steep side volcanoes are created. Breccias type igneous rocks, filed with angular fragments are the order of the day and you might have a Porphyritic, basalt, andesite or dacite(higher silica content) This dwarf planet is composed of lava that is oozing out like Hawaii’s volcano or the volcanoes of Iceland. This type of lava is a low viscosity lava (it flows easily and is a thin lava). It does not posses much silica and it is not under great pressure, because it forms where rocks are being torn apart (Mid Atlantic Ridge for Iceland and hot spot for Hawaii). This type of lava forms in low stress areas.This planet is a “stretch” planet. Look at its shape. It is an OBLATE SPHEROID created by rapid spin. It spins in just over 5 hours, faster than any other known large planetary body spin in our solar system. It makes Jupiter and Saturn look slow with their 10 hour rotation speeds. There are no compressive forces at work here. Volcanic cones or calderas will not have steep sides. Now if you have ever walked over a lava flow or basalt or andesine, you will notice it is a very compact solid rock. It is dense and the crystals are melted together. Think of a granite kitchen counter top. Lava is NOT a beach sandstone with crumbling, slumping separate loose grains. Vesta is a LOW GRAVITY PLANET as you correctly state. What is all the talk about slump features on a low gravity planet. There is no wind and no water to create great weathering and for weathered rock detritus to accumulate that will slump. The lava is a hard igneous rock that is crystalline. Crystals are melted together. They are not separate grains of sand. They do not slump. Now Vesta is also a low silica planet. Basalts generally have very little silica and I think that as we see no evidence of water on this magma planet, we can rule out high sided volcanoes. Volcanoes will be very flattened, but Basalt is a hard crystalline rock, so in order to leave one side sharp and another rounded, you will have to melt that one side. The difference in slope from one side of the crater to the other of the surrounding area is too little to make a difference in a low gravity world. The rock is crystalline, not sandy. We need to melt it to give one side a rounded appearance. On Earth or on other planetary bodies, when lava is extruded in a long line or fracture, we call this igneous linear body a dike or dyke. These lava vertical or near vertical bodies can be a few feet wide to many miles wide and can run for hundreds of miles. They are often associated with volcanoes and can create or fill fractures in all compass directions or simply be orientated in one say north-south or NE-SW. Vesta is covered by fractures and dikes, as can be seen from zid-zag patterns, tangential arcs and long lines of micro calderas that are often colored black. As these lineaments pass between two craters, you will see that the two sides closest to the lineament are rounded and smoothed from melting and the two exterior crater walls or caldera rims, furthest from the lineament remain sharp. This is such an obvious feature of melting of the rock closest to the hot rock source, it is classic Geology 101. I do look and I do postulate other causes when things do not make sense. The two supposed giant impact craters at the South pole on Vesta, out of the plane of the ecliptic, away from the “line of fire” of asteroids and comets in the same location at the south pole, do not make any sense. It is a silly idea. The images tell a very different origin. Every crater is not an impact crater or a volcanic caldera. There are other geological ways of creating circular depressions in lava and other ways of forming giant mountain peaks, besides volcanism and impact rebound central mountain cones. Vesta is truly amazing. There are at least 6 astounding planetary wide features associated with this oblate spheroid that help one to understand the features on other planets and moons including Earth. Dawn’s team needs to spend a lot more time looking and not handing out ‘pat run of the mill explanations.’ Their engineering team has been grand. Their geologists are still sleeping. Please see the photo on the JPL website where you can “see “dikes in action melting one side of craters and calderas. http://dawn.jpl.nasa.gov/multimedia/imageoftheday/image.asp?date=20120402. Image presented April 2,2012. Image taken Oct 21, 2011 of Helena Crater. http://dawn.jpl.nasa.gov/multimedia/imageoftheday/image.asp?date=20120330 Image presented March 30, 2012 Chris Landau (geologist) 16th August 2012