I waited all day for these images to appear on the Curiosity raw image website, and they're finally here. It's past my bedtime; but how can I not play with these images? And holy guacamole, is it a pretty place we've dropped this big beast of a rover into!

Where to start? First, I've been very curious to see how much of the dust that was disturbed during the landing settled on top of the rover deck. It actually looks less dusty than I expected -- but look at the size of the gravel on top of it! 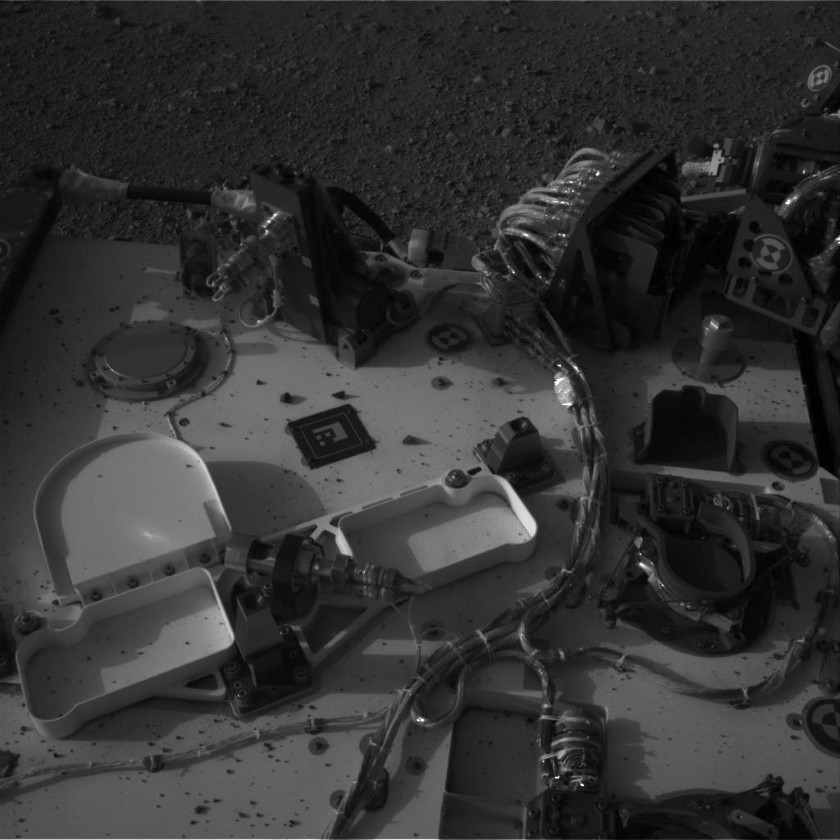 A Navcam view of Curiosity's deck on sol 2 shows gravel kicked up during the rocket-assisted landing. The image has been brightened to show more detail of the complex rover's upper surface.

Here's a terrific mosaic of the Navcam images that have come down so far. This is a rover that has just touched down at a new place on Mars. It's still blowing my mind. 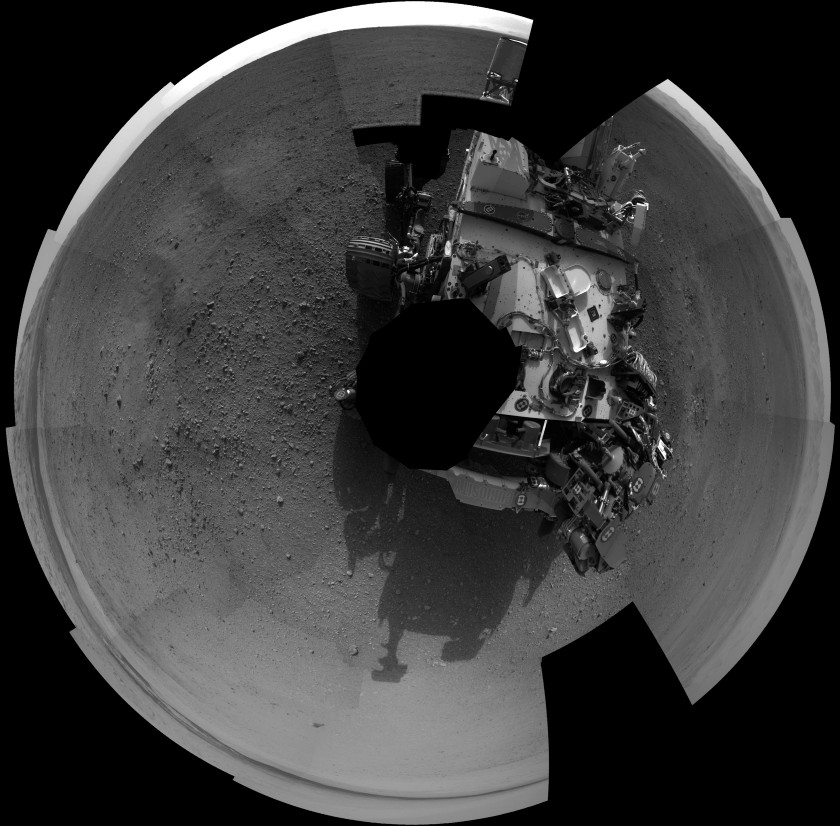 A mosaic of 20 full-resolution images taken from Curiosity's left Navcam on the second day after landing shows the rover, with a dirty deck, sitting on a gravelly plain, surrounded by mountains. This version is missing two frames and part of a third.

There's two frames missing and one that was partially transmitted, but it's quite enough to feel the rover sitting on the surface of Mars. What I find particularly striking about this point of view is the way that the Navcam can see right through the gap separating the rocker-bogie assembly (the big titanium tubes that support the rover's wheels) from the rover body. The rocker-bogie assembly is connected to the body only at a single pivot point, with the two rockers connected through a differential across the top of the rover. I've never found it easy to understand how this works so well to keep the rover body level while the wheels climb obstacles larger than the wheel diameter, but it does work.

Next, let's look to the south, to that mountain that we want to climb. The Navcams do not reach high enough to see the top of the mountain yet -- that'll have to wait for another day. But if you zoom in on the part of it that you can see, there is a lot to be excited about. The dark lines are the sand dunes that we want to avoid. Mixed in with them is some other kind of surface that is quite bright. The changes in albedo (brightness) as you go from the medium tone in the foreground to the bright tone int he middle ground over the black dunes to the medium toned base of the mountain to the brighter knobbly hills really is thrilling. Why? Because Mars tends to be so monochromatic due to the ubiquitous dust.  If we can see albedo changes like this, it can't all be covered in dust, or at least it's not very much dust. We're in a very non-dusty place, where the soil and rocks are laid bare, showing us their different colors.

Zooming in toward the foothills of Gale's central mountain, the diversity of geology in Curiosity's landing site is obvious.

Can we start driving yet? Now? Please?

I don't want to forget to show you the awesome full-resolution MARDI images. In the first one, with the heat shield just fifteen meters from the rover, you can see the wiring and the stitching on the thermal blanket. They're mind-boggling. I don't have time to do much with them right now -- I've got to sleep at some point -- but here are direct links to all of the full-res images that are down so far, for your viewing enjoyment.

Looking through the MARDI images, particularly 256-440, there appears to be a patchy yellow top soil near the bottom half of the images contrasted against the "redder" crater floor. The placement of this yellow top soil is consistent throughout the image set, but is this color true and could it be associated with a different mineralization compared to elsewhere? Does MRO data correlate with this?

Any idea what is the hardware we are seeing in 564, which i am guessing is the shadow in 600?

Here is a good explanation of how the rocker bogie of the rovers work--using Lego rovers no less: http://www.alicesastroinfo.com/2012/07/mars-rover-rocker-bogie-differential/

bstrom: I believe the hardware you see is a wheel. It pops into view when the wheels leave their stowed position and remains visible after touchdown.

This may be a dumb question but what are the white rectangles & D shaped areas that appear to be empty boxes in the first image?

Emily, thanks for the continuing great coverage. I have a question that you may know or you might choose to ask at the press briefing: Why don't we want to drive Curiosity through the dunes? NASA included the dune field in the planned landing ellipse, so there was adequate review and comfort with operating Curiosity in the dunes, but I have heard more than once that the dunes will be avoided. I'm confused. Thanks.

hello, does anybody know, what the purpose of the label on the right edge of the first image is?

Sorry I'm late with these answers -- it's been a busy couple of weeks. @Curt: driving through dunes is inexact and fraught with peril. Much better to stick to hard rock. However, the dunefields within the ellipse were relatively benign, and also, being at the edge of the ellipse, they represented a relatively low likelihood of being the landing location. When you convolve that with the risk they presented, the team deemed it OK to include them in the landing ellipse. But Curiosity will avoid dune driving and the concomitant slippage and lack of interesting science targets. Mario: Those are marks to help the rover precisely locate its own parts in 3D space.