A "long" view of the Curiosity Descending image

I thought you guys would enjoy this. The HiRISE team has released the full-resolution, not-map-projected version of the photo they took of Curiosity descending under parachute. The full version may be downloaded here (scroll to "descent long view"). If you download the whole thing, you'll notice it's made up of a number of strips that aren't perfectly aligned. That alignment will take time, for reasons explained by Timothy Reed in a blog entry he wrote about the HiRISE imaging of Phoenix. In the meantime, I've sliced out the strip that contains Curiosity, and am presenting it here at half its full scale. Here is the full-scale version of the image below in JPG format (about 5 MB). But before I do that, look, it's the heat shield! 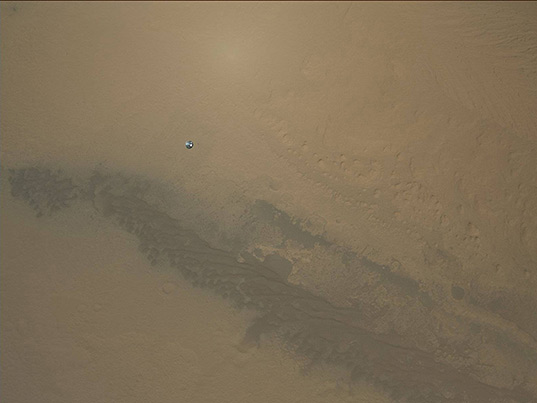 OK, now for that strip containing the spacecraft:

How fortunate to have eyes in the sky to catch these images. I'm sure the orbiter will continue to supply us with many more surprise shots in the future. Good work, Mr. Reed.

Thanks for this picture. I think I found the location where the Rover is landing on CTX image B01_009927_1752--along the left edge. However, the features on the CTX image are much smaller than in the picture you posted.