In 2008, Mars Reconnaissance Orbiter snapped an amazing photo of Phoenix descending to the surface of Mars under its parachute. Now it's repeated the feat, with Curiosity. I think this image pretty much speaks for itself. Absolutely stunning. 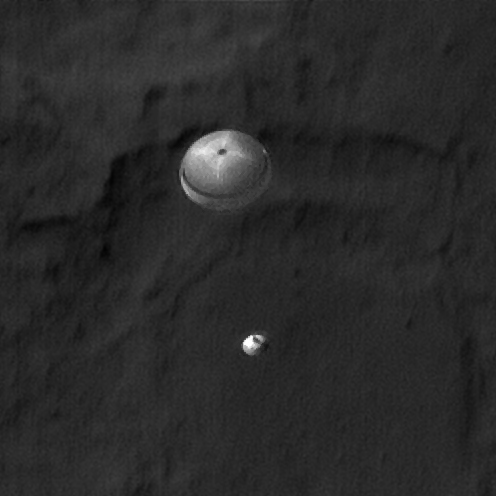 For more on how this image was taken -- and how hard it was -- check out Eric Hand's article at Nature News.

I want you to sit back and think about what was going on when this was taken. Both spacecraft were operating totally autonomously, based upon commands uplinked to them a long time before. (Some timing parameters were updated hours before.) This is a spaceship at Mars, and we have a photo of it in action, just minutes before its historic landing. Incredible.

This image leaked before it should have. There's a press briefing coming up in 16 minutes (as I write this). I hope to see a wider view of it at the briefing. Stay tuned!

I'd love to see the calculations/math that made this photo possible. I bet it's beyond anything I could understand, but it would be fun to try.