Got questions about Curiosity? I've got answers for you

A few days ago, JPL and NASA released their media press kit for the landing of the Curiosity rover on Mars. (It's a PDF, 5.5 MB.) A press kit is a document designed to provide the media with answers to all of the basic -- and many not-so-basic -- questions they may have about what a spacecraft is, what it does, what it's made of, who made it, who runs it, why it's going to Mars, when major events can be expected to take place, what it might find, what it probably won't find, how it fits in with past and future Mars missions....hopefully you get the picture: it's packed with facts.

And while it's called a press kit, it's not just for the press; even if you're not a member of the media, you can read it, too. In fact, if you've ever asked yourself any question about the Curiosity mission -- and I hope that includes every single person reading this blog, whether you're a space fan or a scientist -- you should read the press kit. Googling for answers to specific questions is fine. You can ask me questions, too, which a lot of people do, but you'll answer your question faster by reading the press kit. What's more, you'll learn a lot of answers to questions you didn't know to ask. If you already know a lot about the mission, you'll learn how to talk about it in ways that make sense to people who don't know a lot about it.

I'm reading the press kit right now and am learning a lot of stuff I didn't know before, and being reminded of answers to frequently asked questions. For instance:

And that's just a small selection of the information available in the press kit. So: I'm assigning it to you all as homework. If you're going to be watching Curiosity land, read this first! You never know when I might make you take a pop quiz! 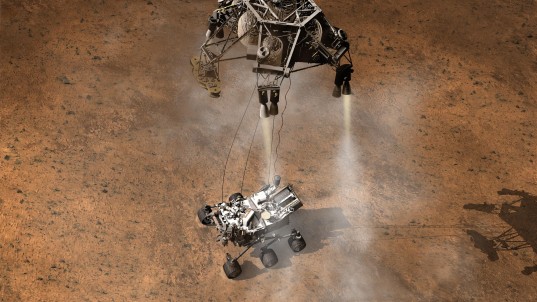 In this scene, Curiosity has touched down onto the surface. The spacecraft has detected the touchdown, and pyrotechnic cutters have severed the connections between the rover and the spacecraft's descent stage.

Are you giving odds on successful landing?

Odds? Not calculated -- WAG -- I'll give 30% and that's because I want MSL to land safely. The SkyCrane is why I give it a 70% chance of failure. I do want MSL to succeed, I just fear it won't because of the SkyCrane. Then the partial flyaway ending in a CAB. Shrapanel and blast wave ...

Hey Emily - well since you are offering, here's one Guy couldn't answer for me last year (and I see they still didn't fix the "3893 kg launch mass" typo I pointed out) - I still haven't seen a consistent mass breakdown for the descent vehicle - I have / Descent stage 829 kg dry, prop 387 kg, heat shield 385 kg, backshell 349 kg, 6 EMBD weights 150 kg, 2 CMBD weights 150 kg, which leaves 151 kg missing of 2401 kg total./ Just a heads up to be on the lookout for better numbers for these components as you come across other documents...

I'm not a space pro, just a 57-year close observer of all things space... I'll see your 30% and raise you to even odds. Recent track record good, but lots of moving parts on lots of brand new tech. And as we are always reminded, Mars is a tough place.

Does the rover have the ability to remove dust from its instruments, in particular the cameras? We all remember what happened to Mini-TES, alas?

Hey Doppler, I would give odd of 70-80%. I say this since EDL is such a huge part of this project and they have an experienced, talented team. I would feel better if they did not use the sky crane and just powered down all the way (with proper protection of the instruments). Contrast this with the Beagle "landing". Before the landing, Colin Pillinger spent a lot of time discussing the capability of the lander, but EDL seemed like an afterthought to him. Ooops.

If this is successful, it will definitely be a "moon landing" moment.

The more I read about MSL the more my head spins. It has so many systems with so many options. It is inconceivable that all these systems will work exactly as planed and work perfectly in concert with each other. I just hope that the press does not focus on one tiny malfunction instead of the good stuff that does work. We are seeing this already with the whining about florocarbons on the drill bits. Huffington Post ran an article on all the Mars failures and how risky MLS is; it is almost as if they want it to fail.

Okay, so Curiosity has a death ray AND a force field. Now all it needs is a transporter beam!

... and a name change to Enterprise. She'll need the reputation preceding her to ensure a safe landing!

Is there a post landing schedule of events on MSL? What events of interest will happen in the hours after touchdown? I will watching at 1:31 A.M. here on the East Coast and was wondering how much longer we will have to wait to hear the status of the rover. How long until the first (MARDI?) images come down?

I have been reading the 61 page press brief (I am pretty sure that Emily and I will be the only members of the press to do this!) and found a possible error about the APXS. Here it is: "... the specific isotope used in all Mars rovers’ APXS instruments is curium 244, which has a half-life of 18.1 years. this makes it ideal for long-duration missions, where even after more than seven years of the Opportunity mission, the loss in activity is hardly noticeable." I thought that Opportunity's APXS's required much longer integrations now....

As we all know, Earth has received a small trickle of Mars samples via rocks blasted off Mars' surface by meteorite strikes and an subsequent SNC meteorite falls on Earth..... As of August 6, we can be assured that at least one Earth rock has reached Mars; the APXS instrument has a piece of terrestrial basaltic rock slab for calibration!

The press briefing said Mars has 1/10th the mass of earth. Why is gravity on Mars 38% of earth rather than 10%?

Dusty, The reason is the diameter of Mars is less than earth. The equation for force from gravity is F = G*m1*m2/r2... where r is the distance between the centers of mass. Sitting on the surface of mars you are closer to the center of the planet.

I see there is no Mossbauer gamma spectrometer on Curiosity: Is its function entirely replaced by the CheMin X-Ray Diffraction instrument ? According to the Press Kit, "Each CheMin analysis of a sample requires up to 10 hours of accumulating data while the X-rays are hitting the sample." ....that seems awfully long ! ....about the same as when the MER's Mossbauer Co-57 sources became depleted. What are the pros & cons of each type of instrument ? How are they complemented by the Alpha Particle X-Ray Spectrometer (APXS) ? PS. I agree with a previous post pointing out how unbelievably awkward it is to post a comment on here.... PLEASE do something about it !!!

There are some other interesting MSL videos out there besides the viral 7 Minutes of Terror. Here is a more comprehensive video about the rover instruments. The fun thing is that the narrator sounds like Dr. Carol Marcus describing the Genesis project in Star Trek: The Wrath of Khan. I am not sure if this was done intentionally by JPL but it is very entertaining to watch: http://www.youtube.com/watch?v=GUQ91fdYbP4 There is a really great video about the geology of the landing site by Matt Golombek. Golombek is fantastic: http://www.ustream.tv/recorded/21799427

The big problem I see with MSL (and MER) is a design flaw in its mobility system. The problem is the wheels. I have done some driving on loose sand beaches on Cape Cod, and the important thing is to have huge, smooth, soft tires. Some drivers will actually let air out of their tires before driving on the beach. MSL and MER have the opposite or what you want: small, hard, knobby wheels. We already saw the disastrous results with Spirit and and almost disastrous results with Opportunity. And MSL will face a line of sand dunes between its landing site and the clay layers at the base of Mt. Sharp; yikes.