A fifth moon for Pluto, and a possible hazard for New Horizons

I've caught up on two weeks' worth of email accumulated over my vacation, and I think it's safe to say that the biggest news from my absence was the announcement of the discovery of a fifth moon at Pluto. I could write a blog entry about this discovery, but it would be nearly identical to the one I wrote for the discovery of Pluto's fourth moon last year, and I wouldn't have much to add to the HubbleSite's typically thorough public information package on the finding. Instead, I'll focus on what this means for New Horizons, which will pass through the Pluto system almost exactly three years from now, on July 14, 2015. 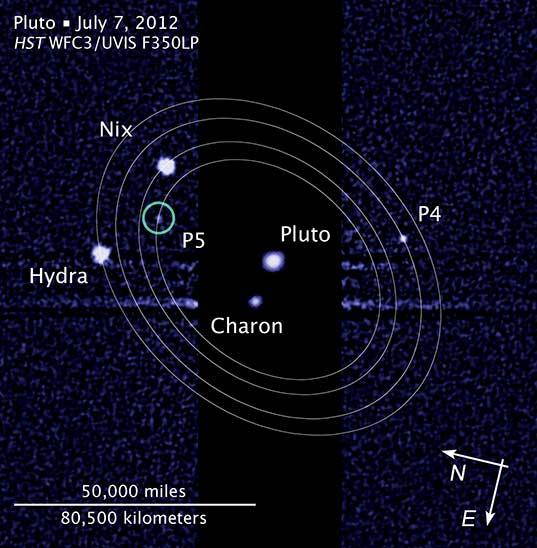 Scientifically, of course, the discovery of a new moon means there's one more moon for scientists to study, which is both good and bad. It's good because scientists like discovering and exploring new things. It's bad because the New Horizons science plan is already packed to the gills with observations; adding new observations of new objects requires giving up observations of other things. There's a complicated trade that must be performed among spacecraft resources, value, and uniqueness of science results.

With moons Nix, Hydra, P4, and P5 being so small, it's unlikely we'll get images that resolve much of any detail on their surfaces, no matter what. The best-resolution images will be at about 3 kilometers per pixel, which will yield roughly 35 pixels across Nix (106 kilometers diameter), and 25 pixels on Hydra (81 kilometers); P4 and P5 are even smaller. [Note: the preceding sentence is not accurate; actual resolutions will be better by factors between 2 and 10. I'll explain in more detail in a future blog post, and post a link here. --ESL] Keep in mind the fact that New Horizons' encounter with Pluto has geometry similar to Voyager 2's with Uranus. Because Pluto's equatorial plane (the plane in which its moons orbit) is highly tilted, New Horizons will see Pluto's moons orbiting it with a bull's-eye sort of geometry. As a result, New Horizons can only pass closely by at most one moon; it'll see all the others from greater distances.

In fact, the current plan has New Horizons traversing the Pluto system at a distance somewhat inside Charon's orbit, at a time when Charon will be on the opposite side of Pluto. Nix will be closer to New Horizons, but is, of course, much smaller than Charon. 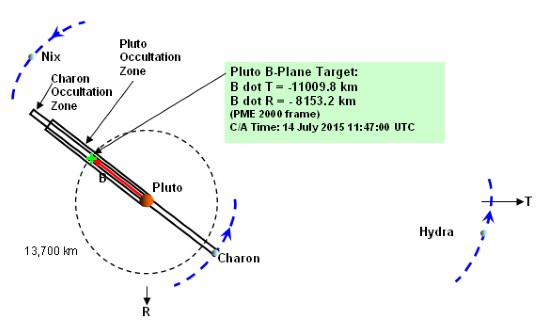 So there'll likely be little, if any, change to New Horizons' science plan as a result of the discovery of P5 -- not for scientific reasons, anyway. But P5 is symptomatic of a looming problem for the mission, in the form of an unanswered question: is New Horizons' trajectory through the Pluto system safe, or is it likely to run into debris large enough to kill the spacecraft?

I first learned about this problem a year ago, at the New Horizons Workshop on Icy Surface Processes. Alan Stern showed a graphic during his presentation that strongly suggested two places where previously undiscovered moons may be lurking on stable orbits beyond that of Charon. Where a moon can orbit, smaller particles can orbit; and there is likely to be a large population of particles blasted off of Pluto's mini-moons by meteoroid impacts. Pluto may even have a ring system; if it exists, it's likely too faint to be discovered by Hubble.

New Horizons can handle impacts from very small particles, but anything larger than 400 microns (that's sand-grain-sized) could be catastrophic. Based on what we know now, there is a serious risk for New Horizons to experience one or even more such impacts. What do we do?

We plan. Hal Weaver made a presentation to the recent Small Bodies Assessment Group meeting recently to explain the hazard and to identify the plan to mitigate the risk presented by possible dust in the Pluto system. Here's the gist:

1. Things you can do with the spacecraft. Since New Horizons has already been launched and is, in fact, beyond the orbit of Uranus, there's nothing we can add to it to improve its shielding. The only thing you can do is to turn it in a direction that minimizes the risk to the spacecraft. Cassini does something like this to mitigate dust hazards as it passes through Saturn's ring plane, turning its high-gain antenna to the "ram direction." But if New Horizons did that during its crucial moments of closest approach to Pluto, it would miss a lot of really important science data, so this would probably only be done as a last resort.

They also need to look at the question of how large a particle poses a risk to New Horizons. Obviously, they have examined this question before; presumably, survival of impacts smaller than sand-grain size was part of the engineering requirements for the spacecraft. But they can certainly examine it much more closely, with new, more sophisticated modeling of the problem. If it turns out that New Horizons is likely to survive more than 10 sand-grain-sized impacts, the hazard is pretty much gone. Now, this rosy scenario is unlikely to be true, but it is likely that some very conservative assumptions were made about New Horizons' ability to survive such events, so a re-examination of the problem is likely to result in some reduction of the risk we think the spacecraft is subject to.

2. Things you can do to prevent data loss. Even with New Horizons' relatively large 2.1-meter dish, the distance to Pluto is so great that New Horizons' data transmission rate to Earth quill be quite low, around 1 kbps. Nearly all of the science data acquired near closest approach will be saved onboard for later transmission, a process that (with redundancy) will take about a year. So if New Horizons is lost at closest approach, nearly all of the highest-value science data would be lost with it. So the team is inserting two extra data downlinks, one each at 1 and 2 days prior to closest approach, to increase the amount of data that will definitely be safely on Earth before New Horizons encounters the hazard.

3. Things you can do to determine whether there really is a hazard. The current concern is based not on any actual discovery of sand-sized particles in Pluto's orbit; it's based on modeling that suggests that they could be there, plus the current observational limits on what might be there. The current observational limits say that there could be enough particles for New Horizons to suffer as many as ten catastrophic impacts. But that's just an upper limit. The reality is likely smaller, but we can't say whether it's a little bit smaller or a lot smaller.

To fix this problem, you can do more observations! In fact, it's exactly those observations that resulted in the discovery of Pluto's fifth moon, and that may result in the discovery of even more moons. The team has already performed observations with Hubble and Keck 2, with more Keck nights coming up next month, plus a stellar occultation to be observed by the Southern African Large Telescope. Based on the analysis of the Keck results, they may get time on Gemini and the Very Large Telescope.

And of course New Horizons can help, but not until pretty close to the final encounter day. They've added in some extra satellite and debris searches with their LORRI camera at 27 and 17 days before closest approach.

Another way to fix the problem is to poke at the models that suggest that the problem exists. They need to improve the sophistication of the models, particularly to deal with the fact that the problem really can't be reduced to two dimensions, since debris will find orbits inclined to the plane of the moons' orbits. Three-dimensional modeling is challenging and time-consuming. The New Horizons team has "assembled an international team of experts to investigate models of particle orbits in the Pluto system," an effort that kicked off with a workshop in Boulder last November.

4. Things you can do if there really is a hazard. If they decide that the current planned route through the Pluto system really is unsafe, then they will have no choice but to change the trajectory and fly past Pluto at safer location. They haven't yet decided where that specific point would be, and it will  require a complete redesign of most of the nearest-encounter science plans, a process that will take a year. The safe route, known as the Safe Haven Bail-Out Trajectory (inevitably abbreviated SHBOT and pronounced "Shabbat") could be executed as late as 10 days before closest approach, with New Horizons about 10 million kilometers from Pluto. This effort has been discussed for about a year, but will begin in earnest later this year with the selection of an aimpoint for closest approach.

I sure hope that further investigation shows that the current trajectory is a safe one. But better safe than sorry. I'll be keeping a close eye on the problem of New Horizons' safety as work progresses!

A note to commenters: As I've mentioned before, I'm tired of every post that mentions Pluto resulting in the same comment war about Pluto's planethood. Don't be Troll #4. I will delete any comments on that topic.

How long is transmission time on round trip commands sent to NH when it is in Pluto's vicinity.

It takes light roughly 8 minutes to travel one AU, from the Sun to the Earth. Pluto is roughly 40 AU from the Sun (and the Earth). You can do the math.

I'm just happy to know that Pluto is going to be a very interesting place to visit. If it had been (as was at one time imagined) a big, featureless iceball in the middle of empty space, it would have been a bit of a disappointment. The surprise is finding that a large KBO has such a complex system. How many other KBOs might be similar, but haven't been studied enough to reveal bodies as small as P4 and P5?

I still remember the astonishing Miranda flyby in 1986, I'd like to be shocked again. I believe that it's not even impossible to discover a Charon satellite. Pluto's gravity it's not so dominant in this system.

The new horizons team is using Hubble to search for moons and rings around Pluto. Isn't it better to look for rings in the infrared and sub mm? Telescopes such as Herschel, Spitzer, WISE (dormant), Sofia (airborne IR) or even ALMA.

Why is it that four f the moons have an elliptical orbit? have noticed that amost all natural satellites have a near rou or round orbit.

@hemanth, the moons do not have elliptical orbits; they are very nearly circular. But their orbital plane is tilted with respect to the ecliptic, so when seen in the sky they appear elliptical.

Why weren't these moon discoveries made years before the New Horizons probe was launched? These moons were found with the HST which was available for over 10 years prior to launch so it seems like negligence. Since Pluto was the main objective of this expensive project, I'm confused why they wouldn't prepare like that.

Josh, I now have an answer to your question (though I phrased it a bit more tactfully): http://www.planetary.org/blogs/emily-lakdawalla/2014/02191127-predicting-plutos-moons-and-moondust.html