Welcome to my monthly roundup of the activities of our intrepid robotic emissaries across the solar system! Sorry I'm a little late this month. I am frantically preparing for a two-week vacation during which I will not be reading email or even, I hope, looking at a computer at all. I've queued a couple of posts to fill the gap, but won't be writing anything new until July 16.

This month I have promoted Curiosity to the top, as its landing is only a month away! I know where I'll be for that -- in the Von Karman auditorium at JPL, biting off my fingernails -- but for those of you who aren't media or didn't make it into the Tweetup, you can join others at Planetfest events, either here in Pasadena or in satellite locations around the world.

Other news for the month: Opportunity has rolled through sol 3000; Odyssey is back online, having switched to a spare reaction wheel; Dawn is now in High-Altitude Mapping Orbit 2; and Cassini is taking advantage of its newly inclined orbit to get spectacular series of images of Saturn's rings.

Here's Olaf Frohn's diagram of where all our wandering spacecraft are as of today, July 1. Compare it to last month's to see how things have moved. I count 16 spacecraft that are actively performing 13 scientific missions at Mercury, Venus, the Moon, Mars, Vesta, Saturn, and at the edge of the heliosphere, while another 9 are cruising to future destinations. And my count doesn't include all the spacecraft observing Earth, Sun, and points beyond our Sun's reach. 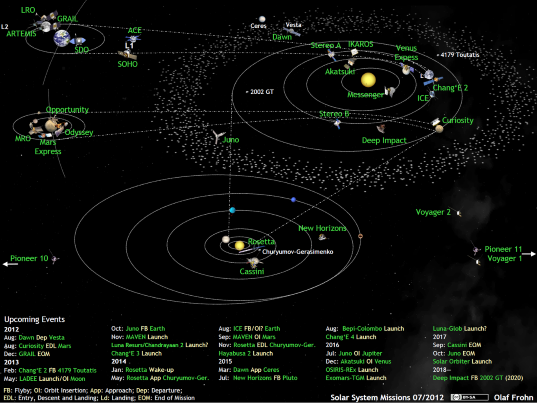 A widescreen version of this diagram suitable for presentations is available here.

Curiosity, or Mars Science Laboratory, is bearing down on the Red Planet, now 15 million kilometers from Mars and closing. Only 34 days remain until landing. Just writing that sentence makes my heart jump. I've gotten my media credential to be up at JPL throughout the landing weekend. The landing will happen on August 6, 2012, just after 5:00 UTC (August 5, after 10:00 p.m. here in Los Angeles). On Mars, it will be in the midafternoon of a late winter day in the southern hemisphere at the landing site at 4.49°S, 137.42°E. Its nominal mission will last one year but it should go on much longer. On Earth, the Planetary Society will be hosting a huge Planetfest event, gathering thousands of space fans to celebrate this momentous event together! I'll be putting in brief appearances at Planetfest but will be spending most of my time having an anxiety attack about the impending landing up at JPL.

NASA's MESSENGER spacecraft has now orbited Mercury more than a thousand times; on its new, faster, 8-hour orbit, it'll take only 11 months to do another thousand. As always, check out their image gallery for the latest goodies. Here's a cool one showing an example of Mercury's widespread chains of rupes, or scarps.

ESA's Venus Express Venus orbiter remains in orbit on a mission that has been extended through 2014. There hasn't been a mission status update posted to the Venus Express Science & Technology site in the last month. Venus Express was active during the recent transit of Venus. For Venus Express, it was like any other day -- the geometry that produces a transit as seen from Earth doesn't result in any particularly special day at Venus -- but Venus Express' in-situ measurements of Venus Express' atmosphere on that day will provide useful context for Earth-based observations attempting to detect that atmosphere, using Venus as a stand-in for an atmosphere-bearing exoplanet transiting another star.

Ebb and Flow, the twin spacecraft of NASA's GRAIL mission, are in between their primary and extended missions. They must readjust their orbit, switching places, before begining their extended mission on August 30. The MoonKAM website now lists more than 86,000 images.

As I discussed in blog entries earlier last month, China's Chang'E 2 lunar orbiter departed the Sun-Earth L2 point some time in April and is now en route for asteroid 4176 Toutatis. Probably the best place to watch for news about this mission is the Chang'E 2 forum at nasaspaceflight.com.

NASA's Lunar Reconnaissance Orbiter is quietly continuing its mission at the Moon, producing insane quantities of data; two weeks ago, they sent nearly another 30 Terabytes of data to the Planetary Data System. A recent highlight from their captioned image gallery is this oblique view of the enigmatic "lunar swirls" of mare Ingenii.

Out at Mars, days are lengthening in the south as winter presses on. (It's currently Ls 133.4 of Mars Year 31.) The Mars Exploration Rover Opportunity is in the middle of sol 3000. Yes, its 3000th sol!! I know that no number is more special than any other, but seeing that odometer turn over always makes one look back and take stock. For the rover, there was a lull in activity last month due to problems with the Odyssey orbiter precluding much in the way of communications (more on that below). But Opportunity has now made it to the northern tip of Cape York, and performed the first "RAT grind" in a very long time, drilling a shallow hole into some gypsum-rich rock. As usual, you can follow her daily activities along with other rover huggers at unmannedspaceflight.com. Here is Eduardo Tesheiner's latest route map and Google Earth kml file for Opportunity, up to date as of sol 2989.

ESA's Mars Express is carrying on with an extended mission, planned to run through 2014. They just posted an interesting article about a detailed study of rocks exposed in the southern highlands of Mars, recently published in Icarus, that indicates a lot of different kinds of water alteration of rocks deep undergound in Mars' ancient past.

NASA's Mars Reconnaissance Orbiter is keeping an eye on Mars' weather with MARCI. Still lots of water ice clouds especially in the northern hemisphere and around the peaks of the great volcanoes, as is usual for this time of Mars' year. As always, check in on the latest captioned image releases from HiRISE for your dose of spectacular photos. This one containing two adjacent, similar-sized craters with very different appearances is a lovely lesson in the law of superposition as interpreted from orbital photos.

NASA's Mars Odyssey suffered a breakdown in one of its three main reaction wheels on June 8. Engineers carefully assessed the situation to determine the best course of action, and they determined that the sticky wheel was "unreliable." So they switched over to the spare reaction wheel, and announced that Odyssey was back up and running on June 27.

NASA's Dawn asteroid orbiting spacecraft reached High-Altitude Mapping Orbit 2 on June 14, and resumed its photographic survey of Vesta on June 24. Keep watching their daily image releases for cool new views of the lumpy world. They're releasing a lot of image pairs with a brightness image on the left and a topographic map on the right. The irregular shapes of the images make it clear that they're map-projected. They often release several in a row that overlap; it seems like someone could make a pretty nice mosaic of a large part of Vesta by working with these released pairs. (Just a suggestion! I don't have time to explore this.)  In August, Dawn will depart Vesta for Ceres, which it will reach in early 2015. Here's a timeline summarizing the Vesta phase of the Dawn mission.

The NASA-ESA-ASI Cassini Saturn orbiter is on the outbound leg of its Rev 168. It just passed through a very busy periapsis passage, performing tons of rings observations, some imaging of Titan's south polar vortex, and getting a nice high-resolution mosaic on Tethys. Cassini's orbit inclination has climbed to more than 21 degrees, and the views on the rings are getting better and better. Get used to rings; this inclined phase of the mission will last until March of 2015. The next rev features a fairly close, 1000-kilometer flyby of Titan on July 24. To see what Cassini's doing when, check out my long and detailed page on Cassini's tour of the Saturn system, and look to the Looking Ahead page for more detailed information.

NASA's New Horizons has 8.85 AU to go to reach Pluto.  There are 1106 days left until Pluto closest approach. Last month they commanded the spacecraft to perform its Pluto encounter sequence, spinning this way and that to target instruments, as a test to see if it performs as expected. Please join the search for New Horizons' Kuiper belt target at Cosmoquest's Ice Investigators site. New Horizons is on course for a January to July 2015 encounter with the Pluto and Charon system.

JAXA's Akatsuki is now in solar orbit, on its long cruise to a second encounter with Venus. A mission update posted May 11 that I hadn't noticed before confirmed that they successfully vented 65 kilograms of oxidizer, no longer needed after the loss of the main engine. They still plan to attempt orbit insertion using the reaction control system in November of 2015.

JAXA's IKAROS is now hibernating. It was last heard from on December 24, 2011. Regular attempts are now being made to re-contact the spacecraft. According to the IKAROS blog, the last one, on June 29, was unsuccessful; the next one is scheduled for July 14.